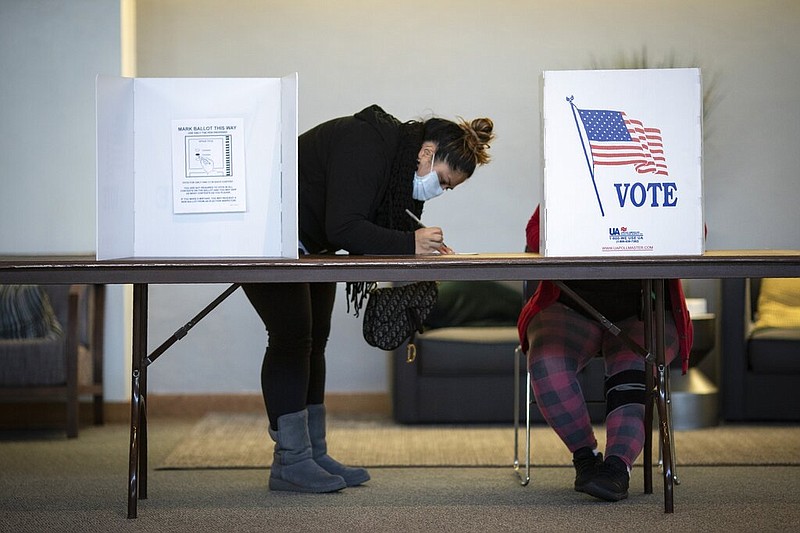 Voters mark their ballots on Election Day in Kenosha, Wis., in this Nov. 3, 2020, file photo. Some Wisconsin Republicans have been working to discredit the bipartisan system they created to run elections in the state after President Joe Biden narrowly won the 2020 presidential race there. (AP/Wong Maye-E)

MADISON, Wis. — The Republican-hired investigator looking into Wisconsin’s 2020 election is no longer seeking to jail the mayors of Green Bay and Madison for allegedly not complying with a subpoena he issued last year.

A judge on Friday said he needed more facts before deciding whether to compel the mayors to testify. Waukesha County Circuit Judge Ralph Ramirez asked both sides to submit their arguments over the next 10 weeks and set a hearing for April 22.

Meanwhile, the attorney representing investigator Michael Gableman told the court in a letter Friday that his intent is to force the mayors to testify, not to jail them for noncompliance as he originally requested.

It’s the latest twist in a multi-faceted legal battle over the Republican-ordered investigation that involves multiple lawsuits in different counties before several judges. Most, if not all, of the cases are expected to make their way to the conservative-controlled Wisconsin Supreme Court.

They all revolve around the investigation ordered by Republican Assembly Speaker Robin Vos, under pressure from former President Donald Trump, into Trump’s 2020 loss. Vos hired Gableman to lead the probe with a budget of $676,000 in taxpayer dollars. It was supposed to be done in December but the legal battles will prolong it past the end of the legislative session in March when Republicans hoped to act on recommendations from Gableman.

Vos and Republicans say the investigation is trying to address issues raised by voters and others about election procedures and private grant money awarded to heavily Democratic cities in 2020, while looking for recommendations for law changes before the 2022 midterms and 2024 presidential election.

Democrats say it’s a sham designed to perpetrate the lie that Trump won in Wisconsin. He lost by just under 21,000 votes, an outcome that has withstood recounts, lawsuits and multiple reviews by both nonpartisan and conservative entities.

Jeffrey Mandell, the attorney for Green Bay Mayor Eric Genrich, argued Friday that there is no valid contract since there has not been an extension of the deal Vos originally signed with Gableman that expired on Dec. 31. Vos has said that he and Gableman have an oral contract to continue.

Mandell asked the judge to dismiss the filing by Gableman seeking to force the mayors to testify. But the judge said he first needed to gather facts from both sides in the case before ruling. He also put off deciding a motion filed by Genrich seeking sanctions against Gableman.

Gableman argues in his lawsuit that Genrich and Madison Mayor Satya Rhodes-Conway did not appear for depositions on Nov. 15, but the mayors argue Gableman had agreed to postpone those interviews. The mayors have said they turned over requested information to Gableman and the understanding was the interviews were not necessary.

In another related lawsuit, Democratic Attorney General Josh Kaul is trying to quash a subpoena from Gableman seeking testimony in private from the state’s chief elections official, Meagan Wolfe. A judge in that case earlier this month declined to immediately block the subpoenas issued to the Wolfe and commission, but also allowed for future legal challenges.

This week, the immigrant rights group Voces de la Frontera sought to join that lawsuit after Gableman subpoenaed it seeking a wide array of records related to the election. It argues that Gableman’s subpoena is overbroad and violates the group’s First Amendment rights to free speech and free assembly.

A hearing in that case is set for Feb. 2.