CIA: Most ailment cases not linked to U.S. foreign adversary by NOMAAN MERCHANT THE ASSOCIATED PRESS | January 21, 2022 at 4:20 a.m. 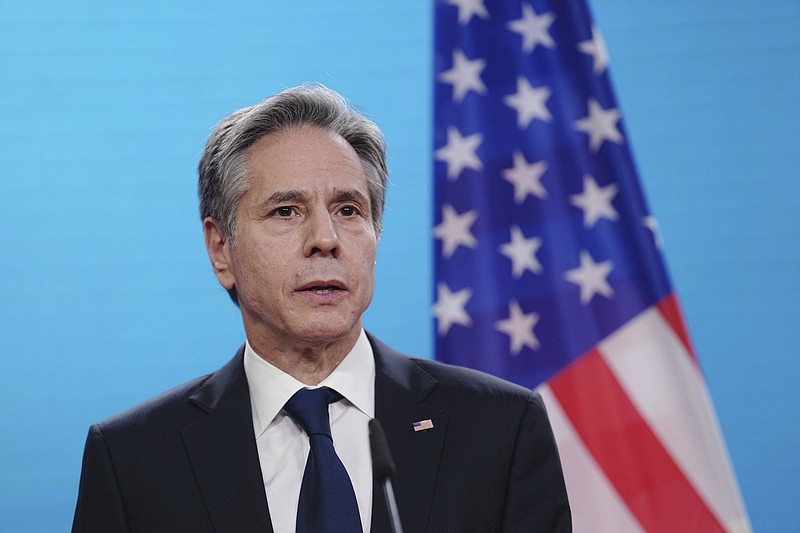 U.S. Secretary of State Antony Blinken speaks to the media Thursday after talks with the foreign ministers of Great Britain, Germany and France at the Federal Foreign Office in Berlin. Video at arkansasonline.com/121blinken/. (AP/Kay Nietfeld)

WASHINGTON -- The CIA concluded that it is unlikely Russia or another foreign adversary has used microwaves to attack American officials who attributed symptoms associated with brain injuries to "Havana syndrome."

The agency's findings, according to one official familiar with the matter who spoke on condition of anonymity to discuss the intelligence, drew immediate criticism from those who have reported cases and from advocates who accuse the government of long dismissing the array of ailments.

Investigators have studied hundreds of reported cases reported globally by U.S. intelligence officers, diplomats and military personnel and whether the injuries are caused by exposure to forms of directed energy. People affected have reported headaches, dizziness, nausea and other symptoms consistent with traumatic brain injuries.

Most cases under review by intelligence officers have been linked to other known medical conditions or to environmental factors, the official said, adding that in some cases, medical exams have revealed undiagnosed brain tumors or bacterial infections.

A few dozen cases are unresolved and remain under active investigation, the official said. The involvement of a foreign adversary has not been ruled out in those cases. NBC first reported the CIA's interim findings.

In a statement, CIA Director William Burns said the agency's commitment to its officers' health was "unwavering."

[Video not showing up above? Click here to watch » arkansasonline.com/121blinken/]

"While we have reached some significant interim findings, we are not done," Burns said. "We will continue the mission to investigate these incidents and provide access to world-class care for those who need it."

Mark Zaid, a Washington lawyer representing more than 15 officers who have reported cases, asserted that the CIA is having a "revolt within its workforce" among people who do not want to take overseas assignments for fear of being attacked.

"No reasonable person is asserting an exact conclusion exists that points to a specific culprit or weapon, but the issuance of this interim report was unnecessary and premature," Zaid said in a statement.

"Havana syndrome" cases date to a series of reported brain injuries in 2016 at the U.S. Embassy in Cuba.

Democrats and Republicans have pressed President Joe Biden's administration to determine who and what might be responsible and to improve treatment for victims.

Secretary of State Antony Blinken sent a letter to department employees assuring them investigations into the incidents would continue, as would efforts to improve care. At a news conference Thursday in Berlin, Blinken said that after meeting with people who had reported cases, "there is no doubt in my mind that they have had real experiences, real symptoms and real suffering."

"We are going to continue to do everything we can, with all the resources we can bring to bear, to understand, again, what happened, why, and who might be responsible," Blinken said. "And we are leaving no stone unturned."