Lopez in front in LPGA opener 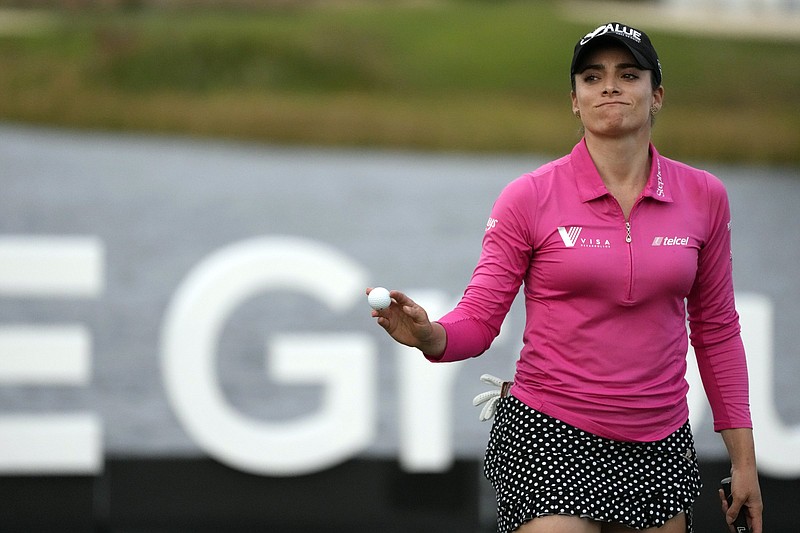 Gaby Lopez, of Mexico, reacts as she picks up her ball after finishing the 18th hole during the third round of the LPGA Tour Championship golf tournament, Saturday, Nov. 20, 2021, in Naples, Fla. (AP Photo/Rebecca Blackwell)

ORLANDO, Fla. — Gaby Lopez of Mexico began a new year and her seventh LPGA Tour season with a simple, and potentially prophetic, Instagram post: “Surprise me, 2022,” she wrote.

Lopez (Arkansas Razorbacks) jumped out to the lead Thursday in the Tournament of Champions, piecing together what she considered a near-perfect opening round to the new season. She made six birdies in a 5-under 67 at Lake Nona Golf and Country Club.

Lopez led by one shot over a foursome of players at 68 that included three major champions: world No. 1 Nelly Korda, who won her first major last year in the Women’s PGA Championship; Danielle Kang, the 2017 Women’s PGA champion; and U.S. Open champion Yuka Saso, who bogeyed her final hole. Also at 68 was Ryann O’Toole, a 34-year-old American who won for the first time last summer.

Lopez is a two-time winner on the LPGA, her last being a triumph at the 2020 Tournament of Champions across town, when she outlasted Nasa Hataoka in a seven-hole playoff at Tranquilo Golf Club. This week features a limited field of 29 LPGA tournament winners from the last three seasons competing next to 50 celebrities.

Looking back, Lopez said she enjoyed carrying the crown as “champion of champions.” Apparently, she enjoyed it enough to jump right back in the mix.

For Lopez, her solid play at Lake Nona was a continuation of a hot finish to 2021, when she recorded top-10 performances in three of her final four starts.

Starting on Lake Nona’s back nine, Lopez enjoyed her walk alongside former NFL standout Marcus Allen and former MLB slugger Joe Carter, taking full advantage by asking them how they approached their respective sports from a mental standpoint.

“I’m comfortable out there, being able to talk just different topics other than golf and what you did in the holidays,” she said. “But being able to talk about mentality and psychology out there, I mean with the biggest superstars in each event out there, it’s pretty amazing. I really take advantage of that.” Stacy Lewis (Razorbacks) is tied for ninth place at 2-under par.