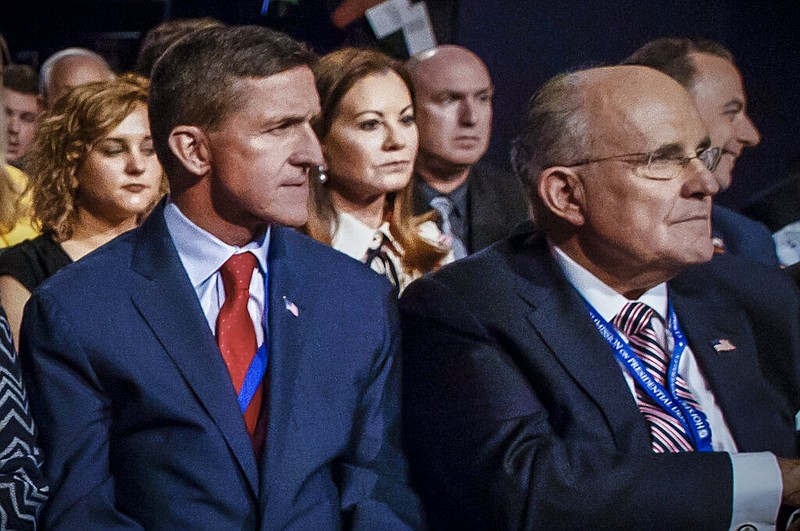 The university’s board of trustees voted Friday to revoke the degrees following internal deliberations that included a recommendation by University of Rhode Island President Marc Parlange.

The president said in a statement that Flynn and Giuliani “no longer represent” the values and standards they demonstrated when they first received the honors.

“As a civic institution, URI has the privilege and responsibility to sustain and preserve American democracy by inspiring and modeling good citizenship,” Parlange said. “Revoking these honorary degrees reinforces our values and allows us to lead with truth and integrity.”

Giuliani, who served as one of Trump’s top legal advisers, was awarded the Doctor of Laws Honoris Causa in 2003 based on his leadership in the wake of the Sept. 11, 2001, attacks, according to URI.

Flynn, who briefly served as Trump’s national security adviser before resigning after reports that he misled Trump officials about his contacts with Russia, was awarded an honorary doctorate of humane letters in 2014.

A spokesperson for Giuliani didn’t respond to an email seeking comment, but Flynn’s family released a lengthy and strongly worded statement ahead of Friday’s vote in which it dismissed it as “cowardly and corrupt.”

“With this flawed and crooked action, URI endorses the destructive and tyrannical cancel culture, bowing down to the woke mob and repressive forces, while revealing itself to lack the intellectual capacity, fortitude or integrity that is required of an American public university in the 21st century,” the family statement read in part.

The university board cited a number of findings by the university’s honorary degree committee, which is made up of faculty, staff and students, that led to its decision.

For Flynn, it noted, among other things, that he pleaded guilty to lying to the FBI. The Rhode Island native and 1981 graduate of the University of Rhode Island was pardoned by Trump in 2020.

For Giuliani, the university concluded that his words “encouraged domestic terrorist behavior” that led to the Jan. 6, 2021, assault on the U.S. Capitol.

It also noted he has been suspended from practicing law in the District of Columbia and New York for making “unfounded claims of rampant fraud during the 2020 presidential election.”