Two buses involved in crash on I-30 in Little Rock; no children on board 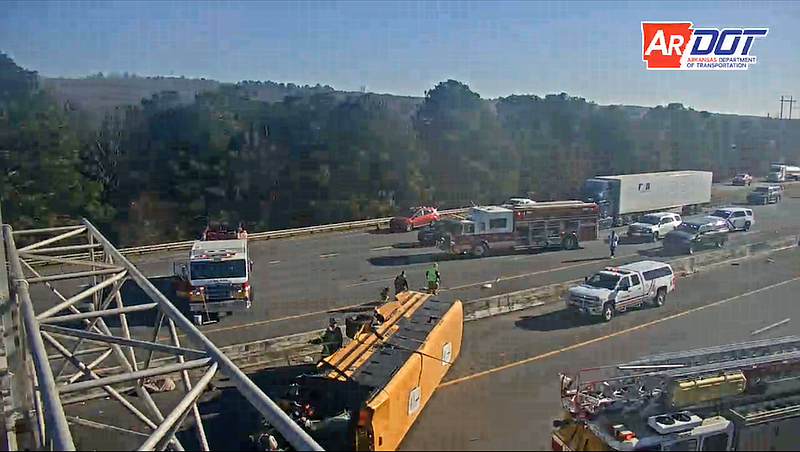 A school bus crash in Little Rock Friday afternoon is shown in an image from an Arkansas Department of Transportation traffic camera.

Two buses were involved in a wreck on Interstate 30 near Exit 135 on Friday afternoon. The accident injured two people and disrupted traffic in all westbound lanes and two eastbound lanes for several hours, authorities said.

One bus had been towing the other westbound when one of them lost control and crashed into the eastbound lane, striking a utility truck or van in that lane. It was not clear which bus had gone into the other lane, Sadler said.

The buses were not associated with either the Little Rock School District or the Pulaski County Special School District, Sadler said, and seemed to belong to a private transportation service.

No children were on the bus at the time of the wreck, Arkansas Department of Transportation spokesman Dave Parker said at 3 p.m. Friday.

At least one of the buses was marked "Durham School District," Sadler said. However, that bus could not have belonged to the Durham township in Washington County, because that community is not big enough to have its own school district.

A traffic camera showed the bus on its side on I-30 near Exit 135 shortly before 3 p.m. According to a report from the Arkansas Department of Transportation, the wreck closed all westbound lanes of traffic. Another crash caused two eastbound lanes, authorities said.

No children were on the bus at the time of the wreck, and it was not clear if the incident in the eastbound lane was related, Arkansas Department of Transportation spokesman Dave Parker said at 3 p.m. Friday.

See the idrivearkansas.com traffic map for the latest traffic information and check back for more updates.

⚠️Heavy backup on I-30 westbound caused by school bus accident. There were no children on board the bus. ⚠️