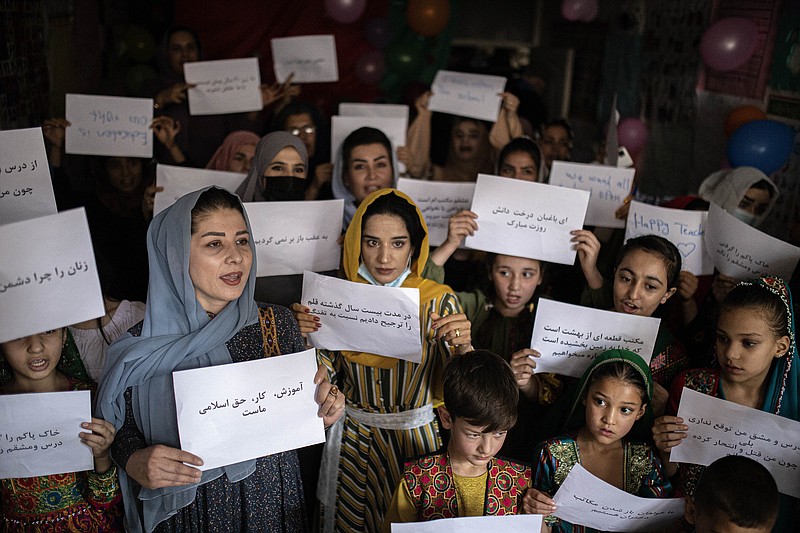 FILE - Women and teachers demonstrate inside a private school to demand their rights and equal education for women and girls, during a gathering for National Teachers Day, at a private school in Kabul, Afghanistan, Oct. 5, 2021. (AP Photo/Ahmad Halabisaz, File)

KABUL, Afghanistan -- The Taliban stormed an apartment in Kabul and arrested a women's rights activist and her three sisters, an eyewitness said Thursday. A Taliban statement appeared to blame the incident on a recent women's protest, saying insulting Afghan values will no longer be tolerated.

The activist, Tamana Zaryabi Paryani, was among about 25 women who took part in an anti-Taliban protest on Sunday against the hijab. A person from the neighborhood who witnessed the arrest said about 10 armed men, claiming to be from the Taliban intelligence department, carried out the raid on Wednesday night.

Associated Press footage from the scene on Thursday showed the apartment's front metal door dented and left slightly ajar. The occupants of a neighboring apartment ran inside their home, not wanting to talk to reporters. An outer security door of steel slats was shut and padlocked, making it impossible to enter Paryani's apartment.

The witness said the raid took place around 8 p.m. The witness spoke on condition of anonymity, fearing Taliban reprisal.

A spokesman for the Taliban intelligence, Khalid Hamraz, would neither confirm nor deny the arrest.

Since sweeping to power in mid-August, the Taliban have imposed widespread restrictions, many of them directed at women. Women have been banned from many jobs, outside the health and education field, their access to education has been restricted beyond sixth grade and they have been ordered to wear the hijab.

Hamraz tweeted that "insulting the religious and national values of the Afghan people is not tolerated anymore" -- a reference to Sunday's protest during which the protesters appeared to burn a white burqa, traditional head-to-toe female garment that only leaves a mesh opening for the eyes.

Organizers of the demonstration said Paryani attended the protest, which was dispersed after the Taliban fired tear gas into the crowd of women.

Paryani belongs to a rights group known as "Seekers of Justice," which organized several demonstrations in Kabul, including Sunday's. The group's members have not spoken publicly of her arrest but have been sharing the video of Paryani.

Hamraz accused rights activists of maligning Afghanistan's new Taliban rulers and their security forces to gain asylum in the West.

The New York-based Human Rights Watch criticized the crackdown, saying that since taking over Afghanistan five months ago, the Taliban "have rolled back the rights of women and girls, including blocking access to education and employment for many."