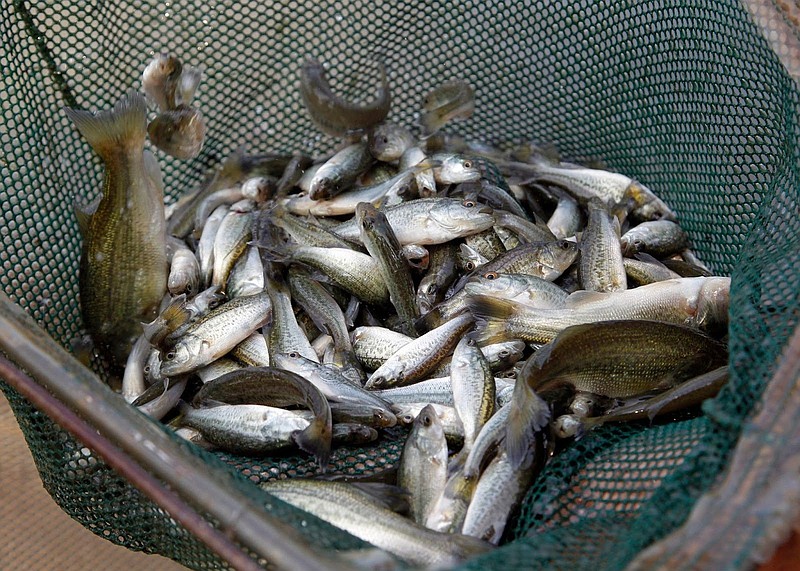 Anglers wetting a line in the waters of The Natural State have a lot of fishing, and fish, to look forward to. The Arkansas Game and Fish Commission, along with the U.S. Fish and Wildlife Service trout hatcheries and other partners, delivered more than 12.5 million fish to Arkansas waters during 2021.

"We're really proud of what the culture section at the AGFC has been able to accomplish in the last year," Tommy Laird, AGFC assistant chief of fisheries, said in the Arkansas Wildlife Weekly Newsletter. "With so much of our work requiring many hands at once, they had to pivot and adapt to social-distancing protocols as well as handle any labor shortages from quarantines to get the job done for Arkansas anglers."

As typical of recent years, the largest numbers of fish produced revolved around forage species, such as threadfin shad, fathead minnows, and golden shiners. Not only are these species added to lakes to spawn and boost productivity, but they also provide the backbone for a network of nursery ponds that feed directly into popular fishing destinations across the state.

Before nursery ponds are stocked with the sport fish they will raise, fisheries biologists fertilize the water and plant these forage species to offer food for the new residents. With the low predation rates and high forage availability, fingerlings in these nursery ponds grow quickly to give a boost to populations in the lakes where they are released.

Vic DiCenzo, AGFC Black Bass Program coordinator, explained that Florida bass stockings are about much more than boosting numbers of fish to catch.

"AGFC utilizes Florida bass stockings to try to enhance quality fishing by changing the genetics in certain locations," DiCenzo said. "Through research, we have identified the types of lakes and reservoirs where these stockings can be more successful."

Most reservoirs in Arkansas actually produce thousands of times the largemouth on their own than what can be stocked each year, but some supplemental stockings have shown beneficial in improving populations where reproductive success is limited. Some pools of the Arkansas River, for instance, have seen extreme siltation that has blocked off backwater habitat critical for spawning. In these extreme cases, stocking can play a role in bolstering bass populations.

Natural State trout anglers have a lot to be happy for from 2021 as well. Thanks to the USFWS hatcheries at Greers Ferry, Norfork and Mammoth Spring and an additional purchase of trout using Federal Emergency Management Agency funding for flood damage to the AGFC's Jim Hinkle Spring River Hatchery, the AGFC and its partners were able to deliver 1.36 million trout to Arkansas' tailwater fisheries and Family and Community Fishing Locations around the state when conditions were favorable. The vast majority of those (1.31 million) were rainbow trout, while the rest were made up of brown trout, brook trout and tiger trout, a cross between the two.

Nearly 613,000 black crappie were stocked in 2021, with most going toward a study to see if stocking larger size crappie will improve survival. Almost every previous study of crappie stocking across the U.S. has shown very little success at increasing numbers. AGFC is able to grow larger crappie than many states, and hatchery staff want to see if it could make a difference.

Striper anglers will note more than 577,000 of these fish stocked in Beaver, Ouachita and Norfork lakes this year, thanks to the AGFC's collaboration with many partners, including Keo Fish Farms in England, which is owned by former commissioner Mike Freeze, and the North Carolina Wildlife Resources Commission's Inland Fisheries Division. Both of these organizations donated striped bass fingerlings to Arkansas to help recover from a shortfall of fish produced at the hatchery.

"In addition to covid-19 protocols hindering our broodstock collection efforts, we needed to add some different striped bass genetics to these lakes to keep the populations healthy and prevent issues caused from line breeding," Laird said. "We're always thankful to have former commissioner Freeze's help, and the effort to collect the stripers from Carolina was a point of pride in the fish culture section this year."

Randy Zellers is assistant chief of communications at the Arkansas Game and Fish Commission.