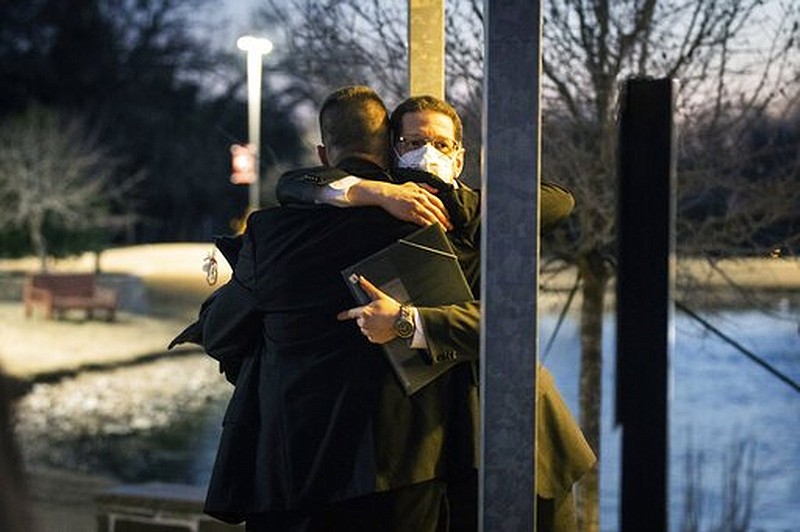 Following the deadly 2018 attack on the Tree of Life Congregation in Pittsburgh, many Jewish houses of worship increased their security measures.

"He served as president of our Southwest Association of Reform Rabbis, which includes Arkansas, and he's a wonderful colleague," Block said.

As the armed standoff unfolded Jan. 15, "I was praying, and I was following the news, and I was imagining how Rabbi Cytron-Walker was managing the situation," he said.

"Other than the part where he throws a chair at the end and saves everybody's life, what I imagined was pretty much what he did," Block said.

The threat of violence, he said, is "an unfortunate reality of Jewish life in America today."

"We continually review our security procedures, and we will certainly be reviewing them again in the aftermath of this incident," he said.

"We are in close connection with law enforcement, with the FBI in particular," Block said.

"Especially since 2017, there's been a sharp increase in anti-Semitism and violent anti-Semitic incidents in the United States, so we've had to be increasingly aware of security and increasingly spend money on security," he said.

For $135, a Congregation B'nai Israel donor can be the weekly "security sponsor," enabling the synagogue to have an off-duty officer on hand at Shabbat services.

At Temple Shalom of Northwest Arkansas in Fayetteville, security measures were heightened following the murder of 11 worshippers in Pittsburgh.

A GoFundMe drive raised $1,648 to help pay for the improvements.

Jacob Adler, the temple's rabbi emeritus, said he is grateful that the hostages were able to get out safely.

"It's a tragedy of the world that there is so much hatred -- towards Jews in particular, but to all kinds of people, in general," he said.

The total Jewish population in the United States, according to the 2019 American Jewish Year Book, is 6.97 million -- roughly one in every 47 Americans.

Arkansas has one of the lowest Jewish populations in the United States "so the feelings of fear are certainly palpable," said Toby Klein, Temple Shalom's co-president.

Rabbi Pinchus Ciment, director of Lubavitch of Arkansas in Little Rock, said leadership must have security measures in place and congregants should receive "general training awareness" but not "constant reminders" of the risks.

"We live in very challenging times. People can come out of the woodwork and just do strange things, but that does not mean that we have to live with fear," he said.

"Temper the worries, temper the anxieties, because this is a good world; it's a good life to live," he said.

"The message is one of positivity, and of things that can be celebrated today. That's the consuming message people should be hearing," he said.

Rabbi Sam Radwine of Congregation Etz Chaim in Bentonville predicted the incident would unify his community.

"Jews are a people of hope and we're proactive," he said. "We hope and we want to be proactive [so] that we can find a way for this not to happen again," he said.