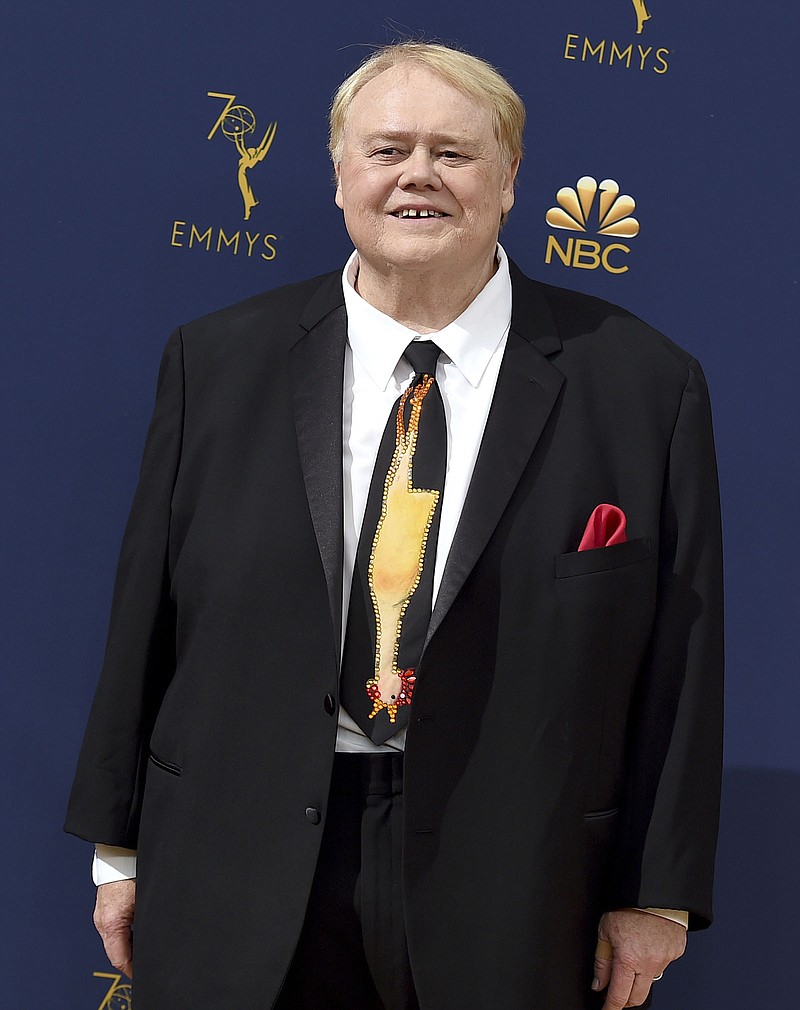 Louie Anderson arrives at the 70th Primetime Emmy Awards on Sept. 17, 2018, in Los Angeles. Anderson, whose four-decade career as a comedian and actor included his unlikely and Emmy-winning performance as mom to twin adult sons in the TV series “Baskets,” has died at age 68. (Photo by Jordan Strauss/Invision/AP, File)

LOS ANGELES -- Louie Anderson, whose four-decade career as a comedian and actor included his unlikely, Emmy-winning performance as mom to twin adult sons in the TV series "Baskets," died Friday. He was 68.

Anderson died at a hospital in Las Vegas of complications from cancer -- a type of non-Hodgkin lymphoma -- said Glenn Schwartz, his longtime publicist.

"'Baskets' was such a phenomenal 'second act' for Louie Anderson. I wish he'd gotten a third," actor and comedian Michael McKean said on Twitter. Comedian George Wallace wrote: "You'll be missed, Louie. What an awesome friend. One in a million." Actor-comedian Gilbert Gottfried posted a photo of himself, Anderson and comic Bob Saget, who died Jan. 9, with the caption: "Both good friends that will be missed."

The portly, round-faced Anderson used his girth and a checkered childhood in St. Paul, Minn., as fodder for his early stand-up routines.

He had a lifelong battle with weight, but said in 1987 that he'd put a stop to using his size as stage material. "I've always been big," he said. "But I don't do fat jokes anymore."

In later years, his life as one of 11 children in a family headed by a troubled father and devoted mother was a deeper source of reflection and inspiration, both in his screen work and in best-selling books.

[Video not showing up above? Click here to watch » arkansasonline.com/122louie/]

His latest book, 2018's "Hey Mom," was a tribute in letters to the lessons he learned from her and how-to tips on facing life's challenges. He also gave her a shout-out for the "Baskets" role.

"I just started writing with one letter, saying, 'Hey Mom, I'm playing you on TV. I hope you see it. I hope you're a part of it," Anderson said that year.

He won the best supporting actor Emmy in 2016 for his portrayal of Christine Baskets, mother to twins played by Zach Galifianakis, in FX's "Baskets." Anderson, who received three consecutive Emmy nods for the role, played it with restraint and with specific touches he credits to his mom.

"Nuance is what I go for, tiny rather than bigger things. Mom did things with her eyes or her grimace or her disappointed lips -- or her passive-aggressiveness," he said in 2015, laughing. "Rolling eyes were big in our family."

Anderson's big break came in 1984 when Johnny Carson brought him on "The Tonight Show."

He was a familiar face elsewhere on TV, including as host of a "Family Feud" game-show revival from 1999 to 2002, and in comedy specials and frequent late-night talk-show appearances.

Anderson voiced an animated version of himself as a kid in "Life With Louie." He created the Humanitas Prize-winning cartoon series, which first aired in prime time in late 1994 before moving to Saturday morning for its 1995-98 run. Anderson won two Daytime Emmy Awards for the role.

He made guest appearances in several TV series, including "Scrubs" and "Touched by an Angel," and was on the big screen in 1988's "Coming to America" and in last year's sequel to the Eddie Murphy comedy.

Fellow performers recalled his gentleness. "You were as gracious and kind as you were funny. Rest well!! Keep 'em laughing in Heaven," Viola Davis said on Twitter. Rita Rudner said in a statement: "He was a kind, generous, talented man who leaves behind a legacy of laughter, love and french fries."

Information for this article was contributed by Katie Vasquez of The Associated Press.