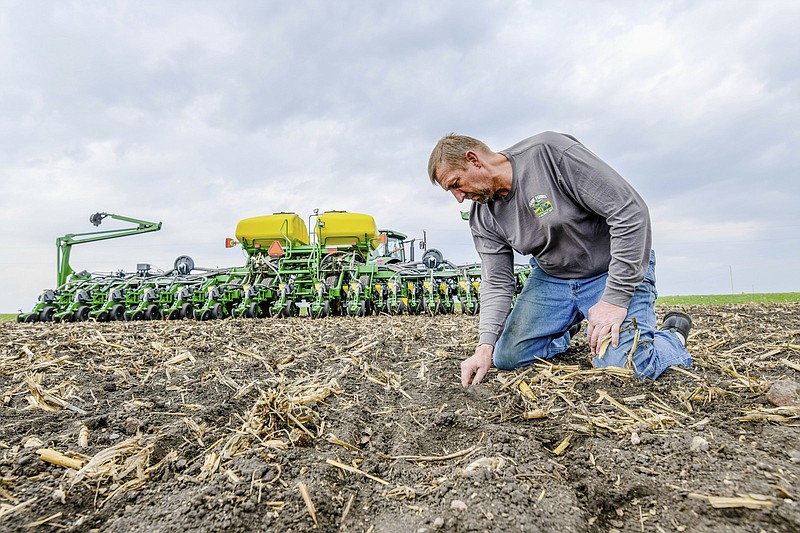 Jeff Frank looks at the soil in 2018 on his farm near Auburn, Iowa. Median home prices, for previously-owned homes, rose by 15.8% in the U.S. last year, but farmland values went up about double that rate in places like Iowa. (AP File/Iowa Soybean Association/Joseph L. Murphy)

DES MOINES, Iowa -- Fourth-generation corn and soybean farmer Jeff Frank doesn't feel rich, but simply based on the skyrocketing value of his land in northwest Iowa, it's an apt way to describe him, even if he laughs at the idea.

He lives in the same nearly century-old house, grows vegetables in the family garden and shops at the same grocery store about 15 miles down the road.

"We live the same way we have all of our lives," he said.

Still, even if Frank's life hasn't changed, the several hundred acres he owns about 80 miles northwest of Des Moines have suddenly made him worth millions of dollars.

Countless farmers like Frank are actually experiencing a real estate boom that makes residential prices pale in comparison. While median existing-home prices rose by 15.8% in the U.S. last year, farmland values went up about double that rate in places like Iowa.

The rising values, especially in the Midwest, are attributed to high prices being paid for the key commodity crops of corn and soybeans, plentiful harvests in recent years coupled with low interest rates and optimism that the good times will continue. But they're a mixed blessing.

They're enriching farmers who already have a lot of land, but making it much harder for small operators or younger farmers starting out to get land unless they happen to inherit it.

Most purchases are by operations that see the value of larger scale, seizing the chance to buy nearby land.

"If you miss this opportunity, you may not get another chance," Zhang said, describing the current mood.

Historically, farmland values rise and fall, but in the past couple of decades they have mostly risen, and in the past year they have risen a lot -- 33% in Frank's part of the state and 29% throughout Iowa, one of the nation's top agricultural states. Agricultural prices also have soared elsewhere in the Midwest and have climbed in most other parts of the country, too.

Nationally, farmland was up an average of 7% but that doesn't include the last half of 2021, when prices really took off in many areas.

Farmland prices have even climbed in California despite concerns about persistent drought. In 2021, the average price of $10,900 an acre was up 9% from 2020.

Dan Sumner, an agricultural economist at the University of California, Davis, credits some of the rising value to farmers switching to higher-value crops, such as replacing alfalfa with nut trees.

Overall, though, Sumner said farmers are feeling good about their future.

"It reflects confidence in the economics of agriculture," he said.

The upswing follows tumultuous years of trade wars, market breakdowns because of the coronavirus pandemic and drought in much of the West.

For individual farmers, the biggest benefit of rising values is that they can borrow money at better rates for annual needs like seed and fertilizer and longer-term investments like tractors and even more land.

The high prices have prompted plenty of people to buy and sell land, leading to a record of $765 million in agricultural land sales last year overseen by Farmers National Co., one of the nation's largest landowner services companies.

"It's been very busy," Dickhut said. "It's certainly easy to sell."

But Holly Rippon-Butler, who runs a dairy with her parents in upstate New York, called the farmland price increases "just nuts."

"The hard reality is, buying land is almost impossible unless you have some pre-existing source of generational family wealth," said Rippon-Butler, who works with the National Young Farmers Coalition, an organization that among other priorities advocates for policy changes and public funding that would enable more people to have access to agricultural land.

Given high land prices, Rippon-Butler said beginning farmers she encounters typically work as little as a quarter-acre of land and see 20 acres as a relatively large operation. Many farmers also rent land, and as values rise, so do rental rates.

Frank, the farmer in northwest Iowa, said that even though he's technically wealthier now, it hard for him to expand his holdings as he prepares to pass along the property to the next generation.

"I have a son who farms with me and of course he'd like to expand but buying farmland right now is a big undertaking," he said. "Even for a small farm you're talking about millions of dollars."