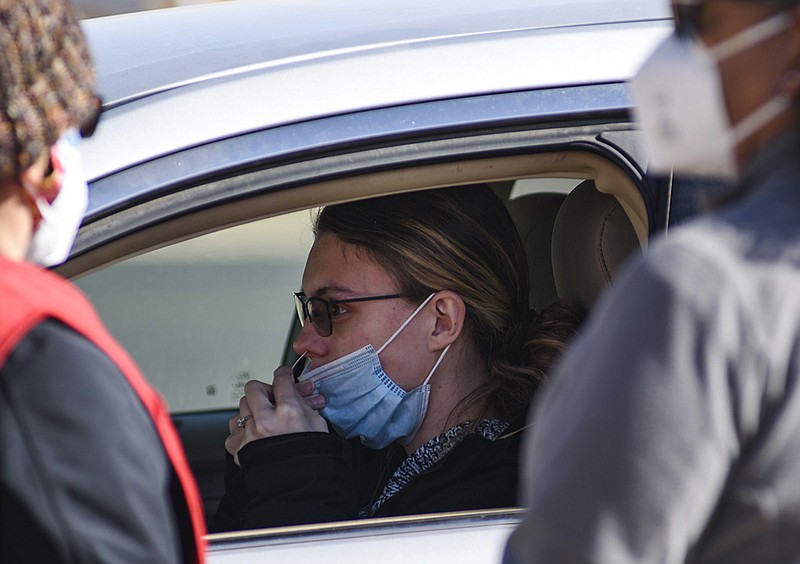 WASHINGTON -- The coronavirus surge that has overwhelmed hospitals, strained resources and sickened tens of thousands of people appears to be waning, Biden administration officials said Friday.

"In some parts of the country, we are seeing the number of daily cases caused by the omicron variant beginning to decline," said Centers for Disease Control and Prevention Director Dr. Rochelle Walensky during a White House briefing. "But as we have seen during other phases of this pandemic, the surge in cases started at different times in different regions, and may continue to see high case counts in some areas of the country in the days and weeks ahead."

The seven-day daily average of cases has decreased 5% compared with the previous week, Walensky said.

"We are still recommending public indoor masking," Walensky said, after emphasizing the need for all eligible Americans to get vaccinated and get booster shots. U.S. health officials say such measures are the best ways to reduce the risk of serious illness from a virus that has caused more than 25,000 U.S. deaths since Jan. 1, according to government data -- and more than 864,000 U.S. deaths since the pandemic began two years ago, according to Johns Hopkins University.

Administration officials disclosed Friday that free rapid coronavirus tests ordered from covidtests.gov have started shipping. The government website launched this week, with administration officials promising to send tens of millions of tests to Americans who request them. Jeff Zients, the White House covid-19 response coordinator, said millions of orders have been processed, though he did not disclose how many have shipped. People are eligible to receive up to four tests.

[Video not showing up above? Click here to watch » arkansasonline.com/122covidfall/]

Free masks are also on their way to pharmacies and community health centers as part of a program that aims to put 400 million N95 respirators on the faces of Americans, Zients said. The CDC's updated guidance on masks acknowledges that high-quality N95 and KN95 masks offer far more protection than cloth face coverings.

The free N95 masks will be limited to three per person.

Meanwhile, three studies released Friday offered more evidence that covid-19 vaccines are standing up to the omicron variant, at least among people who received booster shots.

They are the first large U.S. studies to look at vaccine protection against omicron, health officials said.

The papers echo previous research -- including studies in Germany, South Africa and the U.K. -- indicating available vaccines are less effective against omicron than earlier versions of the coronavirus, but also that booster doses rev up virus-fighting antibodies to increase the chance of avoiding symptomatic infection.

The first study looked at hospitalizations and emergency room and urgent care center visits in 10 states, from August to this month.

It found vaccine effectiveness was best after three doses of the Pfizer or Moderna vaccines in preventing emergency-room and urgent-care visits. Protection dropped from 94% during the delta wave to 82% during the omicron wave. Protection from just two doses was lower, especially if six months had passed since the second dose.

Officials have stressed the goal of preventing not just infection but severe disease. On that count, some good news: A third dose was at least 90% effective at preventing hospitalizations, both during the delta and omicron periods, the study found.

[Video not showing up above? Click here to watch » arkansasonline.com/122omicron/]

The second study focused on covid-19 case and death rates in 25 states from the beginning of April through Christmas. People who were boosted had the highest protection against infection, both during the time delta was dominant and also when omicron was taking over.

Those two articles were published online by the CDC.

The Journal of the American Medical Association published the third study, also led by CDC researchers. It looked at people who tested positive from Dec. 10 to Jan. 1 at more than 4,600 testing sites across the U.S.

Three shots of the Pfizer and Moderna vaccines were about 67% effective against omicron-related symptomatic disease compared with unvaccinated people. Two doses, however, offered no significant protection against omicron when measured several months after completion of the original series, the researchers found.

"It really shows the importance of getting a booster dose," said the CDC's Emma Accorsi, one of the study's authors.

Americans should get boosters if at least five months has passed since they completed their Pfizer or Moderna series, but millions who are eligible have not gotten them.

"If you are eligible for a booster and you haven't gotten it, you are not up to date and you need to get your booster," Walensky said at a White House briefing Friday.

In another aspect of the pandemic, Roger Strukhoff was being treated for intestinal bleeding at a hospital outside Chicago this month when he suffered a mild heart attack. Normally, the 67-year-old would have been sent to the intensive care unit. But Strukhoff said it was overrun with covid patients, and the staff instead had to wheel a heart monitor into his room and quickly administer nitroglycerin and morphine.

"A doctor I know pretty well said, 'Roger, we're going to have to improvise right here,'" said Strukhoff, who lives in DeKalb, Ill.

The omicron surge this winter has not only swamped U.S. hospitals with record numbers of covid patients, it has also caused frightening moments and major headaches for people trying to get treatment for other ailments.

Less-urgent procedures, such as cochlear implant surgeries and steroid injections for rheumatoid arthritis, have been put on hold around the country. And people with all sorts of medical complaints have had to wait in emergency rooms for hours longer than usual.

Mat Gleason said he wheeled his 92-year-old father, Eugene Gleason, into a Los Angeles-area emergency room last week for a transfusion to treat a blood disorder. It should have taken seven to 10 hours, Gleason said, but his dad was there for 48 hours.

He said his father called him after 10 hours, asking for a blanket.

"He told me later, 'I just assumed they forgot about me," said Gleason. "And yet he wasn't the only person in that room. There were dozens of people" But Gleason added: "I'm not begrudging the hospital at all. They did a great job."

An average of almost 144,000 people were in U.S. hospitals with covid-19 as of Tuesday, the highest level on record, according to the CDC. Hospitals in a few states such as New York and Connecticut that experienced early omicron surges are starting to see an easing of the patient load, but many other places are overwhelmed.

Hospitals say the covid-19 patients aren't as sick as those during the last surge. And many of them are being admitted for reasons other than covid and only incidentally tested positive.

Rick Pollack, CEO and president of the American Hospital Association, said the surge has had a widespread effect on the availability of care for people who have noncovid health problems. He said a number of factors are at play: More people are in the hospital, and a high number of health care workers are out with covid-19, worsening staffing shortages that existed well before the pandemic.

Many people are also unable or unwilling to seek care for symptoms that do not seem like emergencies, he said. Pollack said that has led to delays in diagnosing conditions such as diabetes or high blood pressure that get worse the longer they go untreated.

Dr. Claudia Fegan, chief medical officer for Cook County Health in Chicago, said some people, particularly older patients, have been avoiding checkups and other routine care during the pandemic out of fear of the virus.

And as a result, "the patients we're seeing now are much sicker," she said, citing cases of advanced heart failure and cancer that might have been diagnosed earlier.

Mike Bawden, a 59-year-old marketing consultant with a history of blood clots in his lungs, said he couldn't get an appointment to see his doctor in Davenport, Iowa, because his coughing symptoms were too similar to covid-19. The doctor's office was concerned about the virus spreading to others.

After nearly two weeks, Bawden went to a walk-in clinic, which sent him to the emergency room at Genesis Medical Center-East in Davenport. He said he waited almost six hours in an overflowing ER before he was seen. A scan showed clots in his lungs, as he suspected, and he was prescribed blood thinners.

If not for the surge, Bawden said, he would have gotten a scan much earlier at a doctor's office.

"It's always so easy to Monday morning quarterback the ER, but everyone was really nice -- even the other patients," Bawden said. "I think it's important for folks to realize that nobody's the villain."

Craig Cooper, a Genesis spokesman, declined to comment on an individual case. But he said in an email: "We are not exempt from the challenges medical centers across the United States are experiencing because of significant impact from COVID. We urge individuals to get vaccinated."

Strukhoff, who is a researcher for tech startups, said he arrived at Northwestern Medicine Kishwaukee Hospital in DeKalb for what he suspected was internal bleeding.

He was diagnosed and given a bed in the emergency room. He waited for six hours, feeling dizzy, before he was wheeled to his own room through hallways where people lay on stretchers.

"I was in no distress at that point," Strukhoff said. "I was worried about clogging up the works in the emergency room and taking up a spot for other people."

Christopher King, a spokesman for Northwestern Medicine, declined to comment on Strukhoff's care because of privacy laws. But he confirmed that wait times were higher than normal throughout the hospital system, as they are across the country.

Strukhoff said that once he got his own room, a colonoscopy revealed the bleeding. Doctors treated it by cauterizing a vein. He then suffered the heart attack while he was recovering. He said it took five hours for him to get into the ICU.

"It's not something they were set up to do, but they did it," Strukhoff said of the doctors and nurses who rose to the challenge. "These people are heroes."

Some Arkansas hospitals have been careful in their scheduling of elective procedures but have not canceled them altogether.

"If someone needs a surgery that isn't something that has to be done right away, then we're spacing them out over a week or two and trying not to just schedule them right away," University of Arkansas for Medical Sciences spokeswoman Leslie Taylor said.

Neither Mercy's Rogers facility nor the one in Fort Smith plans to cancel any elective surgeries, Kuester and Fort Smith hospital spokeswoman Mardi Taylor said Friday.

Baptist Health has not altered its scheduling or performance of elective procedures, communications director Cara Wade said in an email.

"Though hospital beds and staffing are extremely limited, we have fortunately been able to keep surgeries going as scheduled for all of our patients," she said. "Limiting nonurgent services remains an option to create hospital capacity in the future if needed."

St. Bernards Medical Center in Jonesboro "recently expanded capacity to accommodate an influx of patients," media relations manager Mitchell Nail said in an email, and the hospital will continue to perform elective procedures "without disruption."

Information for this article was contributed by Anumita Kaur of the Los Angeles Times (TNS); by Mike Stobbe, Ben Finley and Kate Brumback of The Associated Press; and by Tess Vrbin of the Arkansas Democrat-Gazette.