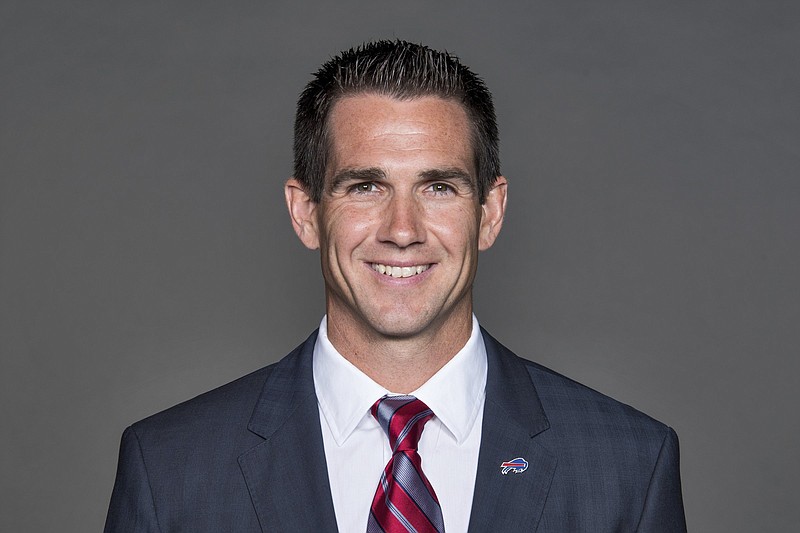 EAST RUTHERFORD, N.J. -- Joe Schoen was at the top of the New York Giants' list of candidates when they started their search for a new general manager, and the Buffalo Bills assistant GM never left that spot.

The Giants hired the 42-year-old Schoen as their general manager Friday. It ended a quick but extensive search in which they interviewed nine candidates in the first round and gave three a second interview in finding a replacement for Dave Gettleman.

"Throughout our search, Joe impressed us with his ability to communicate a progressive and comprehensive vision for our team," Giants co-owner John Mara said. "His philosophy and collaborative approach to building a roster and coaching staff align with what we were looking for in a general manager."

"Joe is the kind of exceptional leader we sought to oversee our football operations," fellow co-owner Steve Tisch said. "We will do whatever it takes to support Joe's vision and strategic plan for success. We are excited to begin this next chapter with Joe as our general manager."

Schoen faces a major rebuilding process. The Giants have made the playoffs once since winning the Super Bowl in February 2012. They have had five consecutive double-digit losing seasons, including a 4-13 record this past season.

Schoen (pronounced Shane) spent the last five seasons as GM Brandon Beane's top assistant. They have rebuilt the Bills, making the playoffs four of five seasons, while winning the last two AFC East titles. Prior to that, Buffalo had a 17-year playoff drought.

His first job will be to find a coach to replace Joe Judge, who was fired last week after posting a 10-23 in two seasons. Interviews probably will start next week.

The Panthers are hiring former New York Giants Coach Ben McAdoo to be their new offensive coordinator, according to a person familiar with the situation.

The person spoke to The Associated Press on condition of anonymity Friday because the team is still finalizing the details of the contract.

McAdoo served as a consultant with the Dallas Cowboys this season.

He was Giants head coach in 2016-17, finishing 11-5 in his first season before losing to the Green Bay Packers in the first round of the NFC playoffs. However, he was fired late in his second season after the Giants started 2-10 and he benched quarterback Eli Manning.

The Panthers focused on hiring a coordinator who had some NFL play-calling experience. That's a different approach than two years ago when Rhule hired Joe Brady from LSU to be the team's offensive coordinator. Brady was fired midway through his second season in Carolina with the offensive struggling to find an identity.

The 44-year-old McAdoo was Giants offensive coordinator under Tom Coughlin from 2014-15 before being promoted to head coach.

The Panthers want to have a physical presence to their offense, but the focus was primarily on finding a candidate they thought could improve the passing game. They think McAdoo can help with that given his background with the Giants and Green Bay Packers. McAdoo inherited a Giants passing game that ranked 28th in 2013 and elevated the team to seventh in 2014 and eighth in 2015.

"After several productive conversations, Don and I have agreed to move forward in separate directions," Harbaugh said in a statement. "We have had a great run on defense, and I am very proud of what has been accomplished and the work he has done. Don has been a major contributor to the success of our defense since 2012, and especially since he became defensive coordinator four years ago."

Martindale's departure comes after only the second losing season in Harbaugh's 14 years as Baltimore's coach. The injury-riddled Ravens lost their final six games following an 8-3 start and missed the playoffs.

The defense was hit hard by injuries in the secondary, and although Baltimore was competitive during most of its season-ending skid, a 41-21 loss to division rival Cincinnati was particularly damaging. The Ravens allowed Joe Burrow to throw for 525 yards in that game.

The 58-year-old Martindale departs after a decade with the Ravens. He began his tenure coaching inside linebackers in 2012, the season Baltimore won the Super Bowl. He became defensive coordinator in 2018.

GREEN BAY, Wis. -- The Green Bay Packers have boosted their pass rush for the postseason by activating outside linebackers Za'Darius Smith and Whitney Mercilus from injured reserve.

These moves clear the way for Smith to play his first game in over four months and Mercilus to suit up for the first time since mid-November when the top-seeded Packers host the San Francisco 49ers in an NFC divisional playoff game Saturday night.

Green Bay made room for them on the roster by releasing defensive lineman Jack Heflin and cornerback Isaac Yiadom.

Smith, 29, had a combined 26 sacks for the Packers from 2019-20 but hasn't played since a 38-3 season-opening loss to the New Orleans Saints due to a back injury that also sidelined him for virtually the entire preseason. Smith reached the Pro Bowl in 2019 and 2020. He also was a second-team All-Pro selection in 2020.

Mercilus, 31, joined the Packers on Oct. 21 after the Houston Texans released him. He had one sack -- the 58th of his career -- in four games with Green Bay before a Nov. 14 biceps injury sidelined him for the rest of the season.

KANSAS CITY, Mo. -- The Kansas City Chiefs could have running back Clyde Edwards-Helaire available for the first time in nearly a month when they play the Buffalo Bills on Sunday night for a spot in their fourth consecutive AFC Championship Game.

Edwards-Helaire practiced all week for the first time since hurting his collarbone in the second half against Pittsburgh on Dec. 26, though Chiefs Coach Andy Reid stopped short of declaring him ready to go following Friday's workout.

Last week, Reid was optimistic Edwards-Helaire would play in the wild-card round but he wound up being inactive.

"I felt comfortable with him practicing today and he did practice full speed and all of that," Reid said. "But listen, I'm still recovering from telling you guys he was going to play last week. So I'm not saying anything until the fish is in the boat."

Edwards-Helaire, who also dealt with a knee injury earlier this season, has run for 517 yards and four touchdowns while appearing in parts of just 10 games. His propensity for getting hurt has forced the Chiefs to rely on a backfield by committee this season with Darrel Williams, Jerick McKinnon and Derrick Gore also getting plenty of work.

Williams also is expected to play against Buffalo after he was limited in last week's 42-21 romp over the Steelers by a toe injury. 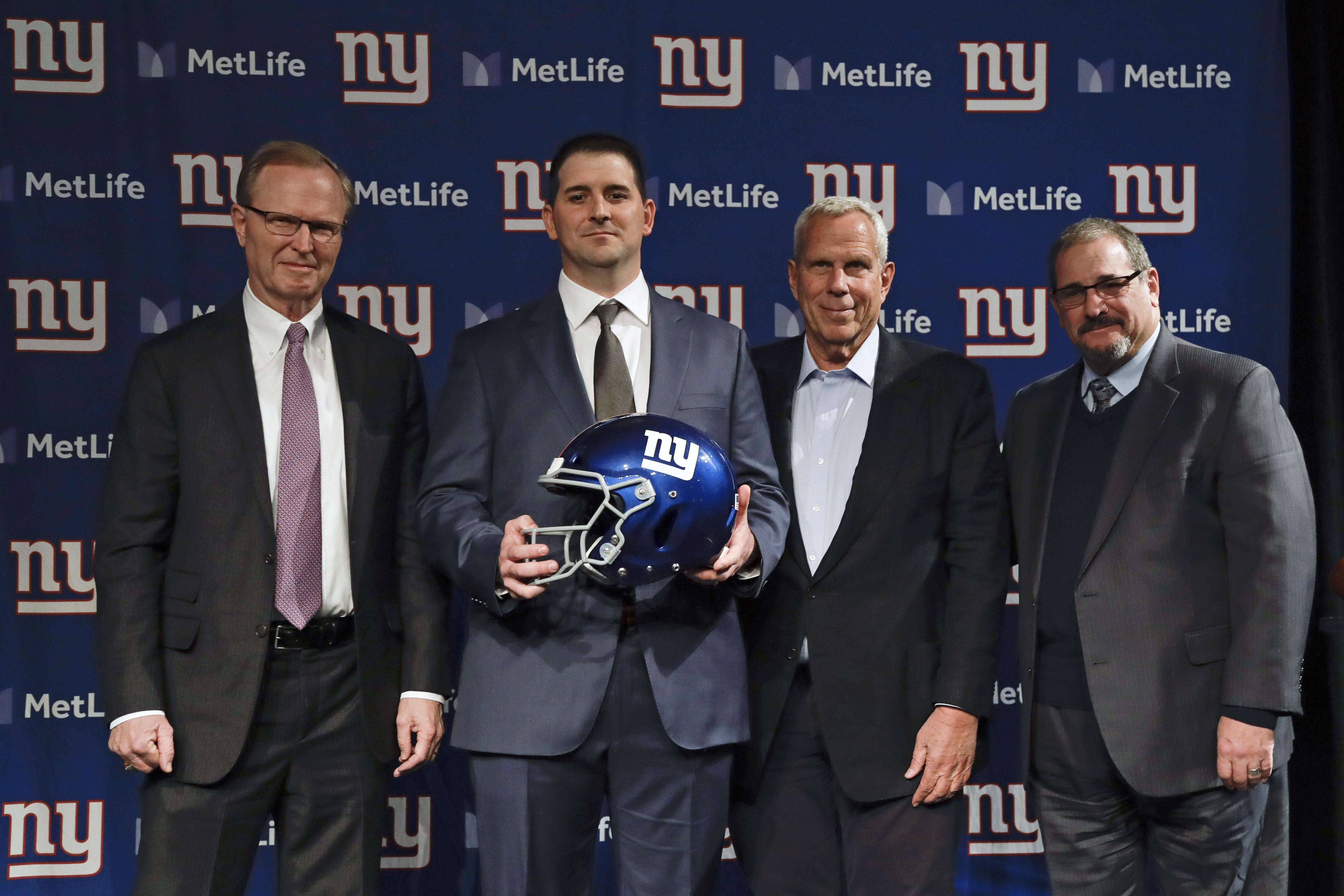 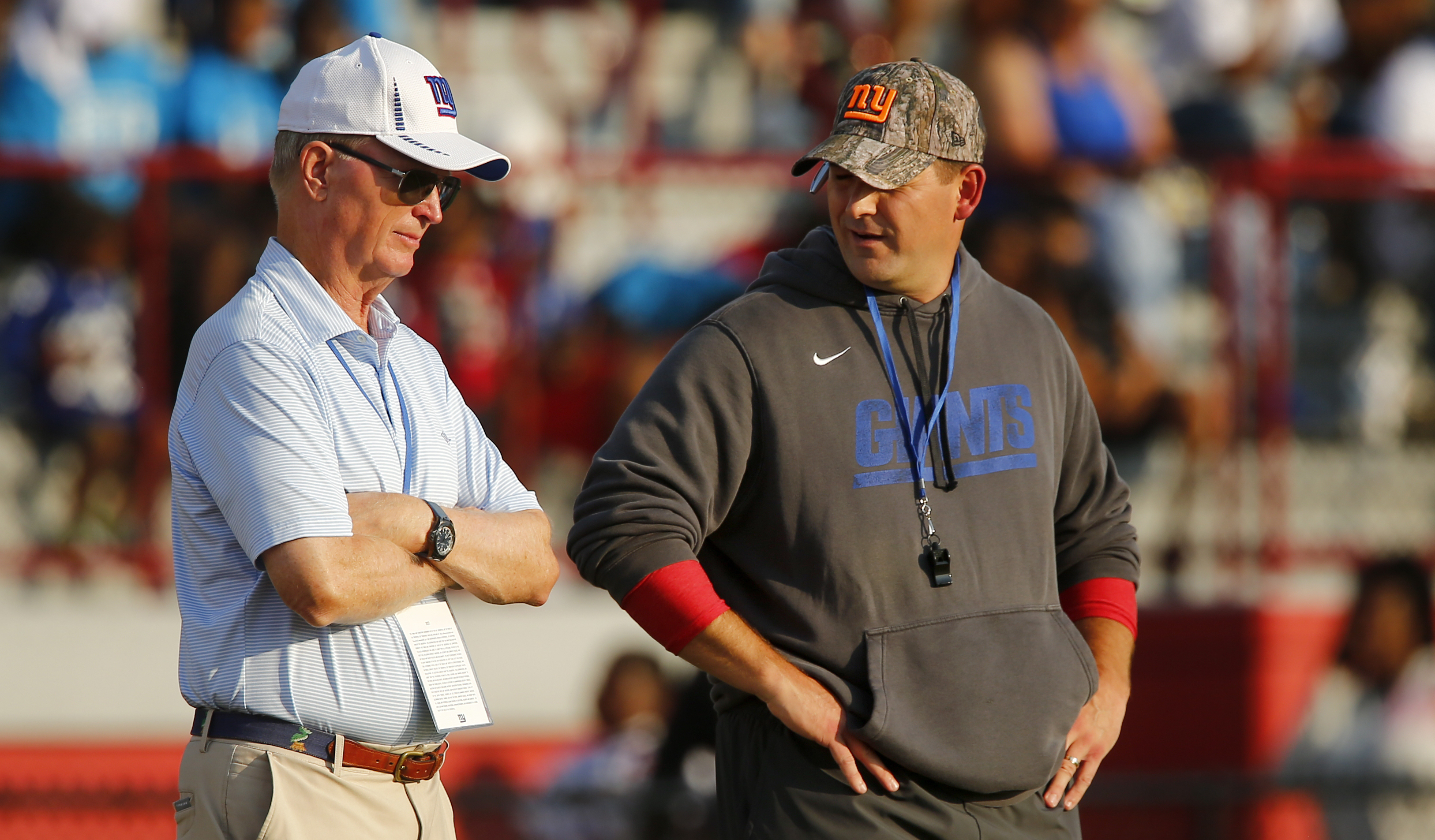 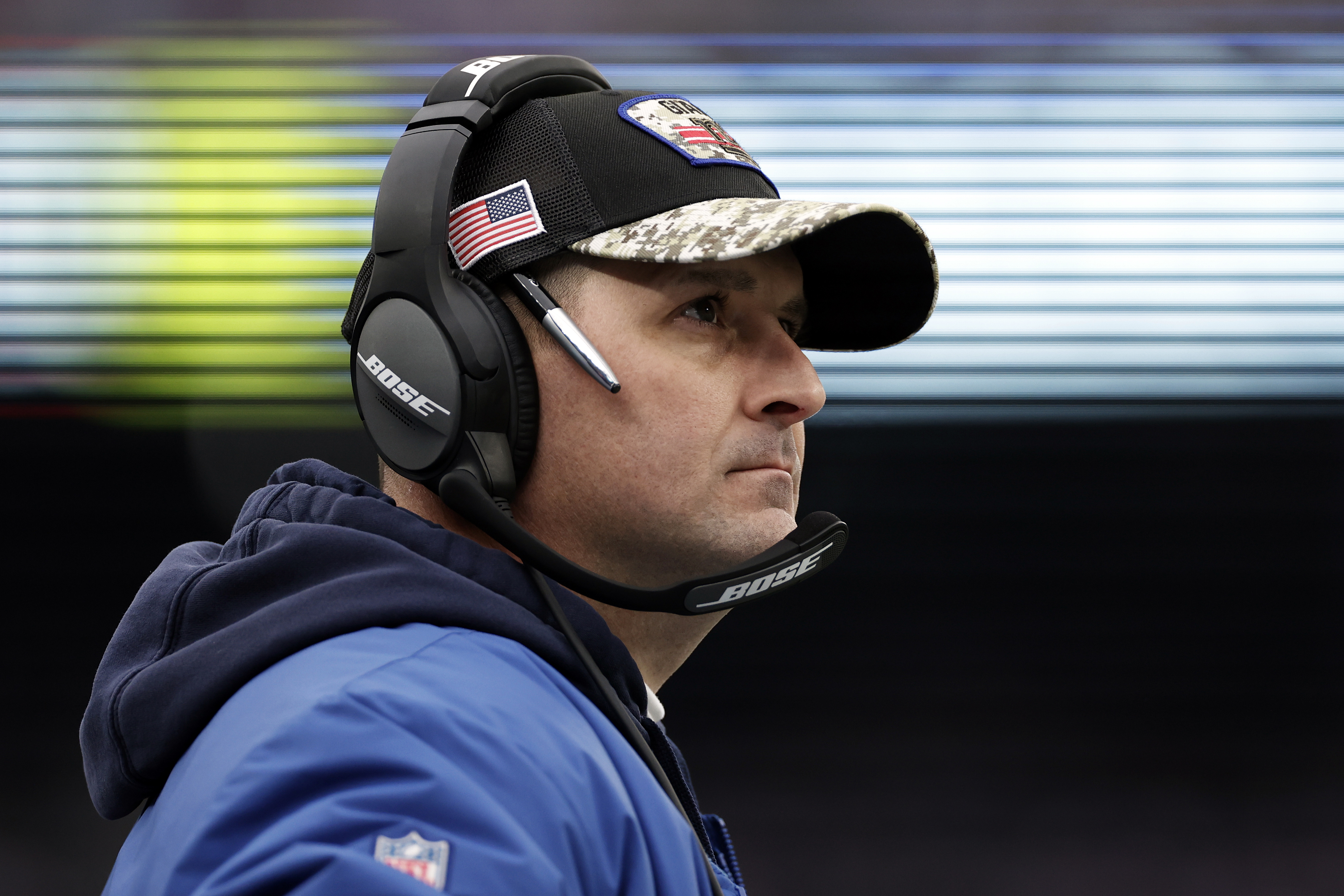 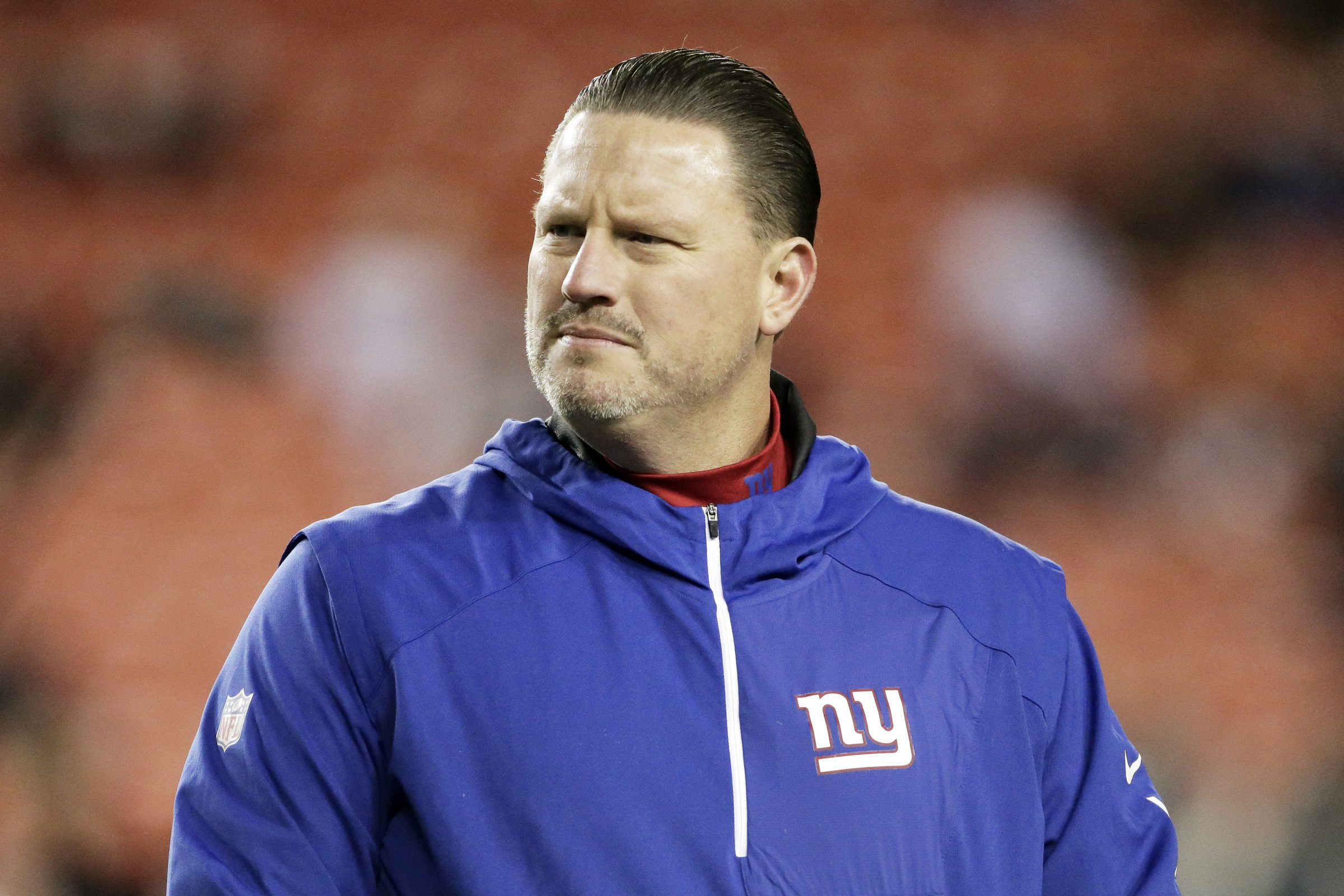 New York Giants coach Ben McAdoo stands on the field before the team's NFL football game against the Washington Redskins in Landover, Md., Nov. 23, 2017. The Carolina Panthers are hiring former New York Giants head coach Ben McAdoo to be their new offensive coordinator, according to a person familiar with the situation. The person spoke to The Associated Press on condition of anonymity Friday, Jan. 21, 2022, because the team is still finalizing the details of the contract. (AP Photo/Mark Tenally, File) 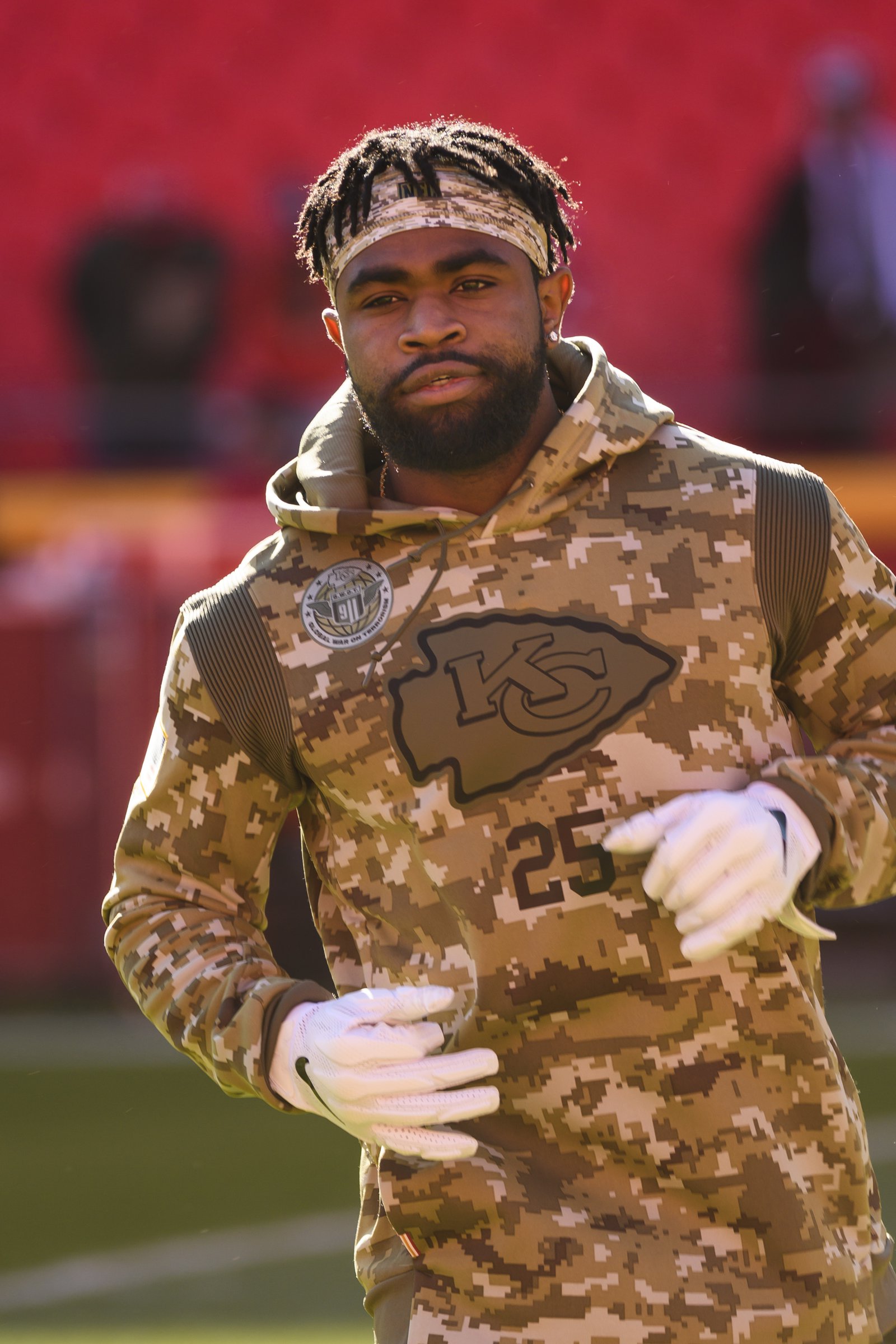