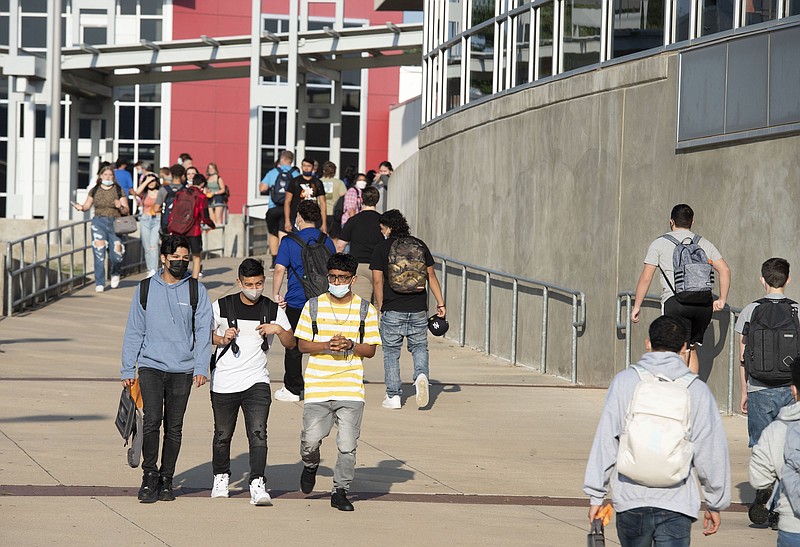 The number of active cases of covid-19 among students and employees in the state's public school districts shot up by thousands to 20,937, according to the Arkansas Department of Health report released Friday.

In comparison, the total number of active cases reported as recently as Tuesday -- the day after a holiday weekend -- was 10,124.

The total number of active cases reported on Jan. 13 was 12,109, which was the previous record number for schools during the pandemic that began in early 2019.

The Rogers School District had the highest number of active cases in Friday's report, 872.

In all, a total of 239 of the state's 261 public traditional and charter schools had at least five active covid-19 cases.

Active cases among students and staff members in the state's private elementary and secondary schools increased from 608 earlier this week to 960 in Friday's report. Thirty private schools had more than five cases, with Mount St. Mary Academy in Little Rock topping the list with 35 cases.

In contrast to the elementary and secondary schools, Friday's report on active cases in the colleges and universities showed only 167 cases, down from 230 cases earlier in the week.

Ivy Pfeffer, deputy commissioner of the Arkansas Department of Education, said Friday that the impact of covid on the state's school systems lessened this week as compared with the week before.

Speaking at Gov. Asa Hutchinson's media briefing on Friday, Pfeffer said a total of 49 districtwide shifts from onsite classes to virtual instruction occurred this week. That was because of covid-19 outbreaks and quarantines as well as weather issues. The 49 total district shifts compares with 108 shifts to online teaching and learning that occurred last week.