Blinken sees another meeting likely by Compiled by Democrat-Gazette Staff From Wire Reports | January 22, 2022 at 4:23 a.m. 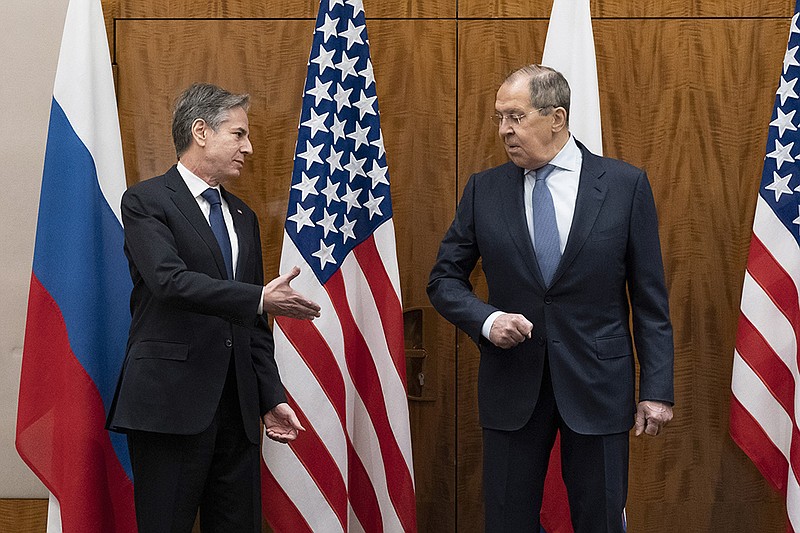 Secretary of State Antony Blinken (left) and Russian Foreign Minister Sergey Lavrov exchange greetings Friday in Geneva. After the meeting, Blinken said he believed “we are now on a clearer path to understanding each other’s positions.” (AP/Alex Brandon)

GENEVA -- Top U.S. and Russian diplomats agreed Friday to keep talking in the standoff over Ukraine, even though their meeting produced no movement in the crisis that has seen Moscow mass tens of thousands of troops at the border and the West ramp up supplies of weapons to Kyiv.

With fears of an invasion of Ukraine running high and seemingly intractable demands, U.S. Secretary of State Antony Blinken and Russian Foreign Minister Sergey Lavrov met for about 90 minutes in Geneva at what the American said was a "critical moment."

Expectations were low going in, and there was no breakthrough.

Blinken told Lavrov the U.S. would give Russia written responses to Moscow's proposals next week and suggested the two would probably meet again shortly after that -- offering some hope that any invasion would be delayed for at least a few more days.

Blinken said the U.S. and its allies remain resolute in rejecting Russia's most important demands, which were reiterated Friday. Moscow wants NATO to promise that neither Ukraine nor Georgia will ever be added as a member and that no alliance weapons will be deployed near Russian borders, and that it pull back its forces from Central and Eastern Europe.

Despite that, there was no indication the U.S. responses would be any different from the rejections already expressed by Washington and its allies, clouding diplomatic efforts.

"We didn't expect any major breakthroughs to happen today, but I believe we are now on a clearer path to understanding each other's positions," Blinken said.

He said he also wanted to use the opportunity to share directly with Lavrov some "concrete ideas to address some of the concerns that you have raised, as well as the deep concerns that many of us have about Russia's actions."

Blinken said Lavrov repeated Russia's insistence that it has no plans to invade Ukraine, but the U.S. and its allies were not convinced.

[Video not showing up above? Click here to watch » arkansasonline.com/122kirby/]

"We're looking at what is visible to all, and it is deeds and actions and not words that make all the difference," he said, adding that Russia should remove its troops from the Ukrainian border if it wanted to prove its point.

Lavrov called the talks "constructive and useful" but declined to characterize the U.S. pledge.

"I can't say whether we are on the right track or not," he told reporters. "We will understand that when we receive the U.S. written response to all of our proposals," and he urged Washington to make its response to the proposals public.

Blinken suggested there was no leeway on Russia's demands, declaring: "There is no trade space there: None."

The U.S. and its allies say Russian President Vladimir Putin knows the demands are nonstarters, adding that they're open to less-dramatic moves.

Blinken said he laid out ideas for the Russian delegation on issues including arms control and military exercises that he said could prove to be areas of compromise.

"We'll see if that bears out," he said. "And meanwhile, we will continue to prepare resolutely to both paths that we've laid out for Russia -- the path of diplomacy and dialogue, or the path of renewed aggression, confrontation and consequences."

Blinken also said the U.S. would be open to a meeting between Putin and President Joe Biden if it would be "useful and productive." The two have met once in person, in Geneva, and have had several virtual conversations on Ukraine that have proven largely inconclusive.

An estimated 100,000 Russian troops have been sent to areas near Ukraine, and more were moving in for training exercises with neighboring Belarus.

"Today Ukraine is at the forefront of separating Europe from the military conflict with Russia," said Estonian Defense Minister Kalle Laanet. "Let's face it -- the war in Ukraine is ongoing and it is important to support Ukraine in every way we can so that they can resist the aggressor."

The Pentagon said the USS Harry S. Truman aircraft carrier and its strike group will participate in a NATO exercise in the Mediterranean, which will continue through Feb. 4 -- something that has been planned since 2020, said Pentagon press secretary John Kirby. He said officials considered whether to go ahead with the exercise because of the ongoing tensions and decided to do so.

Kirby said the exercise wasn't planned anticipating a Russian move on Ukraine and is "not designed against any of the kinds of scenarios that might happen with respect to Ukraine."

On Thursday, Russia announced naval maneuvers through February, some apparently in the Black Sea.

[Video not showing up above? Click here to watch » arkansasonline.com/122guterres/]

The U.S. and its allies scrambled to present a united front. Washington and its allies have repeatedly promised consequences such as biting economic sanctions against Russia -- though not military action -- if it invades.

Blinken repeated that Friday, saying the U.S. and its allies were committed to diplomacy but also committed, "if that proves impossible and Russia decides to pursue aggression against Ukraine, to a united, swift and severe response."

After the meeting, Blinken spoke by phone with Ukrainian Foreign Minister Dmytro Kuleba to brief him on his talks this week, reaffirm U.S. support for Kyiv's sovereignty and stress that no decisions would be made without his country's input, State Department spokesman Ned Price said. He also will brief the foreign ministers of Washington's European allies.

In other diplomatic moves, President Sauli Niinisto of Finland said he spoke with Putin by phone on European security and Ukraine, saying it was "imperative to preserve peace in Europe," according to his office.

President Recep Tayyip Erdogan of NATO member Turkey, which touted its strong ties with Russia and Ukraine, renewed an offer to mediate between the two countries. Erdogan said he plans to visit Kyiv next month, adding that he would also hold talks with Putin.

Ukraine is already beset by conflict. Russia seized control of Ukraine's Crimea Peninsula in 2014 and backed a separatist insurgency in eastern Ukraine, part of a simmering but largely stalemated conflict that has killed 14,000 people. Putin faced limited international consequences for those moves, but the West says a new invasion would be different.

Blinken met Ukraine's president in Kyiv and top diplomats from Britain, France and Germany in Berlin this week.

Blinken's effort to stress U.S. unity with its allies took an apparent hit Wednesday when Biden drew widespread criticism for saying retaliation for Russian aggression in Ukraine would depend on the details and that a "minor incursion" could prompt discord among Western allies.

The White House quickly deployed senior officials to clarify those remarks, but they still triggered an icy response from Republican lawmakers and from Ukrainian President Volodymyr Zelenskyy.

On Thursday, Biden sought to clarify his comments by cautioning that any Russian troop movements across Ukraine's border would constitute an invasion and that Moscow would "pay a heavy price."

"I've been absolutely clear with President Putin," Biden said. "He has no misunderstanding: Any, any assembled Russian units move across the Ukrainian border, that is an invasion."

Adding to its warnings, Washington stepped up sanctions Thursday by slapping new measures on four Ukrainian officials who Blinken said were at the center of a Kremlin effort begun in 2020 to damage Kyiv's ability to "independently function."

The United States and allies say countries such as Ukraine are entitled to their own alliances as part of sovereign security measures, but Lavrov countered that the Organization for Security and Cooperation in Europe has also agreed that no nation can ensure its security by undermining that of others.

BIGGER THAN IT LOOKS

Blinken this week described expanded conflict in Ukraine as a threat to the global rule of law and a signal to autocrats that borders can be redrawn by force.

"It's bigger than Russia and NATO," he said. "It's a crisis with global consequences, and it requires global attention and action."

While Blinken has stressed transatlantic unity, NATO allies continue to have differences over some aspects of the Ukraine crisis, including the role that European energy supplies should play in any response to Russian action and how quickly, if at all, Ukraine should join NATO.

In eastern Ukraine, a soldier stationed near the front line with Russia-backed separatists called Blinken's visit to Kyiv "very important for our country."

The soldier, who identified himself only by his first name, Serhiy, in line with official rules, voiced hope that if Russia attacked, "we can count on our forces' and our allies' power." 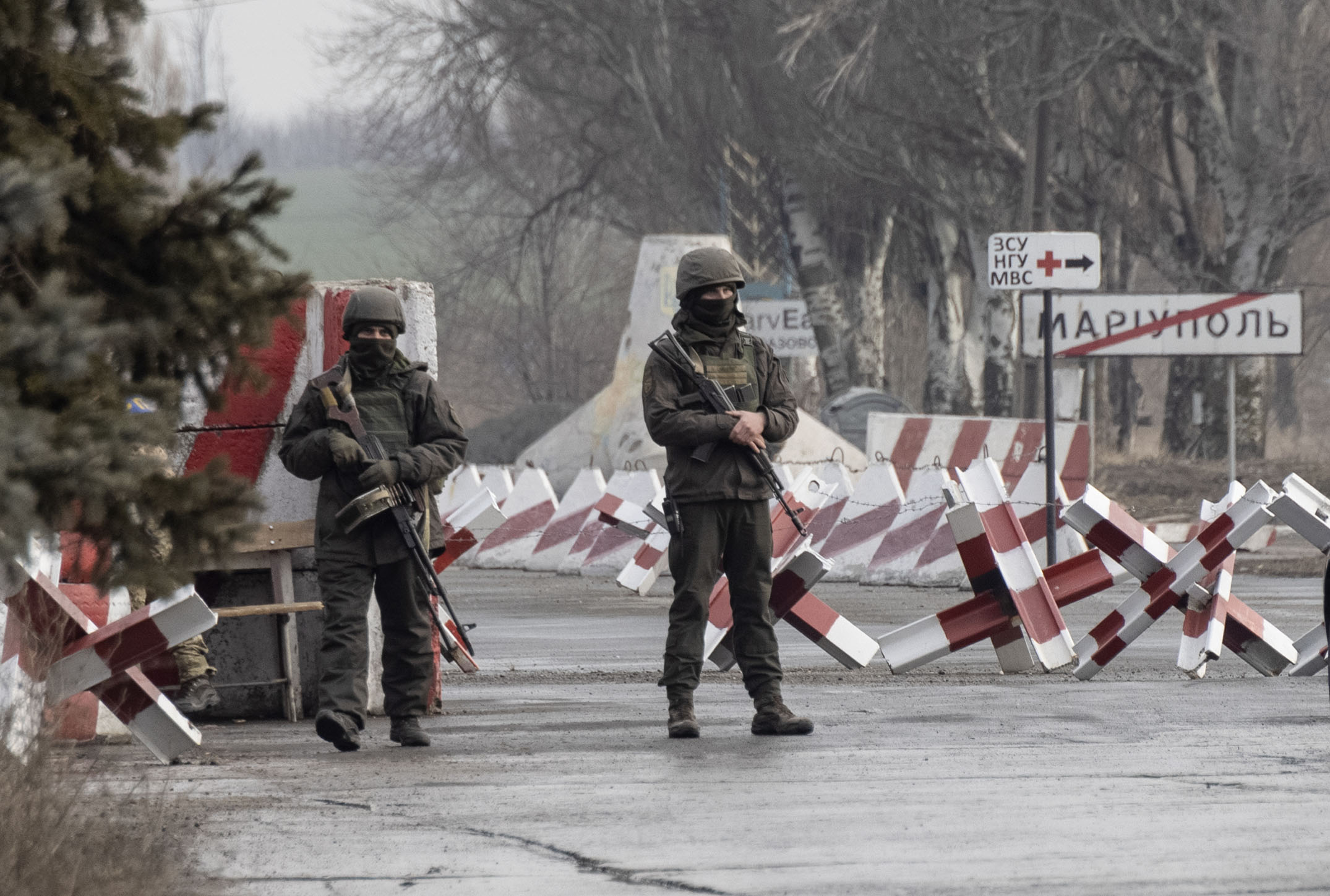 Ukrainian soldiers stand guard Friday at a checkpoint near the line of separation from pro-Russian rebels in Mariupol in eastern Ukraine. With fears of a Russian invasion of Ukraine running high, Secretary of State Antony Blinken and his Russian counterpart held talks Friday in Geneva with little change in their positions. (AP/Andriy Dubchak)