Temple takes shape: Sacred space will be first of its kind in Arkansas

Sacred space will be first of its kind in Arkansas by DEBBIE MILLER Special to NWA Democrat -Gazette | January 22, 2022 at 2:54 a.m. 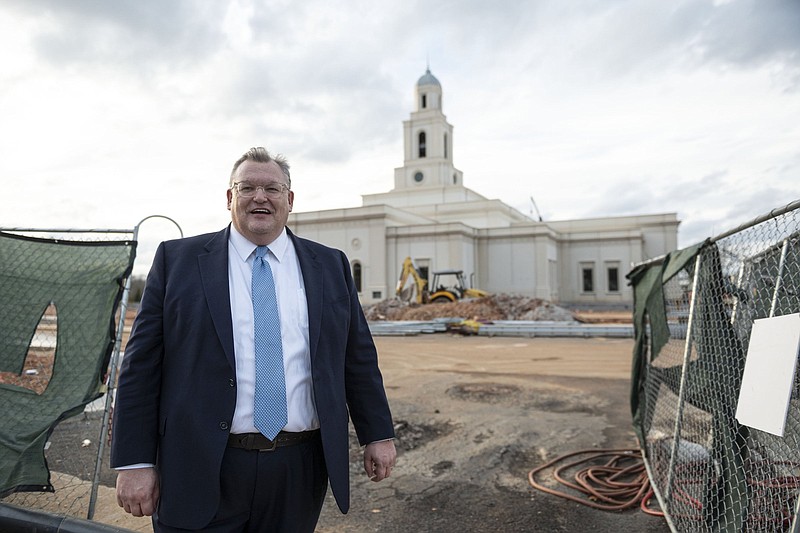 Simon Keogh, president of the Bentonville Stake of The Church of Jesus Christ of Latter-day Saints, stands in front of the temple being built in northeast Bentonville. It is expected to be completed late this year. (NWA Democrat-Gazette/Spencer Tirey)

For motorists racing south along Interstate 49, just a glimpse of the massive structure can prompt a double take. Pale stone walls form the broad base; in the center, smaller towering layers taper toward what will eventually be a spire stretching to the heavens.

"Impressive" could be the casual observer's description of what will be the only temple of its kind in Arkansas. Simon Keogh hopes other words are more closely linked: "inspiring" and "uplifting," for example. Keogh is president of the Bentonville Stake of The Church of Jesus Christ of Latter-day Saints.

"As a sacred place of worship, we want it to be uplifting, edifying and inspiring for people," Keogh says. "The building has the ability to inspire, but that is a reflection of what happens inside."

In The Church of Jesus Christ of Latter-day Saints, temples are distinct from the regular meetinghouses where worshippers gather on Sundays. Temples are specially set apart for sacred services and ceremonies, according to the website churchofjesuschrist.org.

Church members in Bentonville have previously traveled to temples in Kansas City, Mo., or Oklahoma City for covenant ceremonies that are central to the faith.

Keogh says people may sometimes ask why church members desire to build a temple when they already have a meetinghouse or chapel in place. Keogh traces such a key sacred space to before the time of Jesus Christ. Israelites made covenants with Jehovah in the temple, he notes.

When Christ came, he went to the temple as a boy and was instructing the wise men, according to Luke, Chapter 2, Keogh recounts. Later, at the beginning of Christ's ministry, he was again at the temple. After Christ's death and ascension, his followers continued to attend temple, Keogh notes.

"Temple worship has been a pre-Christ ritual," he says. "It was a ritual in Christ's life, and it continued to be a ritual in the lives of his followers after Christ's life. That remains true today for followers of The Church of Jesus Christ of Latter-day Saints. The temple becomes a central part of our connection with heaven and with God."

A tenet of faith within The Church of Jesus Christ of Latter-day Saints is that families can be together forever, and the temple plays a central role in making such permanent bonds possible. For example, Keogh says Latter-day Saints believe that when a marriage ceremony is conducted in a temple under the appropriate authority, marriage can be for time and all eternity.

Elder Jon Paget and Sister Debbie Paget are full-time missionaries assigned to the area to support the construction of the temple. They arrived on the day of the groundbreaking, Nov. 7, 2020, and will be departing in October of this year.

Elder Paget is an architect by trade, and though he doesn't have oversight authority on the construction work, he and his wife provide an important connection among the community, the Church and the construction project.

"We do have the opportunity to document the progress of the temple and to visit with people here in our visitors center who might want to know about our temple," he explains.

The visitors center is a small building adjacent to the temple grounds off McCollum Drive in northeast Bentonville. Inside the center walls is a collection of information about the purpose of a temple and specific features of the Bentonville structure. A sample board contains pieces of the stone being used -- sourced from Turkey -- the fabric patterns to be used in some of the seating, and the wall coverings for a special bridal room and for the celestial room, the most sacred of spaces in the temple and intended to be a place of quiet peace, prayer and reflection.

Keogh says that just as in the Old Testament, when the children of Israel built the temple of the finest materials they could source, Latter-day Saints seek to use the best construction and highest quality materials in constructing a temple.

"We try to build to the very highest construction standards," he says. "Some of that is a metaphor for what we hope our faith and devotion to be. We consider temples to be literally the house of the Lord and sacred."

Maps on the wall denote a mark for each of the temples in the United States and around the globe. The Bentonville temple is one of 265 such temples in place, under construction or announced.

When finished, the structure will have 25,000 square feet of usable space, Paget says. The height from the floor of the building to the top of the dome will be 100 feet, and the distance to the top of the spire will be 111 feet. Completion is estimated to be late this year.

Each temple's features include some customization unique to the region, Paget says. In the Bentonville temple, dogwood blossoms are etched in the stone around the windows. "Every window, even the ones in the tower, will have art glass behind the regular glass and will be backlit."

In addition to documenting the construction work and sharing information with visitors, the Pagets play additional important roles, Keogh says.

"They take the time to share with the contractors why this building is of such religious significance to us as the members," he says. "That gives them a chance to appreciate what they're building. They help us be connected with those artisans and construction workers. It brings a sense of community and oneness, and we feel like it brings the spirit of Jesus Christ to the process."

The Pagets also have organized special luncheons and gift baskets for special seasons to give to those involved in the work. "The little children have written lots of 'thank you' notes that we give to them," Debbie Paget says with a smile. "It's been wonderful."

When the structure is completed, there will be open houses and tours prior to dedicatory services. Once the temple begins its service as a functioning temple, anyone meeting the qualifications of faithfulness and preparation can enter, Keogh says. Local congregation leaders will issue a small "recommend," a card that validates one's readiness and preparation to enter into the temple.

Decisions about the location of a temple are based on need relative to the strength of membership, Keogh says. The growth of the church membership in Arkansas and southern Missouri was a factor. According to information provided at the time of the 2020 groundbreaking, the church counts more than 32,000 Latter-day Saints in Arkansas, spread throughout nearly 70 congregations.

The travel distance to the nearest temple also is considered in temple location decisions. Most of the members in North America live within a four-hour drive of a temple, Keogh notes. Previously, the trips to Oklahoma City or Kansas City, Mo., required members to allocate an entire day. The location in Bentonville provides greater access for the Latter-day Saints throughout the region.

Each temple is considered a "house of the Lord," where Jesus Christ's teachings are reaffirmed through baptism and other ordinances that unite families for eternity. Keogh recalls his own marriage in a temple and being there when his daughter was married in a temple.

"It's quite the thing for families to gather together and enter in there," he says. The couple kneel across the altar from each other and someone with the authority to bind in heaven as well as on earth performs the marriage sealing ceremony, he said.

"That's perhaps one of the most uplifting and pinnacle blessings of our faith is to know that our marriages and our relationships as families will be recognized and in force in heaven," Keogh says.

Jon Paget says he has realized that the temple will perhaps be the first thing people entering Bentonville from the north will see from the interstate.

Keogh speaks of the beauty the structure and the planned gardens around it will provide to the community. That is in keeping with the nature of the temple -- an offering to God.

"For a place where you make covenants or promises, if you will, commitments with God that will be in effect out of this life, as well as in it, you would want it to be as beautiful and as uplifting and as edifying as possible," Keogh says. "Even the sense of the building, you would want it to bring permanency or even a sense of eternity and of stability to your worship. That's what the temple is for us."

Debbie Miller is a longtime writer and editor who now teaches college-level journalism. Email her at debmiller25@cox.net. 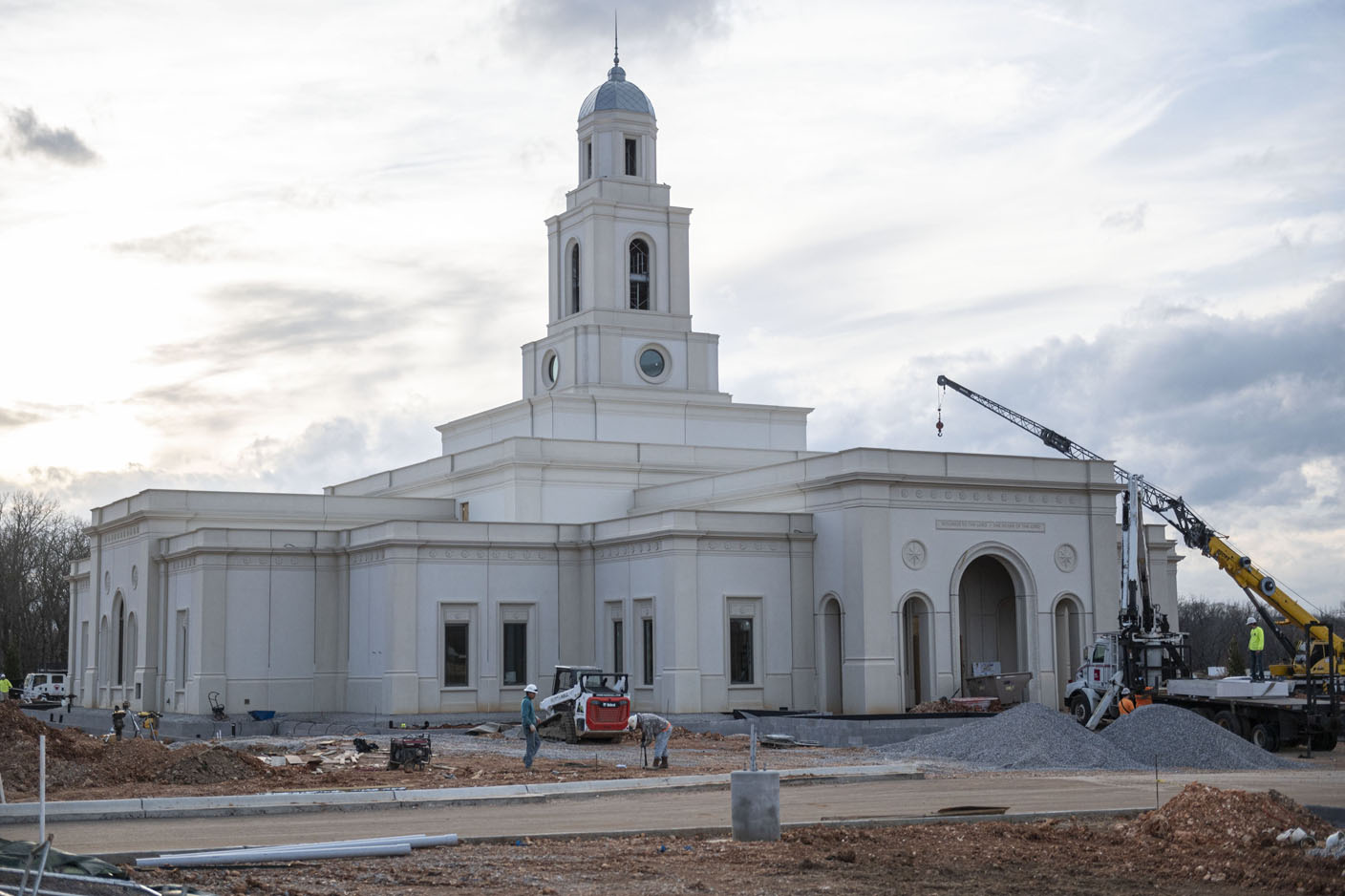 Groundbreaking ceremony: Presiding from a remote location, Elder David A. Bednar of the Quorum of the Twelve Apostles dedicated the site for the Bentonville Temple. Bednar, once a professor at the University of Arkansas, has assisted in the organization of two Arkansas stakes, including the Bentonville Stake.

Temple Facts: The Bentonville Temple will be the first LDS temple built in Arkansas. 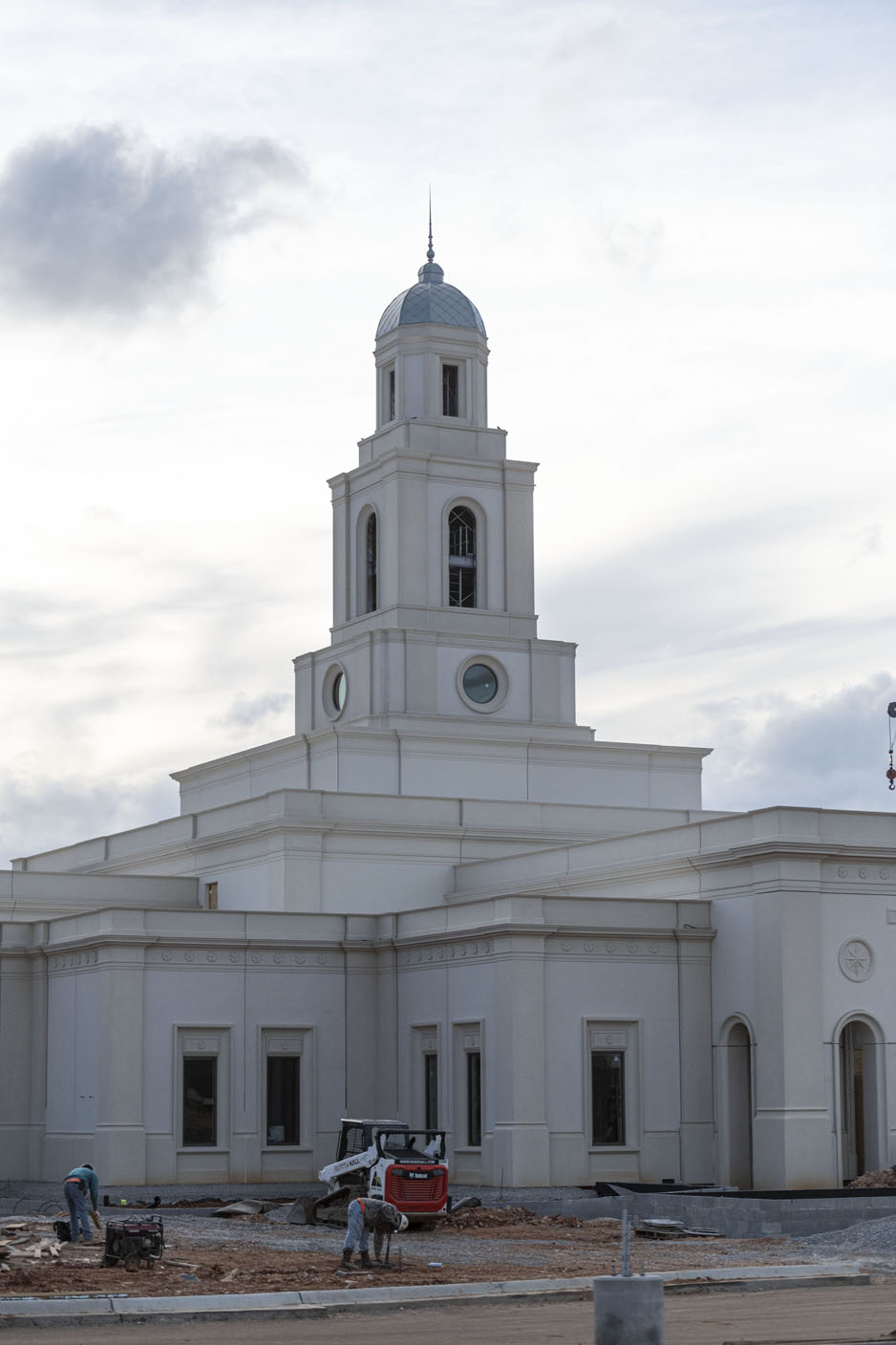