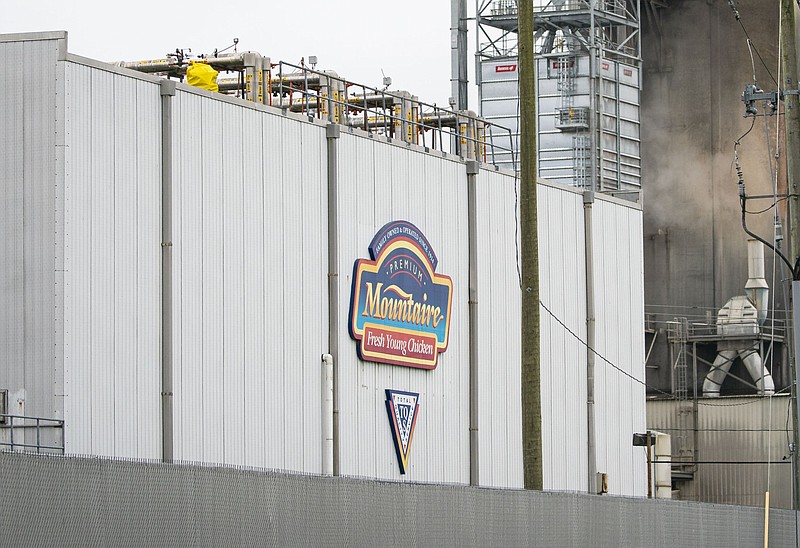 The Mountaire Farms logo is seen on a chicken processing plant in Millsboro, Del., in this undated file photo. Mountaire Farms bills itself as the fourth-largest chicken company in America. Founded by Guy Cameron and currently chaired by Ronald Cameron, Mountaire Corp. has people at facilities in Arkansas, Delaware, Maryland, Virginia and North Carolina through its operating affiliates Mountaire Farms Inc. and Mountaire Farms of Delaware Inc., according to the company's website. (Photo for The Washington Post by Al Drago)

Cameron, the chairman of Mountaire Corp., keeps a low public profile despite his history of high-dollar contributions to Republican groups. Many of his contributions are tied to a post office box in Little Rock, according to filings from the Federal Election Commission.

Mountaire is the fourth-largest chicken company in America, according to its website. Cameron's grandfather founded the company more than a century ago.

For the 2022 midterm election cycle, Cameron has poured more than $1.9 million into direct efforts to help Republicans gain control in the U.S. House and Senate, either through political action committee spending or contributions to individual campaigns, according to available campaign finance filings. The funds were received from November 2020 to September 2021. Those contributions are on top of more than $2 million he's sent to other political committees during the midterm election cycle.

Fourth-quarter contributions to House and Senate campaigns, covering October through December, are to be filed with the election commission by the end of this month.

Emails and phone calls seeking to reach Cameron for comment were unsuccessful. Mountaire did not respond to emailed questions from the Arkansas Democrat-Gazette.

These political contributions -- totaling at least $3.9 million so far this midterm election season -- make Cameron one of the biggest political donors in Arkansas, said Karen Sebold, an assistant professor of political science at the University of Arkansas, Fayetteville.

"So you hear about Michael Bloomberg all the time. You hear about George Soros all the time. But you don't hear about Ronnie Cameron very often," Sebold said. "So that's what kind of makes him unique is that he is right up there with those big donors, those big spenders. But he doesn't receive that kind of attention because most people aren't familiar with him."

The chicken mogul has traditionally given to GOP groups and to conservative Super PACs like Club For Growth Action and Americans for Prosperity Action, said Sebold, who specializes in campaign finance. Cameron has contributed $2 million between those two groups in this midterm election cycle, according to available election commission data.

Republicans in this election cycle are pushing to gain power in Congress. Democrats are operating with a razor-thin majority in the Senate. In the House, Democrats hold a slim majority, but many party incumbents are retiring or seeking other offices.

Democratic Party of Arkansas Chairman Grant Tennille said Cameron holds a significant amount of influence. But based on his low public profile, Cameron appears to prefer to wield that power out of the limelight, Tennille said.

The typical Republican voter in Arkansas won't likely know about Cameron and the influence he holds in the state and across the nation, Tennille said.

Over the years, Cameron has given millions of dollars to political committees that have supported former President Donald Trump.

Earlier in the coronavirus pandemic, the Trump White House announced that Cameron would be part of a panel of advisers on economic revival.

"That's a high-profile position for someone out of the state of Arkansas," Sebold said.

The political spending, Sebold said, grants Cameron a proximity to people in power who can benefit his industry.

Cameron's grandfather, Guy Cameron, founded Mountaire in 1914, and the company started processing chickens in De Queen decades later, according to its website.

Mountaire Corp., along with operating affiliates Mountaire Farms Inc. and Mountaire Farms of Delaware Inc., has people at facilities in Arkansas, Delaware, Maryland, Virginia and North Carolina, the company says on its website.

Republican congressional campaigns across the nation reported receiving more than $420,000 from Ronald Cameron between March and September of last year, according to available election commission filings.

The votes in the House came after a mob backing Trump fought its way into the U.S. Capitol in an attempt to stop the certification of President Joe Biden's election victory.

Cameron is backing a variety of candidates, from well-established Republicans like House Minority Leader Kevin McCarthy of California and Sen. Marco Rubio of Florida to newer members of Congress.

During this election cycle, Cameron has contributed to Reps. Lauren Boebert of Colorado and Madison Cawthorn of North Carolina, two Republicans who have stoked controversy while in office.

The video posted on Twitter showed Boebert implying that Omar was mistakenly thought to be a terrorist while at the Capitol.

"I look to my left and there she is, Ilhan Omar. And I said, 'Well, she doesn't have a backpack; we should be fine,'" Boebert said, garnering claps from an audience.

Cameron's donation to Boebert came months before the video of her remarks against Omar made headlines.

Cameron is also backing Arkansas incumbents. He gave money to the reelection campaigns of Sen. John Boozman of Rogers and Rep. French Hill of Little Rock.

Cameron isn't the only Arkansan spending big during the midterm election season. Available filings show that Warren Stephens, the chairman, president and CEO of Stephens Inc., has poured $2 million into the Senate Leadership Fund, a Super PAC aimed at building a Republican majority in the Senate.

Through a spokesman, Stephens declined to comment to the Democrat-Gazette.

Many people still tend to think of donors from Walmart Inc. or Tyson Foods Inc. as the biggest out of Arkansas, but they are traditionally not, said Sebold. The bigger spenders are from Stephens Inc. and Mountaire Corp., she said.

Cameron has given $1.5 million to Americans for Prosperity Action during this midterm election cycle, according to the election commission's website.

Cameron also sent half a million dollars to the Club For Growth Action, which is dedicated to "defeating big-government politicians and replacing them with pro-growth, limited government conservatives," according to its website.

"We do this by running independent hard-hitting TV, radio, Internet, and direct mail campaigns in critical Senate and House races across the country," it says on the website.