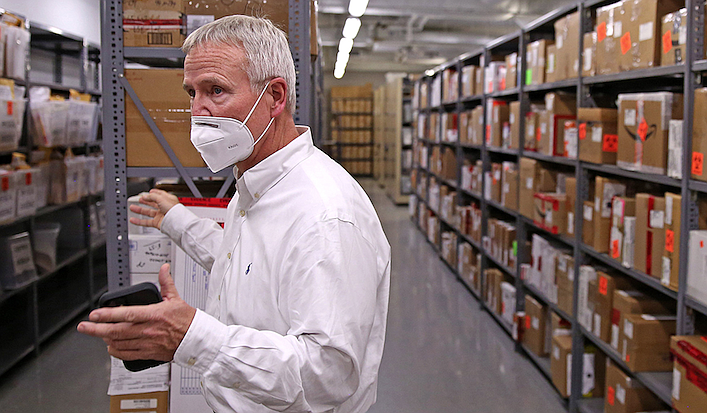 After hearing the average turnaround time is about 10 months, Arkansas lawmakers said they want the state Crime Laboratory to be able to comply with a 2019 law requiring completion of tests on sexual-assault evidence kits within 60 days of receiving them.

Lawmakers also plan to take a closer look at the Crime Lab's building needs, after they learned a consultant put a roughly $183 million price tag for a new building to replace the lab's 40-year-old building in west Little Rock.

These issues were discussed last week during the Arkansas Legislative Council and Joint Budget Committee's hearing on the state Department of Public Safety's proposed budget for fiscal 2023 in advance of the fiscal legislative session starting Feb. 14. Fiscal 2023 starts July 1.

The laboratory is internationally accredited and provides services to local, state and federal law enforcement agencies in forensic pathology, toxicology, physical evidence, drug analysis, latent fingerprint identification, firearms and toolmarks, digital evidence and DNA for the entire state of Arkansas, according to the Phoeniz-based consulting firm Smith Group. The Crime Lab was established by Act 517 of 1977.

The lab also participates with several federal agencies in the collection of data from DNA, latent fingerprints and firearms.

During Tuesday's budget hearing, Sen. Bart Hester, R-Cave Springs, asked whether there is still a backlog of sexual-assault evidence kits and whether the lab has sufficient staff to comply with state law.

Channell said Act 839 of 2019 "required us to have a backlog turnaround time [for the kits] basically of 60 days ... and we are not able to fulfill that requirement as of yet."

He said the laboratory is one of the most efficient in the nation and the world.

Hester answered, "I would say look at it between now and the fiscal session, and we are ready to act."

Channell said there is a backlog of about 705 sexual-assault evidence kits in which a DNA report has not been issued.

The turnaround time on the kits is about 10 months, "not 60 days, so those are things that we are looking at," he said.

Channell said the lab receives about 70 to 80 sexual-assault evidence kits a month and each DNA analyst can do four or five of the kits per week in addition to other duties.

Afterward, he said in an interview that the lab has 13 DNA analysts processing the kits and two others in training. The lab is in the process of hiring two other analysts, he said.

Channell said the lab probably needs five more DNA analysts "to get where we want to be." He said he would have to find good qualified people coming out of college and train them up over the next year.

He said he would like to get add five more forensic scientists. Their starting salary is nearly $46,000 a year, he said.

If the lab is authorized to hire five more forensic scientists, it would take the lab until the end of 2023 to get the backlog of kits down to where it should be because the training program lasts a year, he said.

Channell told lawmakers told the lab has 11 vacancies among its 148 positions. The lab's turnover rate is about 10% a year, which is relatively good for a state agency, he said.

Elliott said she applauds the lab for being efficient, "but if we are not effective along with that, it's a whole another thing."

Sen. Kim Hammer, R-Benton, asked if the lab's ability to be efficient is limited because of its building.

"With forensic science, there is always a growing need and our building is approximately 40 years old," Channell said.

The building is at 3 Natural Resources Drive in west Little Rock and is adjacent to the Arkansas Department of Agriculture and Arkansas Game and Fish Commission buildings.

Channell said the Smith Group has completed a feasibility study financed with federal grant funds to project what the Crime Lab needs for a new building to last 30 years. The Smith Group worked with Polk, Stanley, Wilcox Architects of Little Rock, he said.

Rep. Jim Wooten, R-Beebe, pressed Channell for the consultant's estimate of the cost of constructing a new building for maintaining certification.

"This is vital to supporting law enforcement and prosecuting attorneys and everyone," he said.

"We don't have a budgeted amount," Channell said, but added the estimated price tag is about $183 million.

"I don't know where I ask for $183 million," he said when Hester asked what part of state government Channell would seek funding through for a new building.

According to the Smith Group's report, the lab's building underwent a lengthy renovation that began in 1997 and ended in 2002.

Federal grants paid for renovations and they did help, Channell said.

The facility is at capacity with no practical options for on-site renovation or expansion, the consultant said.

"The building as its exists today is continuously affected by outdated mechanical, electrical and plumbing systems., inadequate structural capabilities, and inflexible spaces," the Smith Group said.

"These challenges impact workflow optimization efforts, the ability to increase section productivity (through additional instrumentation and equipment) and in some cases a safety and security risk (decedent intake, ventilation, and electrical systems)."

A facility of about 190,000 square feet would be needed to meet the needs of the state through 2051, the Smith Group said.

"Based on national cost trends, the total project cost at a potential midpoint of 2024 construction period is roughly $182 [million]," including a projected construction cost of roughly $136 million, according to the Smith Group.

Completion of a new facility is expected to require 15 months of design, including programming, followed by a 24-month construction period, the Smith Group said.

During Tuesday's budget hearing, Hammer said he wants evidence from violent crime cases to be processed in a timely manner by the lab, so he asked if it was a building issue, a staff issue or both that kept that from happening.

Channell said it's both.

"You need to have adequate space in order to grow," he said. "With forensic science technology changes, you have to have all the adequate infrastructure to support that.

"Quite frankly, if you gave me 20 individuals today, I wouldn't have the ability to house them," Channell said.

There is no room to expand the medical examiner's office in the building's basement, he said.

Rep. Mark Berry, R-Ozark, said he has visited the Crime Lab and he encouraged other state lawmakers to visit to learn about the lab's needs.

"He is being a lot more gracious than I would be if I was sitting in his position," Berry said, referring to Channell.