California water district to put restrictors on flows for wasters 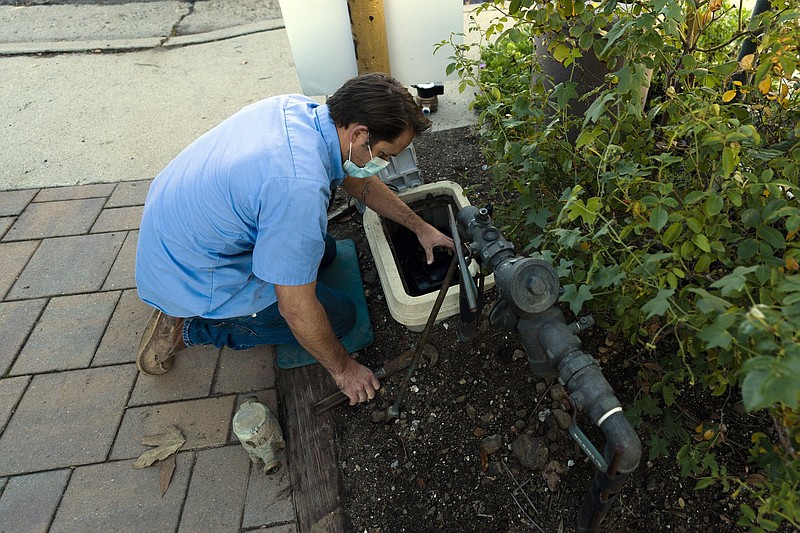 In a wealthy enclave nestled in the Santa Monica Mountains that is a haven for celebrities, residents now face more aggressive consequences for wasting water -- including the threat of having their water flows slowed to a trickle if they repeatedly flout conservation rules.

The Las Virgenes Municipal Water District northwest of Los Angeles offers a bold example of how local authorities across drought-stricken California are trying to get people to use less water, voluntarily if possible but with the threat of punishment if they don't comply.

Before restricting water flows, the district hopes to spur savings by giving households a real-time look at their water use and stepping up fines for those homeowners who exceed their allotted "water budgets."

District officials hope their approach will be a wake-up call for residents of the affluent neighborhoods, where most water is used outdoors to keep expansive yards looking verdant and pretty and for pools.

Flow restrictors are a rarely-used tool primarily reserved for people who repeatedly fail to pay bills. Now, the Las Virgenes district is warning that they could be installed on the water connections to homes that have been fined for overuse for three months. In the past, flow restrictors were a possibility after five months of fines, but the district never used them.

"What we're trying to do is conserve water now so that we can stretch the limited supplies we have available," said Dave Pederson, the district's general manager.

California is experiencing the effects of climate change, with drought conditions present for most of the last decade. After two exceptionally dry years left the state's reservoirs at or near record lows, a string of recent winter storms improved conditions. But most of the state is still in severe drought.

In July, Democratic Gov. Gavin Newsom asked residents to voluntarily cut 15% of their water use, but useage had declined only 6% as of November. The state water board last month imposed a series of mild homeowner water use restrictions, such as waiting two days after storms to water lawns. The board could take more significant steps later in the year if the drought intensifies.

California's local districts provide water service, regulate use and enforce penalties. The Las Virgenes district serves about 75,000 people in communities of Agoura Hills, Westlake Village, Calabasas and Hidden Hills -- an area that in recent years has attracted a growing number of celebrities, including Kim Kardashian and Will Smith.

Like much of inland Southern California, the region rarely gets any rain outside the winter months. It's wealthier than most other parts of the state, with a typical Calabasas home selling for more than $1.5 million, according to the online real estate marketplace Zillow.

Despite calls for conservation, water customers in the area increased useage in August and September and then met the state's 15% reduction goal in October before again missing the target in November.

"It appears there has been a lackluster response to the water emergency," said Calabasas Mayor Mary Sue Maurer, who thinks restricting water flows could provide a needed conservation wake-up call.

Due to dry conditions, California regulators said in December they would not provide any water from state supplies beyond what was needed for essentials like drinking and bathing. That could change in the coming months, but allocations likely won't go up significantly unless it's a very wet winter. The uncertainty is particularly stressful for Las Virgenes, which gets about 80% of its water from state supplies.

The district's conservation approach is part carrot and part stick.

A new advanced water metering system for all homes in the district will show customers in real time how much water they're using. The meters, which will all be in place by April except for people who opt out, are designed to help users spot when they are exceeding limits and adjust their behavior, rather than waiting until monthly bills arrive.

Every household has a "water budget," something used by many California water districts. Budget are based on the number of residents in a household and the property size.

Starting this month, customers will face fines if they go 150% over their monthly budgets. Previously, the fine threshold kicked in at 200%, and about 15% of the district's customers were fined, Pederson said. People get a warning the first time they go over budget.

Las Virgenes' approach of advanced metering, fines and the threat of flow restrictors, stands out among the state's more than 400 medium to large water agencies, said Mehdi Nemati, an assistant professor at the University of California, Riverside who works with water agencies on conservation programs but not with the Las Virgenes district.

Only a few dozen districts have the advanced metering systems because they are expensive to install, and few use penalties against residents who overuse. Instead, many districts increase the cost of water as customers use more. But richer Californians did not conserve as much as others during the last drought even when the state mandated it, Nemati said.

It's even rarer for a district to threaten flow restrictors for people who use too much water and Nemati speculated that the Las Virgenes' policy could invite lawsuits.

"The agency's pretty brave if they really want to do that," he said.

The Las Virgenes district doesn't want to be heavy-handed with fines or restrictors, said Pederson, the general manager. Fines start at $2.50 and go as high as $10 for every 748 gallons over the 150% threshold.

The average house in the district uses 19,448 gallons of water per month, the majority of it outside, and district officials said many customers stay within their water budgets.

"Our system helps us to target the message to the people who are really, frankly, the problem," Pederson said.