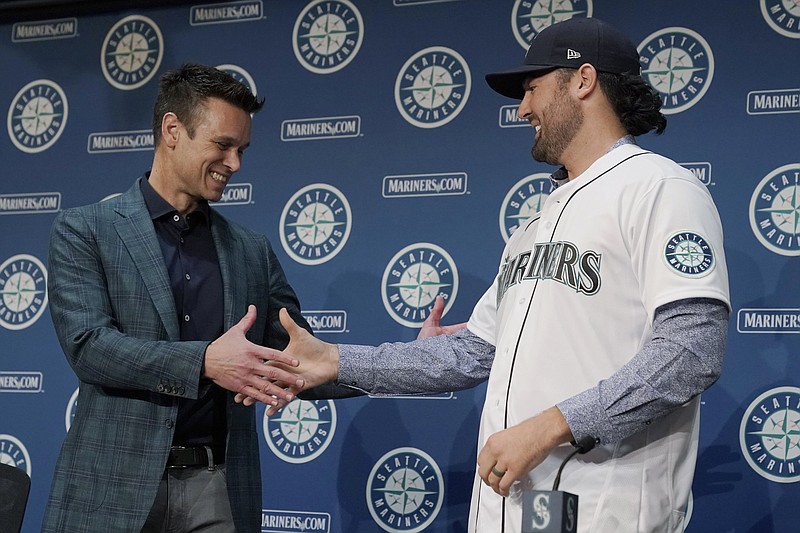 On Dec. 1, the Mariners introduced Ray with great fanfare at a T-Mobile Park news conference, with a beaming General Manager Jerry Dipoto calling it "a great day for the Mariners."

On Dec. 2, Major League Baseball grinded to a screeching halt when negotiations with the MLB Players Association broke down, leading the owners to instigate a lockout.

And just like that, all the momentum, goodwill and anticipation for the 2022 season in Seattle was put on hold, dampened and doused. It has now been 50 days of no tangible movement between the two sides, leading to growing fears that spring training won't start on time next month. Or even more dire, that the start of the regular season is endangered, too.

Obviously, this is a terribly damaging development for MLB, which already has a host of nonlabor issues to deal with that have cut deeply into its overall popularity. The last thing the sport needs is an extended work stoppage that takes away any part of spring training or the season.

But this stalemate hits particularly hard in Seattle, where hopes have rarely been higher, or more legitimate, heading into a season. Not for a couple of decades, anyway. What should be a time of joy and growing anticipation is instead dominated by radio silence. All MLB teams have been ordered to stop player acquisitions. The league is not even acknowledging its players on its own website, where mug shots were replaced by blank silhouettes after the lockout started.

And the current prognosis isn't promising. The first post-lockout bargaining session earlier this week resulted in no tangible progress. In fact, it seemed to have had the opposite effect of hardening the resolve of each side. There is now a sentiment that the owners' strategy is to wait out the players and hope they cave -- much as the management side used to do (cave, that is) in the heyday of the MLBPA under Marvin Miller and Donald Fehr.

This sort of intransigence doesn't bode well for getting this thing settled in time to keep intact the Mariners' March 31 season opener against the Detroit Tigers at T-Mobile Park. And in the interim, all that's happening is that the good feeling about the Mariners' future is being muted, when it should be blaring.

When Ray signed -- part of a barrage of transactions around MLB that week designed to beat the anticipated shutdown -- it seemed that Dipoto was on the verge of making even more moves. Maybe bringing in an infield bat like Trevor Story or Kris Bryant, signing vaunted Japanese slugger Seiya Suzuki, or acquiring another established arm to bolster the rotation.

That would have ramped up even higher the enthusiasm that developed during and after the Mariners' dramatic end to the 2021 season. In what was thought to be another transitional year in the club's rebuild, the Mariners instead won 90 games and went down to the last day with a shot at the playoffs.

With the additions of Ray and second baseman Adam Frazier, and the number of top prospects on the verge of breaking into the major leagues for the Mariners, it's not unrealistic to expect the end of the 20-year playoff drought is at hand.

Yes, things can go wrong, and the Mariners seem ripe for a regression to the mean after defying the analytical projections of a team with a minus-51 run differential.

But they also have the feel of a team that's finally ready to burst out. We've heard that before, of course, but unless everyone in the industry is wrong, they are about to be hit with a deluge of young stars. And with the changing dynamics of the AL West, and the distinct possibility of expanded playoffs on the other end of the lockout, it's OK to dream.

But it's hard to have sweet dreams when the sport is locked in a nightmare.

Yes, this will end at some point. And nothing hastens the melting of antipathy toward baseball more than baseball itself. Grudges tend to dissipate when pitchers and catchers report. But the damage being done to the hearts and minds of baseball fans during the long, dark winter of 2021-22 is tangible.