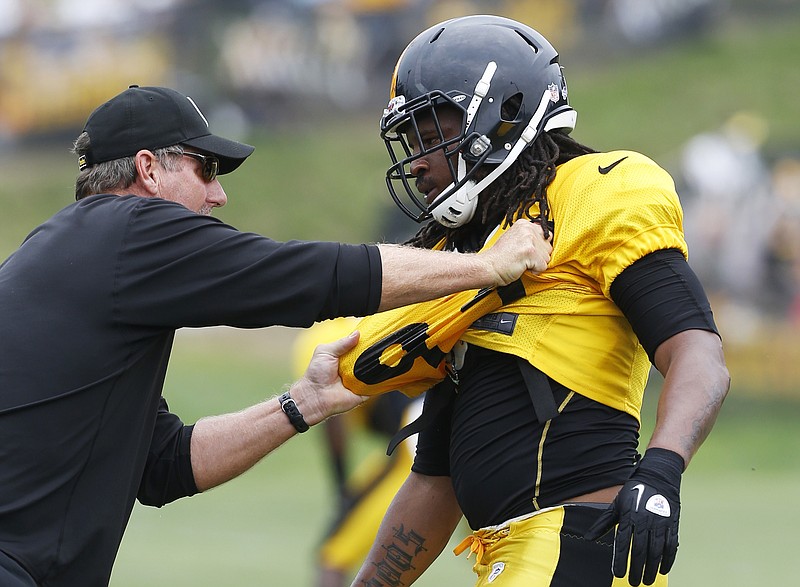 FILE - Pittsburgh Steelers linebacker Jarvis Jones, right, gets some hands-on instruction from linebackers coach Keith Butler during NFL football training camp in Latrobe, Pa., July 31, 2013. Butler retired as the team's defensive coordinator on Saturday, Jan. 22, less than a week after his 19th season with the team ended in a blowout playoff loss to Kansas City. The 65-year-old Butler, who spent 10 seasons as a linebacker for the Seattle Seahawks in the 1970s and 80s before getting into coaching, helped the Steelers win two Super Bowls and reach another during his nearly two decades with the team. (AP Photo/Keith Srakocic, File)

Lee Hodges and Paul Barjon took advantage of a late tee time Saturday to miss the worst of a windy day and share the third-round lead in The American Express. "It was tough early and it kind of died on our back nine a little bit," Hodges said. "It was off and on, but it was a good wind. The easy holes were playing a little easier, but the hard holes were hard. So you just had to make a couple pars and then get to those downwind holes." Playing together in the final group off the 10th tee on PGA West's Stadium Course, the PGA Tour rookies and close friends each birdied the par-5 fifth, par-4 seventh and par-5 eighth and closed with a par. Hodges, a 26-year-old former Alabama golfer, shot an 8-under 64. Barjon, the 29-year-old Frenchman who played at Texas Christian, had a 65. Hodges opened Thursday with a 62 at La Quinta Country Club for a share of the first-round lead with defending FedEx Cup champion Patrick Cantlay, then shot a 72 on Friday on PGA West's Jack Nicklaus Tournament Course. Hodges and Barjon, both making their 14th PGA Tour start, were at 18-under 198.

The University of Hawaii has hired former star quarterback Timmy Chang as its new head coach. Athletics Director David Matlin announced Chang's hiring on Saturday in a release, saying Chang "made a name for himself throwing the football as a young quarterback and has continued his legacy in the collegiate coaching ranks over the past decade. Just last month, Chang was hired by Colorado State to be its wide receivers coach. Previously, he spent five years at Nevada under Jay Norvell -- who is now Colorado State's head coach -- as a tight end and wide receivers coach, and also had coaching stints at Emory and Henry and Jackson State. Chang, who is from Honolulu, set the NCAA's all-time passing (17,072) and total offense (16,910) records when he played for Hawaii from 2000 to 2004. He was also a finalist for the Johnny Unitas Award in his last season with Hawaii. Chang also played in the Canadian Football League and NFL Europe.

Pittsburgh Steelers defensive coordinator Keith Butler retired on Saturday, less than a week after his 19th season with the team ended in a blowout playoff loss to Kansas City. The 65-year-old Butler, who spent 10 seasons as a linebacker for the Seattle Seahawks in the 1970s and 80s before getting into coaching, helped the Steelers win two Super Bowls and reach another during his nearly two decades with the team. He served as the linebackers coach from 2003-14 and was promoted to coordinator in 2015 after Hall of Famer Dick LeBeau's contract was not renewed. Coach Mike Tomlin said earlier in the week that Butler had told him informally he was thinking about stepping down. Pittsburgh (9-7-1) made the playoffs this season while enduring its worst statistical season defensively since 1988. The Steelers finished 24th in yards allowed and were last in the league against the run. Thanks in large part to All-Pro outside linebacker T.J. Watt, Pittsburgh did lead the NFL in sacks for a fifth consecutive season.

New General Manager Joe Schoen and ownership interviewed Buffalo Bills defensive coordinator Leslie Frazier for the vacant opening as New York Giants head coach. Frazier, 62, spoke via video conferencing with co-owners John Mara and Steve Tisch and Schoen, the former Bills assistant general manager who was hired Friday to replace the retired Dave Gettleman. The trio also interviewed Bills offensive coordinator Brian Daboll on Friday for the job that opened when Joe Judge was fired on Jan. 11, two days after finishing a 4-13 season. Frazier has head coaching experience. He was the Minnesota Vikings' interim head coach for the final six games of the 2010, and then served as head coach from 2011-13. The Vikings made the playoffs in 2012. Schoen and Frazier both joined the Bills in 2017, helping Buffalo (11-6) win the last two AFC East titles.

Deiveson Figueiredo beat Brandon Moreno by unanimous decision at UFC 270 on Saturday night in Anaheim, Calif., concluding a thrilling fight trilogy by reclaiming the flyweight championship belt he lost to Moreno seven months ago. Figueiredo (21-2-1) won the bout 48-47 on all three judges' scorecards after a frenetic, physical addition to a rivalry that has featured 13 rounds of outstanding action over the last 13 months. The trilogy began with a majority draw in December 2020 and continued with Moreno's third-round stoppage victory last June in Arizona. Figueiredo and Moreno (19-6-2) traded big shots throughout the third bout, but the Brazilian winner rode a strong start to his first victory since November 2020.

Chicago Bulls guard Alex Caruso will have surgery next week to repair his broken right wrist after he was taken down by Grayson Allen during the third quarter of Friday night's 94-90 loss at Milwaukee. The team said Caruso will be re-evaluated in six to eight weeks. It's another tough blow for Chicago (28-16) after it announced Thursday that guard Lonzo Ball needs arthroscopic surgery on his left knee. Caruso, who turns 28 on Feb. 28, is averaging 8.4 points, 3.9 rebounds and 3.9 assists in 28 games in his first season with Chicago. Caruso was driving to the basket Friday night when a hard foul from Allen caused him to land on his right side.

Dave Ryding became the first British winner in the 55-year history of the Alpine skiing World Cup on Saturday, triumphing in one of the classic slaloms of the men's circuit. Ryding, who was sixth after the opening run, was leading the final leg when he saw the last five racers all make big mistakes and finish well behind -- or not at all. Lucas Braathen, who spectacularly won the slalom in Wengen last week coming from 29th position after the first run, finished 0.38 seconds behind in second, followed by Norwegian teammate Henrik Kristoffersen, who improved from 24th after the opening run. Ryding's triumph came five years after the Briton earned his first career World Cup podium at the same iconic venue in the Austrian Alps, finishing runner-up to Austrian great Marcel Hirscher. Ryding had two more podium results, most recently in Adelboden a year ago, before finally clinching his maiden win. 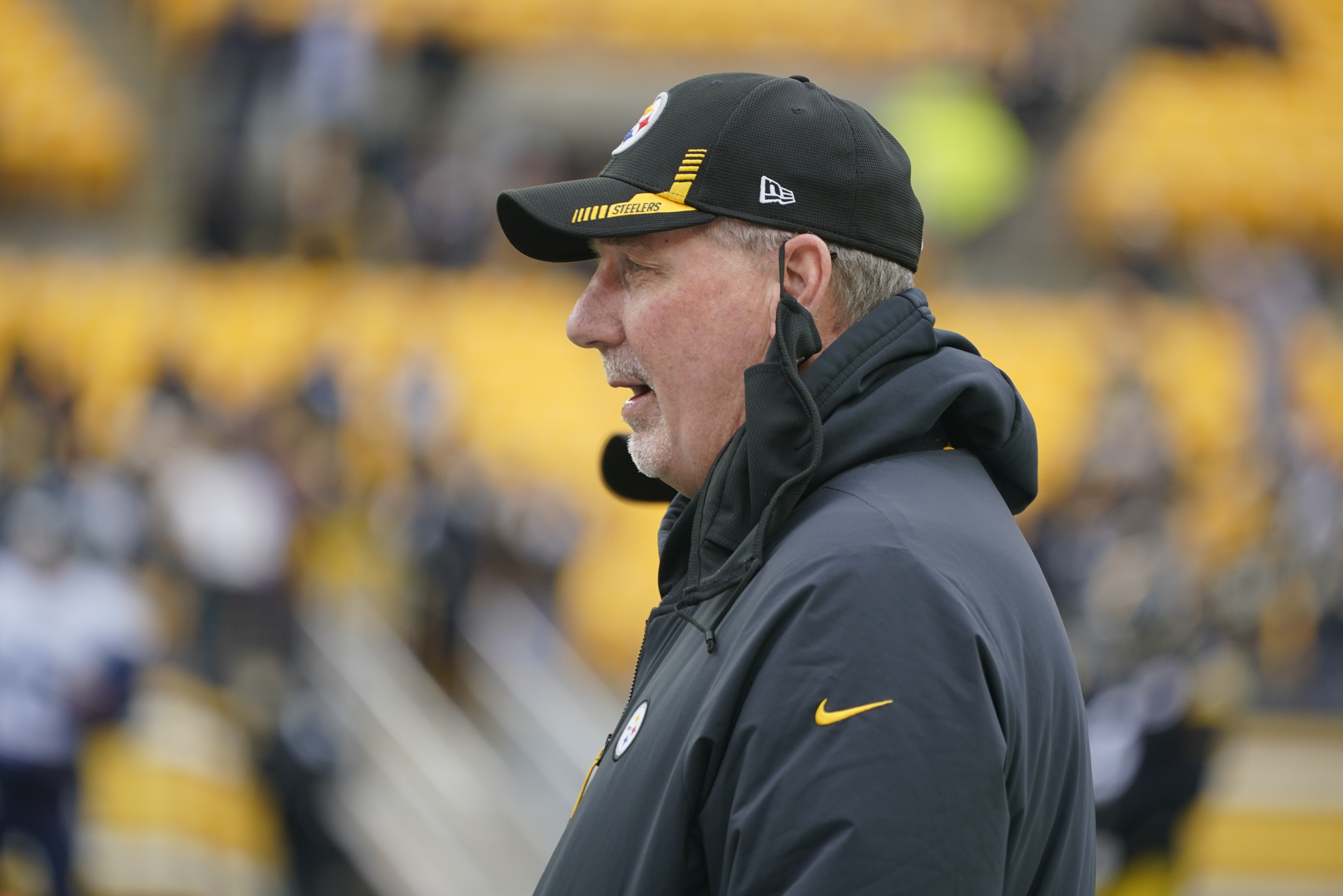 FILE - Pittsburgh Steelers defensive coordinator Keith Butler watches players warm up for an NFL football game against the Tennessee Titans, Dec. 19, 2021, in Pittsburgh. Butler retired on Saturday, Jan. 22, less than a week after his 19th season with the team ended in a blowout playoff loss to Kansas City. The 65-year-old Butler, who spent 10 seasons as a linebacker for the Seattle Seahawks in the 1970s and 80s before getting into coaching, helped the Steelers win two Super Bowls and reach another during his nearly two decades with the team. (AP Photo/Gene J. Puskar, File)