Sigh of relief: Hogs open early lead, hang on in OT against Aggies 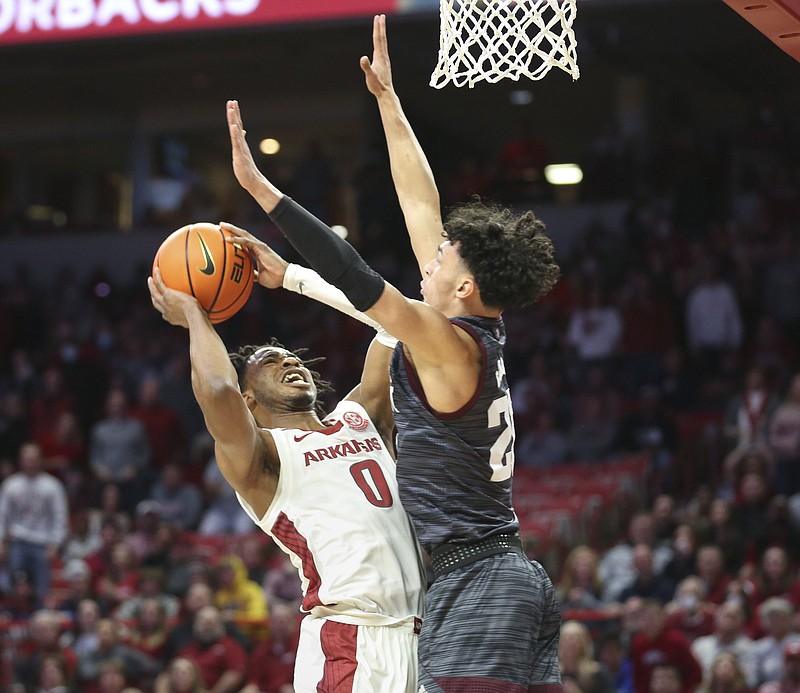 FAYETTEVILLE - The Arkansas Razorbacks got their payback against Texas A&M.

But it took working overtime.

The Razorbacks held on to beat Aggies 76-73 in overtime when Hassan Diarra's three-point attempt barely grazed the front of the basket as time expired.

"I thought we had a lot of guys make big plays," Razorbacks Coach Eric Musselman said.

Among the biggest plays was Davonte "Devo" Davis being able to avoid being fouled when he caught the inbound pass from under the Razorbacks' basket with 5.5 seconds left in overtime, then got the ball ahead to Stanley Umude for a dunk that gave Arkansas a 76-73 lead with 0.9 seconds left.

Umude, a senior guard who had 15 points and 7 rebounds in 43 minutes, said that when he caught the long pass, he didn't think about holding the ball to try to run out the clock or make the Aggies foul him.

"Devo got me the ball at a good angle," Umude said. "I knew I was going to be able to get [to] the rim and at least draw a foul. I had a good step on the guy and just took off."

Musselman agreed with how Umude played it.

"He might have been able to eat up a second or two, but they still would have had a little bit of time on the clock," Musselman said. "So I think he made the right read.

"There's times where we're on the bench trying to back it out. But this was one particular time I thought Devo made a great read, Stan made a good decision and you take the two points. Especially with that little amount of time left."

Jaylin Williams, who inbounded the ball to Davis, said he wasn't surprised the Aggies weren't able to foul him.

"Devo is fast," Williams said. "I knew they weren't going to catch him."

The Razorbacks hit 4 of 5 shots in overtime, including a jump shot by Williams with 10.7 seconds left in overtime to give Arkansas a 74-71 lead with the shot clock running down.

Chris Lykes nearly turned the ball over and was falling down when he got it to Williams.

"I just had confidence, took the shot and it went in."

Senior guard JD Notae led the Razorbacks with 17 points, but he fouled out with 1:04 left in regulation.

"You don't have to watch us too long to know we run a lot of things through [Notae] and with him," Musselman said. "Didn't particularly have good play in regulation [without] him, and so when it went into overtime it was, 'Hey, forget anything that happened in the first 40 minutes. We've got five minutes to play, and the one thing we've got to hang our hat on is we've got to defend at the same level we have been,' because we're defending at a level that's really elite right now.

"I knew offensively it might not look pretty, but I thought defensively we were pretty doggone good for an entire game and in overtime as well."

Texas A&M freshman guard Wade Taylor, who scored a game-high 25 points, was fouled by Davis with 5.5 seconds left in overtime and hit two free throws to cut Arkansas' lead to 74-73.

"I thought Taylor, as a freshman, had an incredible game," Musselman said.

The Aggies took their first lead of the game, 66-64 with 4:17 left in overtime, when Tyrece Radford stole the ball from Lykes and passed to Quenton Jackson for a layup.

Arkansas senior forward Au'Diese Toney, who had 12 points, hit two free throws to tie it at 66-66.

Taylor then had a missed three-pointer and Jaylin Williams hit a jumper to put the Razorbacks ahead 71-68.

The game went to overtime after Texas A&M tied it 64-64 on Diarra's three-point basket with 9.1 seconds left in regulation. It was his only basket of the game.

The Razorbacks then couldn't get a shot off and Trey Wade turned the ball over with 1.2 seconds left.

Jaylin Williams stole the inbound pass and there still was 1.2 seconds on the clock when Arkansas called timeout.

The Aggies forced the Razorbacks to inbound the ball in the backcourt and Umude's heave from 70 feet missed the basket, sending the game to overtime

Texas A&M, which got 13 points from Jackson, rallied after falling behind 20-4 to start the game.

"Top five arena, environment, in the country. Did a lot of good things. Didn't start well. Hard to play from behind against a team that's top 20 in the country with a coach that has a 75% winning percentage with incredibly talented players.

"But hold our guys in the highest regard and believe in them."

Umude, a transfer from South Dakota, said the Razorbacks feed off the raucous home crowd.

"It's crazy playing in this environment," Umude said. "This is the environment that I pictured myself playing in and so it's a dream come true.

"Playing in front of all those fans ,it just gives you a different edge and it just really helps us in the end."

KEY STAT The Razorbacks hit 4 of 5 shots in overtime 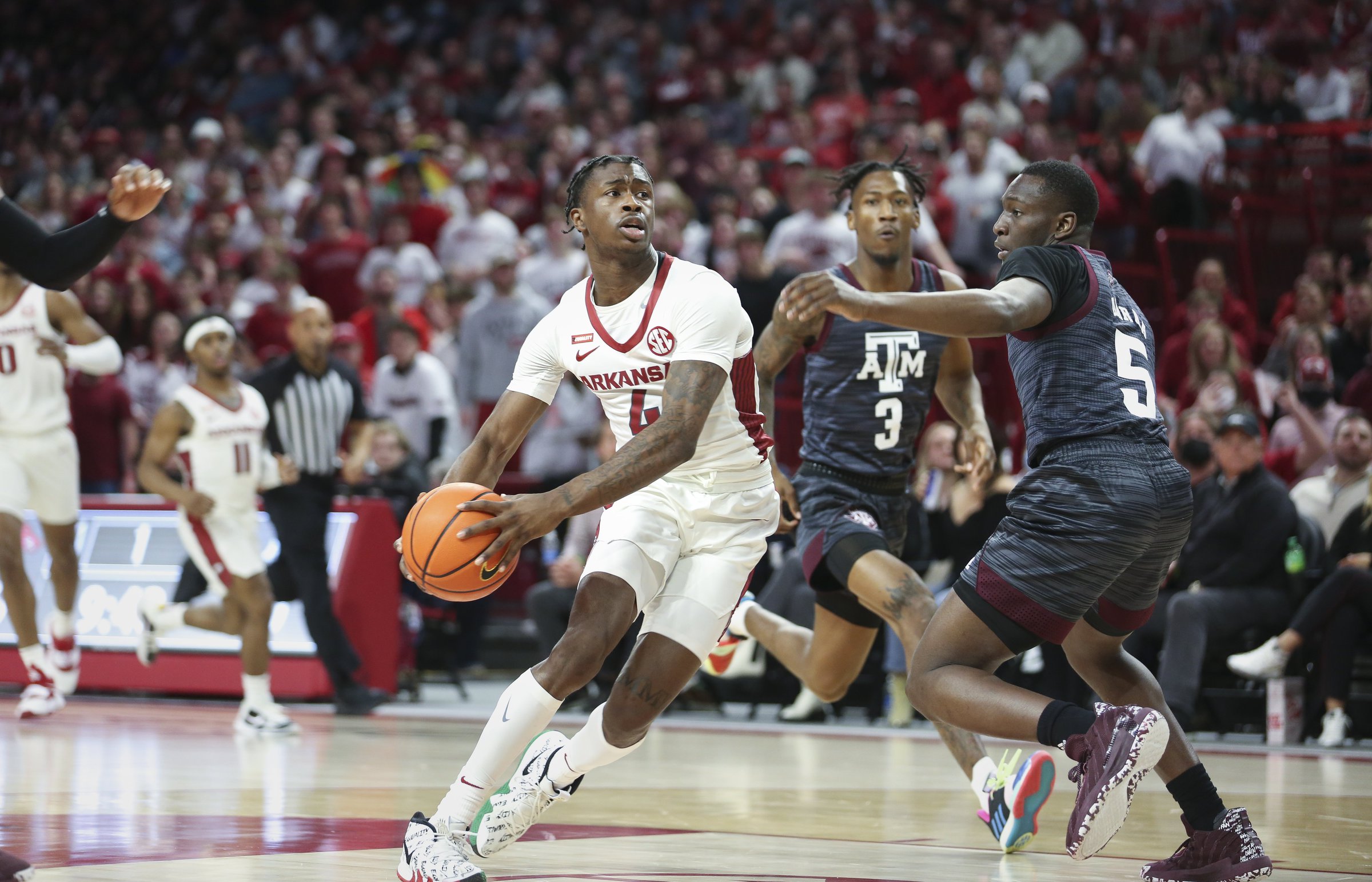