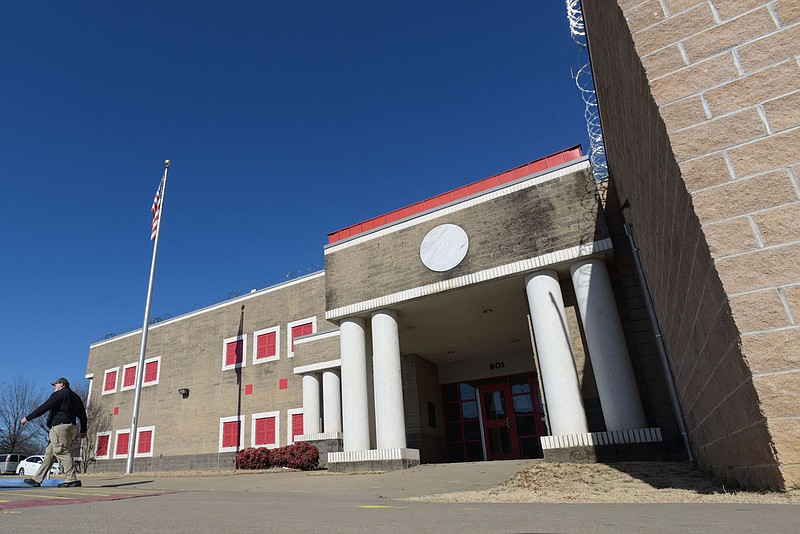 An employee walks near the entrance of the Sebastian County Detention Center on Friday in Fort Smith. Due to staff absences from Covid-19, the Sheriff's Office this week used its patrol and courts divisions to help run the jail. Go tonwaonline.com/220123Daily/ for today's photo gallery. (NWA Democrat-Gazette/Hank Layton)

FORT SMITH -- Western Arkansas sheriffs reported having challenges in their jails recently in the wake of the surge of the omicron variant of covid-19 in the state.

Sebastian County Sheriff Hobe Runion estimated about 35-40% of staff at the jail in Fort Smith were out due to the virus as of Tuesday afternoon. This included detention deputies and civilian staff, as well as food service and medical personnel employed by companies the sheriff's office contracts to provide these services.

This doesn't include sheriff's office personnel who work outside the jail who were out that day.

Runion said the sheriff's office is using its patrol and courts divisions to help run the jail. The department is going to pay these employees overtime to do this with the hope the omicron surge will peak "fairly quickly."

"At the same time, if we get to that point where we cannot cover the staff of the jail effectively, that's when I'll have to say, 'If you are not sick, I need you to put a mask on and come to work,'" Runion said. "I want to emphasize we have not got to that point yet, but it's obviously a discussion we've been having."

Runion was unable to provide a number of inmates infected with covid-19 Tuesday. If an inmate were infected or exposed to the virus, they would be quarantined in their current cell due to the jail not having any empty cells or pods. The 356-bed facility has had an ongoing history of crowding.

Jimmy Damante, sheriff for Crawford County, likewise said Tuesday staff at the jail in Van Buren was down to a "skeleton crew" due to covid-19. He has also been using patrol deputies to help fill the resulting vacancies, although he said it hasn't created an issue for the sheriff's office yet.

"I have 10 or 12 or 14 total employees throughout the whole department that have tested positive," Damante said Tuesday. "Now, some of them will be coming back because they tested positive several days ago and their quarantine time is up, so I'll be getting the bulk of those back in, I think, one or two days this week."

However, a testing done the previous week revealed 115 out of 288 inmates at the jail were positive with covid-19, according to Damante. He went on to say every pod in the facility has at least a couple of people who have the virus.

Damante said it's been very difficult to segregate inmates who've tested positive from those who haven't.

"New intakes go to a certain pod to try to segregate them for the first couple of days to make sure that they're not infected before we put them in with others," Damante said. "It's kind of a chess game moving people around, trying to keep as tight a control as we can on it."

In western Arkansas, a 30-day mask mandate was enacted for the Fort Smith School District on Jan. 10 in response to the ongoing increase in covid-19 cases in the state, specifically the omicron variant. The University of Arkansas-Fort Smith also opted to move its instruction and operations from in-person to remote delivery for the same reason Jan. 14, although it will return to in-person Monday.

The Sebastian County sheriff's office is following current guidelines from the Centers for Disease Control and Prevention and is trying to minimize all movement of inmates at the jail to reduce the risk of infection, Runion said. Runion also implemented a mask mandate for sheriff's office staff working in an enclosed area Tuesday.

Runion said he sent email to prosecutors, police departments and judges Tuesday, as well as his own staff, explaining the situation with the jail and suggesting they employ alternatives to sending certain offenders to the facility.

"Obviously, some people just have to go to jail and that will continue, but basically, what we said if there's a way that we can deal with this in a different manner, let's do it," Runion said. "If it's a misdemeanor that we can write a citation for, let's do it, but obviously, we have to be open."

Damante said in addition to segregating inmates, the Crawford County sheriff's office also has a mask mandate for staff at its 307-bed jail. It also disinfects the facility a couple of times per week, with inmates also cleaning the pods.

"We're going right along as we have in the past," Damante said. "The sheriff's office, and any law enforcement, doesn't ever get to shut down like any other businesses. That's probably our biggest thing. We can't shut down. We can't stop. We can't send everybody home and say, 'Take today off.'" 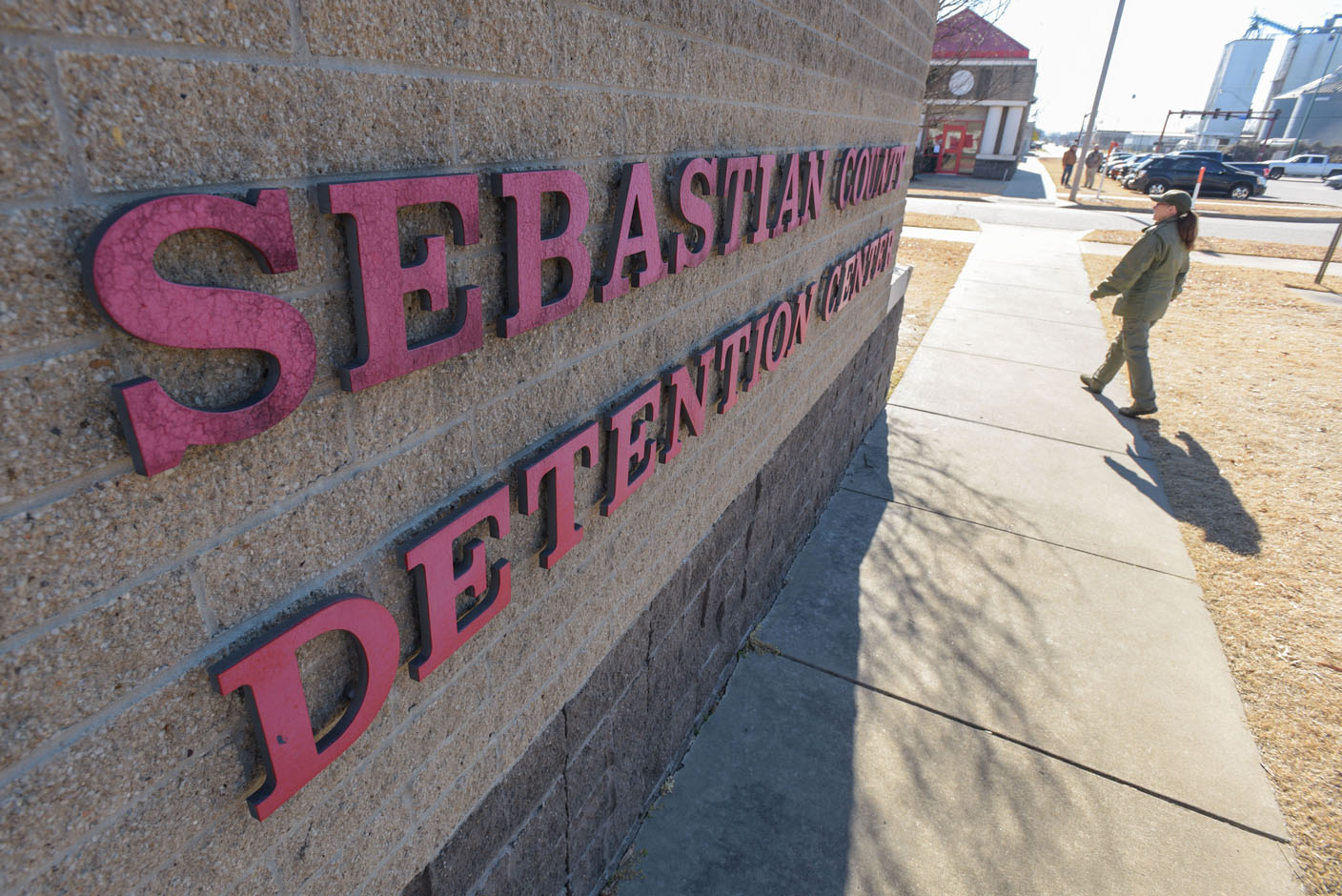 An employee walks near the entrance of the Sebastian County Detention Center on Friday in Fort Smith. Due to staff absences from covid-19, the Sheriff's Office this week used its patrol and courts divisions to help run the jail. Go to nwaonline.com/220123Daily/ for today's photo gallery. (NWA Democrat-Gazette/Hank Layton)