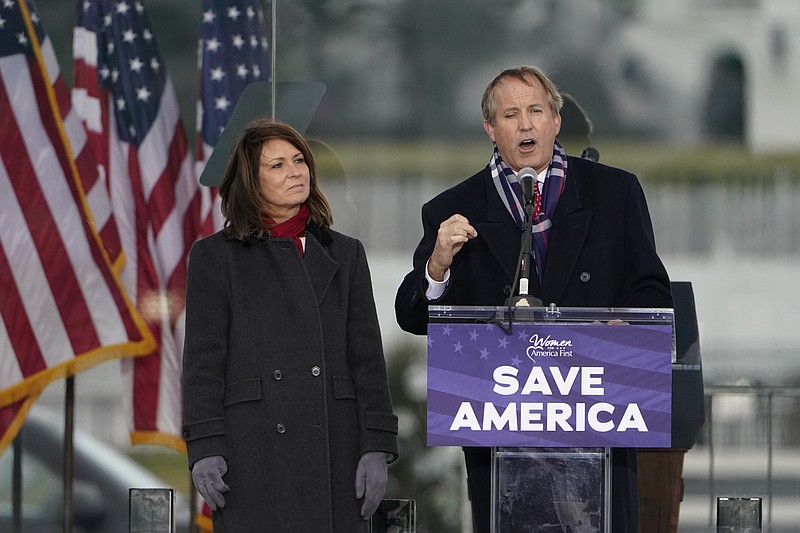 FILE - Texas Attorney General Ken Paxton speaks at a rally in support of President Donald Trump called the &quot;Save America Rally&quot; in Washington on Jan. 6, 2021. A district attorney says Paxton violated the state's open records laws by withholding or failing to retain his communications relating to his appearance at a pro-Trump rally that preceded the deadly riot at the U.S. Capitol last year.&#xa0;(AP Photo/Jacquelyn Martin, File)

AUSTIN, Texas -- Texas Attorney General Ken Paxton has rejected a prosecutor's demand for records of his appearance at a pro-Donald Trump rally that preceded the assault on the U.S. Capitol.

The Texas Tribune was the first to report about Paxton's refusal. A message to the district attorney's office seeking comment wasn't immediately returned.

Paxton and his wife, state Sen. Angela Paxton, appeared at the event in Washington, D.C., where the attorney general gave a speech touting his failed legal push to overturn Joe Biden's victory in the presidential election.

Earlier this month, top editors at five Texas newspapers -- the Austin American-Statesman, The Dallas Morning News, the Fort Worth Star-Telegram, the Houston Chronicle and the San Antonio Express-News -- filed a complaint asking the district attorney to investigate the allegations.

In 2020, eight of Paxton's top deputies accused him of bribery, abuse of office and other crimes in the service of a supporter, who employs a woman with whom the attorney general is alleged to have had an extra-marital affair. The FBI is investigating those allegations.

The attorney general has also spent most of his time in office under a separate felony indictment. He pleaded innocent in 2015 to three state securities fraud charges but is yet to face trial.