Virtual reality: Getting married in the metaverse 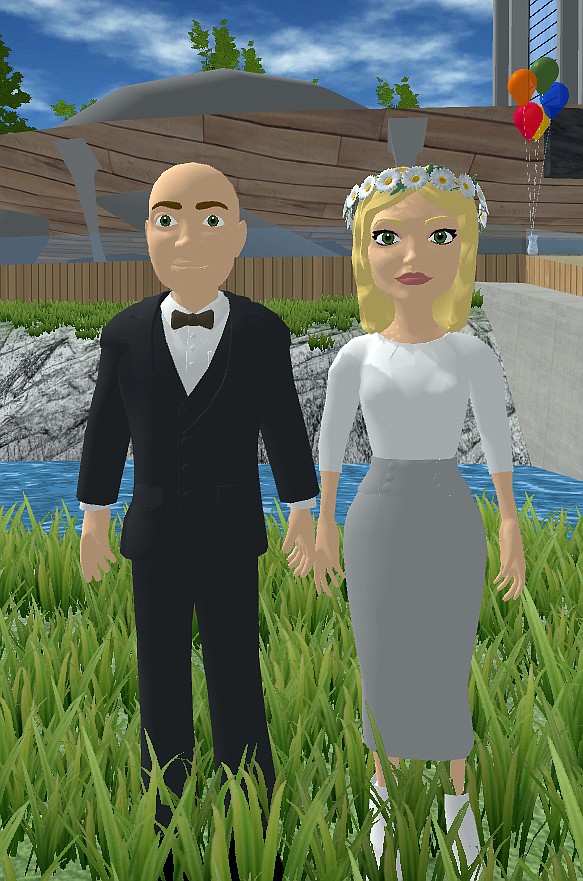 For their wedding in the metaverse, Dave and Traci Gagnon had avatars created that were based on personal photos and the clothes they wore to their in-person ceremony. (Traci Gagnon via The New York Times) &#x460;NO SALES; FOR EDITORIAL USE ONLY WITH NYT STORY METAVERSE WEDDING BY STEVEN KURUTZ FOR JAN. 18, 2022. ALL OTHER USE PROHIBITED.

Traci and Dave Gagnon met in the cloud, so it only made sense that their wedding took place in it. On Labor Day weekend, the couple -- or rather, their digital avatars -- held a ceremony staged by Virbela, a company that builds virtual environments for work, learning and events.

Traci Gagnon's avatar was walked down the aisle by the avatar of her close friend. Dave Gagnon's avatar watched as his buddy's avatar ambled up to the stage and delivered a toast. And 7-year-old twin avatars (the ring bearer and flower girl) danced at the reception.

How the immersive virtual world known as the metaverse, which few of us understand, will change the traditional wedding is, at the moment, anyone's guess. But the possibilities of having an event unfettered by the bounds of reality are interesting enough to consider.

Because of the covid-19 pandemic, technology is already being incorporated into ceremonies more than ever. Zoom weddings have taken place, and some in-person ceremonies now feature a livestream component for guests who cannot be there. Last year, a couple whose wedding was canceled because of the pandemic staged a (nonlegal) ceremony within Animal Crossing, a popular video game.

Like a ceremony within a video game, any weddings that occur solely in the metaverse are currently not legal. (Even virtual weddings by video conference, which many states allowed during the height of the pandemic shutdowns, have since been outlawed in New York state and elsewhere.) Still, the metaverse will take these virtual celebrations much, much further, experts say, and offer almost boundless possibilities to couples.

"There are no limitations," said Sandy Hammer, a founder of Allseated, which creates digital planning tools for weddings. The company is investing in the metaverse by creating virtual versions of real-world event spaces like the Plaza Hotel in New York. "If you really want to do something different, in the metaverse you might as well let your creativity go wild."

Think guest lists that number in the thousands. Gift registries that feature NFTs, or nonfungible tokens. Maybe even destination weddings in space.

"They're going to take their friends on a space rocket," Hammer said, adding that she envisions wedding parties globe-trotting virtually. "A bride can transport her guests into the metaverse: 'I want my morning session to be in Italy, my evening session to be in Paris.'"

Nathalie Cadet-James, a wedding planner and designer based in Miami, is approaching the metaverse with "a beginner's mind of excitement," and trying to anticipate how her role will change. "I think my role might be more like a producer or film director," Cadet-James said. "I could create a set that I've enhanced. Flowers might come out of the ground as you're walking into the space. I would add whimsy and fantasy to it -- because we could."

Of course, this would require the skills of a software engineer, a role not in any typical wedding budget at the moment.

The Gagnons had a hybrid wedding of sorts. The two were married in person Sept. 4 at Atkinson Resort & Country Club in New Hampshire, where they live, in a ceremony officiated by David Oleary, a friend and colleague of theirs ordained by the Universal Life Church, while simultaneously hosting a virtual ceremony in Virbela.

They livestreamed their nuptials for those who could not be there in person. Guests of the virtual ceremony attended via computer, which required downloading software and then creating an avatar.

Traci Gagnon, 52, and her husband, 60, work as agents at eXp Realty. The brokerage has embraced virtual work and the metaverse and is part of eXp World Holdings, which also owns Virbela.

MET AT A COMPANY EVENT

Before the couple met in person, their avatars met at a company event in Las Vegas in 2015. And when they announced their engagement in 2019, their co-workers offered to remake Virbela's cloud campus into a wedding venue, free of charge. (Traci Gagnon estimated that it would have cost $30,000 had they paid for it; representatives for Virbela declined to disclose a price for the event.)

The Gagnons sent pictures of themselves and their wedding decor to Virbela's events team and software engineers, who incorporated personalized details like bird of paradise flowers and images of their in-person venue into the virtual ceremony.

"They were able to take my wedding dress and customize it, and take a little flower halo and put it on my hair," Traci Gagnon said.

Patrick Perry, director of event sales and partnerships for Virbela, said the cost of holding an event in the metaverse "depends on what you want," adding, "if there's an engineer building out an MGM ballroom or something of that nature, then the cost goes up," ranging from a few thousand dollars to well over $10,000.

But, Perry said, as the metaverse gets built out, "there's going to be more plug and play assets." Wedding couples will be able to select from pre-designed venues, flowers, tablescapes, dresses, musical entertainment and other elements.

Virbela was designed to be an immersive platform for organizations to host events and build a sense of community in the metaverse. But users have asked the company to host graduations, bar mitzvahs, weddings and other celebrations. Lately, Perry said, Virbela has started to explore the wedding market and is in the planning stages with a few couples.

Hammer said Allseated has not yet worked with a couple interested in having a wedding that only takes place in the metaverse. In addition to the legality of such a ceremony, a hybrid event like the Gagnons' is "much more in-demand and realistic," she said, "because couples want both in-person and virtual experiences."

THE CONNECTION IT OFFERED

For Traci Gagnon, who hired two videographers, one to capture the in-person event and another to simulcast the ceremony to the cloud, the whole point of the metaverse element was the connection it offered.

Her maid of honor, who is ill, was still able to walk her down the aisle, if virtually. And Dave Gagnon's friend, who was unable to attend because his wife has pre-existing health conditions, could deliver his toast. The experience of moving through a virtual world as an avatar -- a kind of idealized version of yourself -- creates a more immersive, emotionally satisfying experience than Zoom, Traci Gagnon said.

"There is a different level of connection" with the metaverse, she said.

Being a metaverse bride had other benefits, too. 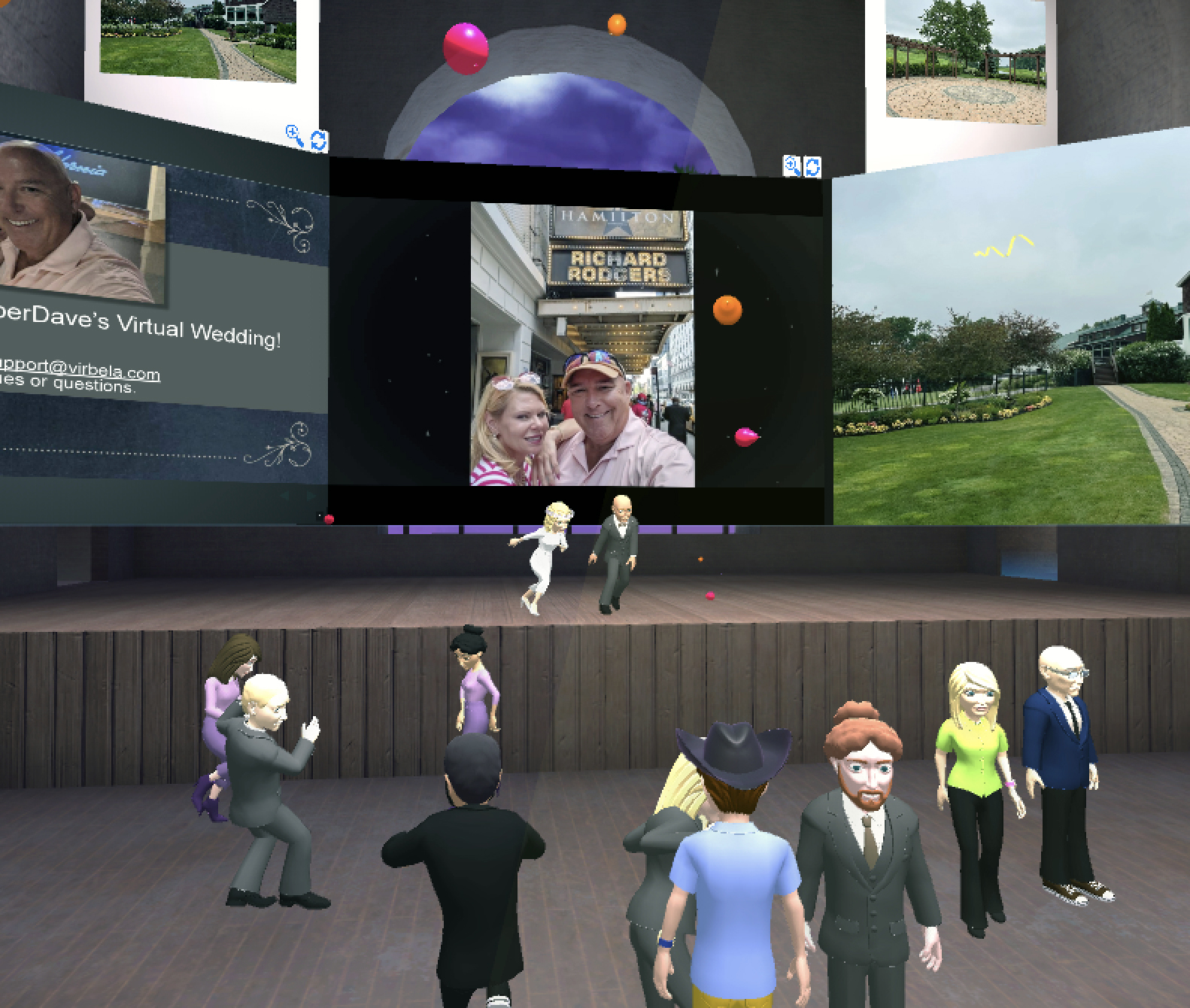 The events team and software engineers at Virbela, which staged the wedding of Dave and Traci Gagnon in the metaverse,ʩncorporated personalized details and images of their in-person wedding venue into the virtual ceremony.ʠ (Traci Gagnon via The New York Times) ѠNO SALES; FOR EDITORIAL USE ONLY WITH NYT STORY METAVERSE WEDDING BY STEVEN KURUTZ FOR JAN. 18, 2022. ALL OTHER USE PROHIBITED.

Print Headline: Virtual reality: Getting married in the metaverse