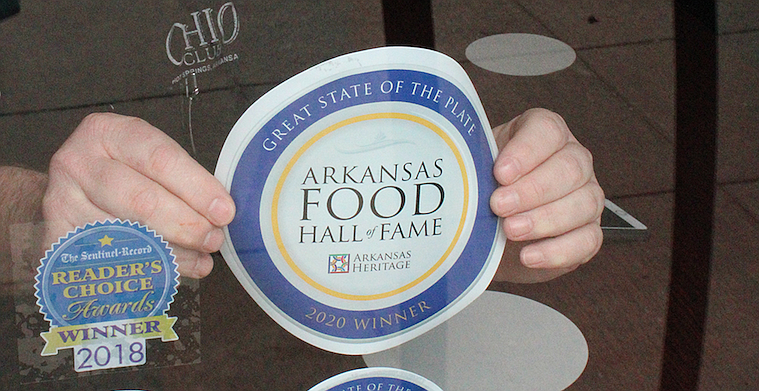 FILE — The "Burger Chef," Michael Dampier, puts a sticker on the window of the Ohio Club in Hot Springs that shows they won the People's Choice Award at the 2020 Arkansas Food Hall of Fame induction ceremony in this undated file photo. (The Sentinel-Record/Tanner Newton)

A panel of Arkansas historians, chefs, foodies and food authors has chosen, from more than 2,000 submissions from all 75 Arkansas counties, the finalists  for the 2022 class of the Arkansas Food Hall of Fame in four categories:

Proprietor of the Year

Gone But Not Forgotten

● James at the Mill

The winner of the People’s Choice Award, based on the number of nominations for a particular restaurant, will be announced during a hybrid induction ceremony, Feb. 7 at the Ron Robinson Theater, 100 River Market Ave., Little Rock, at which the winners of the other categories will be revealed.

Attend virtually or in-person; tickets are $20. Visit ArkFoodHOF.com, where all nominees and finalists will be listed.