Bella Vista traffic drops with new stretch of I-49 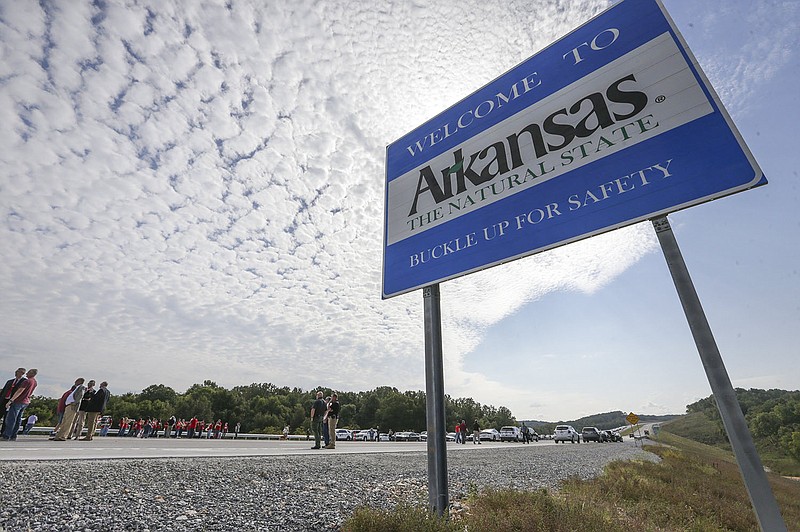 Opening the new portion of Interstate 49 appears to be having the desired effect in Bella Vista, based on before-and-after traffic counts by the Arkansas Department of Transportation.

Significant travel volume changes have occurred since the completion and opening of I-49/Bella Vista Bypass on Oct. 1, including a reduction in traffic on U.S. 71/Bella Vista Way, especially large trucks. Traffic, including trucks, has increased on the interstate itself and doubled on Arkansas 72 in Gravette, west of the I-49.

"Before it was open, on existing U.S. 71, 22,000 [vehicles per day] at the state line. After it was open, 12,000," said Tim Conklin, assistant director at the Northwest Arkansas Regional Planning Commission. At the state line on the new section of I-49 in Missouri, 13,000 vehicles a day, he said.

Truck traffic on that stretch increased from 810 to 4,510, on average.

"I would think that those in Bella Vista must notice minus-4,000 trucks," Conklin said.

Dan Weese, city engineer in Bella Vista, lives near U.S. 71 and said big truck traffic has decreased from 4,310 to 180 a day near his home.

"Absolutely. No more Jake braking in the middle of the night at the stoplight below my house," Weese said.

Mayor Peter Christie said the change has been dramatic but positive for the city.

"The bypass lived up to its name, it drew the traffic off," Christie said. "It certainly is a three-way win for commuters, truckers and the local residents."

In addition to being noticeably quieter and safer for residents and faster for commuters, truckers no longer have to deal with all the stopping and starting between the traffic lights that backed up traffic in the past, Christie said.

Christie noted most of the truckers, commuters and people traveling through the city before weren't really stopping at local businesses anyway, but local merchants along the road have actually seen their sales increase.

"They said we're seeing people that we haven't seen in years and they're saying now that the big trucks and the heavy traffic are gone, they feel quite happy coming back down 71 to purchase," Christie said. "I was pleasantly surprised that there was an uptick."

While much of the traffic is now passing through the area on I-49, Arkansas 72 just west of I-49 in Gravette showed significant increases of both cars and big trucks since the opening. Before, the location saw 7,000 vehicles a day, 650 being trucks. After, the same location averaged 9,200 vehicles a day, which included 1,240 trucks.

Mayor Kurt Maddox said the change has caused some traffic issues but has been good for business in his city.

"We think it's gone up even more than that initial check," Maddox said. "But, that's something, as a city, we've been preparing for for several years now. As far as state highways go, I don't think the state was prepared for that."

Maddox said traffic has increased significantly from Siloam Springs to Gravette on Arkansas 59 and Arkansas 72. That may be because it's about a 24-mile savings compared with taking U.S. 412 to Springdale and then going north on I-49.

"That's a pretty huge difference," Maddox said. "That's caused some issues with truck traffic and turning but we're working with the state, trying to get that figured out."

Maddox said traffic has been backing up at Arkansas 59 and Arkansas 72.

"Semis have a hard time turning right there so that is our biggest issue, turning right on 72," Maddox said. "The road needs to be wider or a right turn lane added for those trucks to be able to turn and get on out to the bypass."

Maddox said he's not sure truckers are stopping at local businesses but others are.

"I talked to one of our food truck vendors in town and he had two or three record weeks within a couple of weeks of the bypass opening," Maddox said. "So, business-wise, it's just been a great deal for Gravette. Traffic-wise and road-wise, we're working with the state a little more on that and hope to get that corrected in the near future."