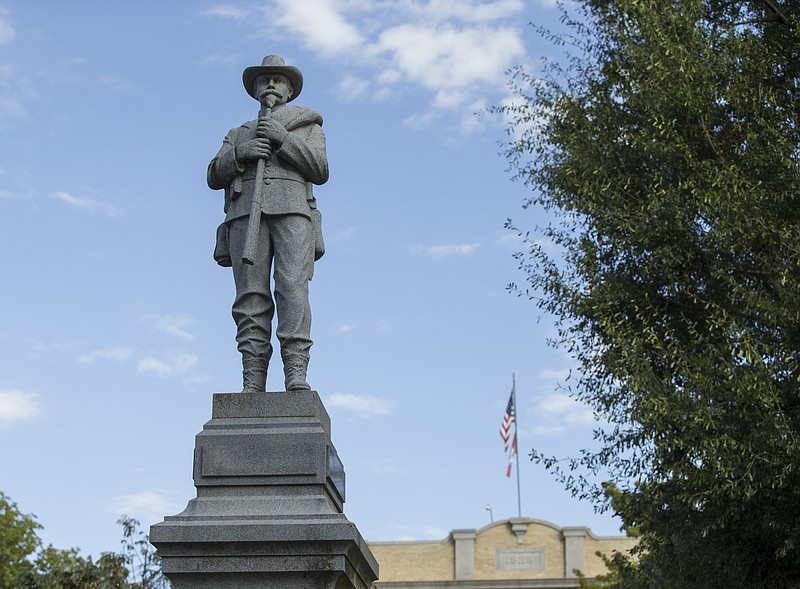 Bentonville's Confederate soldier monument is shown in the City Square in this Sept. 25, 2019, file photo. The statue has since been removed for restoration and eventual relocation to a private park. State Sen. Mark Johnson, R-Ferndale, is the lead sponsor of a law that prohibits removal, relocation, alteration or renaming of a memorial that is on public property. He says the law, approved last year, would have allowed for the removal of the Bentonville statue if the entities involved petitioned for a waiver from the Arkansas History Commission. (NWA Democrat-Gazette file photo)

The state is taking comments on proposed rules resulting from a 2021 law that sets conditions before a memorial on public property can be moved or altered.

The Division of Arkansas Heritage of the state Department of Parks, Heritage and Tourism announced Tuesday that it was accepting public comments on the proposed rules for the Arkansas State Capitol and Historical Capitol Monument Protection Act through Feb. 17.

The act, approved in April, prohibits removal, relocation, alteration or renaming of a memorial that is on public property.

The act also requires governmental entities to register historical monuments erected after April 28, 2021, the act's effective date, with the History Commission. The commission is part of the Division of Arkansas Heritage.

David Ware, director of Arkansas State Archives, a part of the Division of Arkansas Heritage, serves as the secretary of the Arkansas History Commission.

Ware said the commission will evaluate applications from governmental entities seeking term or perpetual waivers from the act's provisions prohibiting alteration or removal of historical monuments.

"This last phrase includes statues, memorials, gravestone plaques, plaques or historic flag displays located on public property and installed, erected for, or named or dedicated in honor of a historical person, historical event, public service organization, firefighter, police officer, military organization, or military unit," Ware said in an email. "As I understand it, applications will be reviewed by ADPHT staff, who will offer their suggestions to the Commission."

Jeff LeMaster, spokesman for the Department of Parks, Heritage and Tourism, said in an email that a public hearing about the proposed rules will be held Feb. 11 during which the public may provide in-person, written or verbal comments.

"There is no limitation on the number of in-person commenters, although the Division of Arkansas Heritage will have procedures in place to provide a safe venue for the public hearing," he said.

Sen. Mark Johnson, R-Ferndale, the bill's lead sponsor, said he wasn't aware that the rules were being made public until the Arkansas Democrat-Gazette contacted him.

Johnson said he had sent a letter to Stacy Hurst, secretary of the Department of Parks, Heritage and Tourism, earlier this month questioning the amount of time that had passed for the rules to become public.

"This went into effect on April 7 of last year, and it had a clause that they would present the rules to Legislative Council by Jan. 1 of 2022, and they just ignored the deadline," he said. "I wrote a letter to the secretary that deadlines mean things, but I never received a response for it. I am glad they are moving on it even though they are late and ignoring me."

Attempts to contact Hurst were unsuccessful as of Friday afternoon.

Johnson said he hopes the public comments go beyond people complaining about a law that is already in place.

"The time for people who want to tear down any statue to comment on the situation was during the [2021 regular legislative] session when the bill was on the floor and in committees," he said. "It's done. It's the law. The rules are just details of implementing the law. If they want to come and vent, we have already dealt with that issue."

Johnson said he is hopeful the comments are more on the basis of refining the details of implementing the law.

"In most cases the purpose of these public rules is to deal with issues and to provide technical advice to agencies," he said. "They say we know what you are trying to do, but this tweak will make the process better. That is the reason why we have public comments on rules."

Johnson said he first worked on the bill two years ago.

"I sponsored a different bill in 2019 and failed to get it passed," he said. "The first time around I cast too wide of a net. I tried to fight back against the cancel culture and the tearing down of monuments and disrespecting our history. I had things like we couldn't change the names of streets. I recognized I had to be reasonable about this and focus on what we wanted to actually do."

Johnson said he worked with city-operated utilities to create rules for the bill that focused on technical issues like the moving of monuments when necessary to make repairs.

"For example if a water main bursts under a monument and you need to move it," he said. "We wanted to work on the language for this bill to make sure all our bases were covered."

Johnson said the bill requires governmental entities to register historical monuments erected after April 18 because it gives the History Commission the power to pick and choose which monuments receive protected designation.

"Let's say someone gets a granite rock the size of a basketball and writes profanity on it and places it in the courtyard as a statue. If the city wants to remove it, they can if it didn't get approval from the History Commission," he said. "We wanted to look down the road to anticipate the potential abuse of this act. We needed an entity to stipulate rules for all existing monuments and those who are being added to it, and we deemed the History Commission as that entity."

Johnson said if a city wants to relocate a statute it will have to still get approval from the History Commission.

"Let's cite a real example in Bentonville. They had a generic Confederate soldier statue, and the city and other entities got together and relocated it to park," he said. "That type of plan now could be submitted to the History Commission, and more or less it could be worked and comprised so that a waiver could be done."

Johnson said what he wants to avoid is cities using this process to completely remove statues from being displayed.

"There was a case in another state where the city forced a statue to be removed and someone was willing to buy it but they weren't allowed to display the statue," he said. "That is part of the cancel culture we are trying to stop. This is not a blank check for municipalities to do what they want. You can get eight people one year and they can decide to tear down the statue of anything. We got to respect people's work. We aren't going to destroy our history for trendy destructive forces because we don't like what a person stood for."

Johnson said in his mind all of the people honored have flaws.

"These are human beings with virtues and flaws, and we commemorate the things they did in their life," he said. "That is what history is about. History is important, and we have seen in recent years that people have a narrow mind of what is history and want to destroy the things that don't fit."

Johnson used the example of the Islamic State destroying ancient artifacts in Syria and Iraq as what he admitted was an "extreme" example of what has been happening in America.

"It's not so far removed from what they want to do in the United States," he said. "That is not Arkansas values. For example at the Governor's Mansion there is a bust of Clinton. He had his flaws and virtues, but he is a historical figure in this state who holds significance."

Ware said as far as he is aware, the act gives the History Commission sole duty for evaluating and either approving or rejecting applications for waivers.

Johnson agreed, saying he technically will have zero opinion on the decisions made by the History Commission.

"Even though I am the sponsor of the bill and I hope they at least listen to my opinions, I am not the arbiter of the language when it comes to the rules," he said. "The only thing that we want to make sure is that when the rules are brought out, they aren't contradicting the intent of the law."

Johnson said this means he doesn't want organizations petitioning the History Commission to remove statues without a justifiable reason like repairs.

Johnson said relocating a monument must be in a manner to preserve and maintain it.

"For example, if a highway is getting widened and the monument needs to be slightly moved or if a monument needs to be repaired and put back," he said. "These are the type of things that we anticipated. This does not give any kind of authority to the History Commission or the Heritage Division to overturn the law."

"Some people think they can tear it down if they get a waiver from the History Commission, and I can tell you that is not the case," he said.