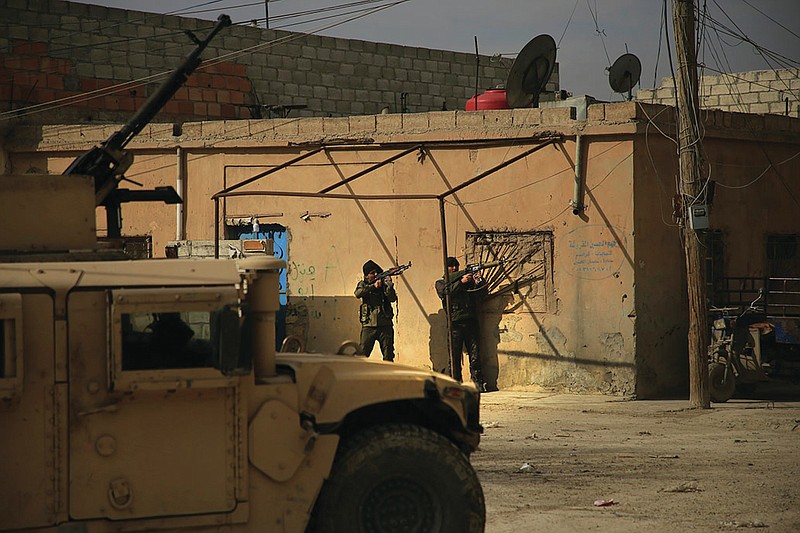 A U.S.-backed force in Syria said Sunday that it was still fighting to regain full control of the country's largest prison for Islamic State suspects, as the extent of the losses in a three-day standoff became clearer.

Farhad Shami, a spokesman for the Syrian Democratic Forces, said at least 160 suspected militants and 27 members of the U.S.-backed force had been killed in the attack in the northeastern Syrian city of Hasakah. The attack began with two car bombs that sparked a prison break amid fierce fighting.

The numbers killed could not be independently verified.

U.S.-led coalition forces launched airstrikes as their Syrian allies battled to regain control of the area on the ground, the coalition said in a statement. Coalition forces used Hellfire missiles and larger munitions and strafing runs by Apache helicopters, a coalition official said.

The attack began Thursday night, as the two car bombs rocked Hasakah and scores of militants swarmed the prison complex.

Prisoners responded by beating their way out into the corridors, officials said, overpowering their guards and killing several, before pouring out into the freezing prison yard.

The Hasakah prison, once a school building, now houses roughly 3,000 prisoners, most of them captured in the final weeks of the battle to retake the final sliver of Islamic State territory.

Shami said Sunday that the Hasakah prison complex was mostly back under Syrian Democratic Forces control, but some prisoners remained holed up in the facility's north wing, where hundreds of children are jailed.

As night fell, human-rights groups expressed grave concern for the boys inside the cells. UNICEF said nearly 850 children, some as young as 12, were in danger. In an audio message shared with Human Rights Watch, a foreign child was heard pleading for assistance.

"There's no doctors here that can help," he said. "There's a lot of people dead in front of me."

Letta Tayler, a counterterrorism lead at Human Rights Watch, described the bloody standoff as an "entirely predictable and avoidable" consequence of countries outsourcing responsibility for their nationals.

The prison building has been badly damaged by car bombs and airstrikes, Syrian and coalition officials said.

"Detainees who did not participate in the attack will be secured, with more details to be announced as the SDF completes its operations in the area," Brennan said.

Researchers who monitor the Islamic State and similar armed groups say the region's Kurdish-led authority has done little to address the social and political ills that fueled its rise.

U.S. officials say some prisoners have taken on leadership roles among their cellmates, and continue to preach the fundamentalist group's ideology.

"Attacking the detention facility was a top ISIS priority for more than a year," said Ned Price, a State Department spokesman. The assault, he said, now highlights the "urgent need" for countries to repatriate, rehabilitate and, where appropriate, prosecute their nationals.

Information for this article was contributed by Mustafa al-Ali and Mustafa Salim of The Washington Post.