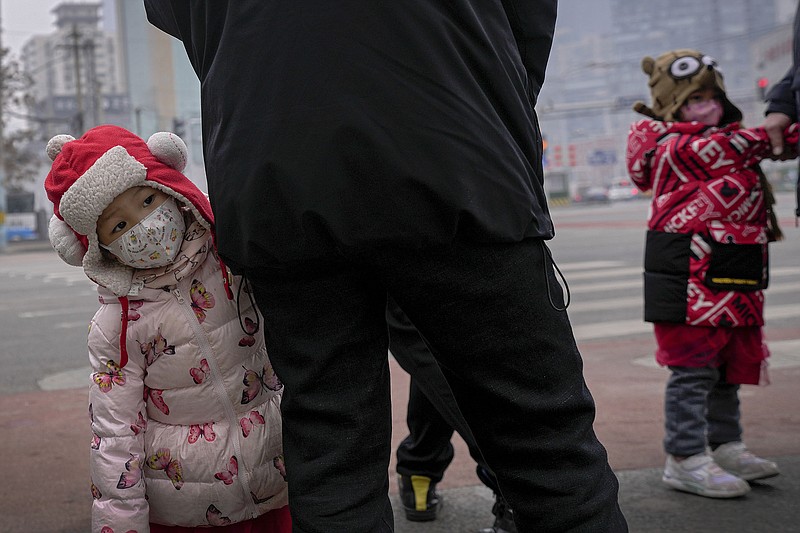 Children wearing face masks to help protect from the coronavirus stand with relatives waiting to cross a traffic intersection in the Central Business District of Beijing, Monday, Jan. 24, 2022. A fresh outbreak in Beijing has prompted authorities to test millions and impose new measures two weeks ahead of the opening of the Winter Olympics, even as Chinese officials on Monday lifted a monthlong lockdown on the northern city of Xi'an and its 13 million residents. (AP Photo/Andy Wong)

BEIJING -- Less than two weeks before the opening of the Winter Olympics, a few dozen covid-19 cases in Beijing have prompted authorities to test millions of people in the capital and extend that to anyone buying cold medicine.

The tough new measures came even as the city of Xi'an lifted a lockdown Monday that had isolated its 13 million people for a month.

Those found to be infected are sent to an isolation center or a hospital, depending on their condition.

Officials in Beijing undertook testing of the Fengtai district's 2 million residents, where the majority of the capital's 40 coronavirus cases since Jan. 15 have been found.

Beijing authorities have also announced that anyone who buys or who has bought fever, cough or certain other medicines in the past two weeks will have to take a covid-19 test within 72 hours.

The far-reaching precautions, despite a relatively low number of cases, illustrate the acute concern of government officials in the run-up to the Olympics, which open in Beijing on Feb. 4.

"The current epidemic prevention situation is still grim and complicated. And all departments across the city must act proactively and swiftly," Beijing city spokesperson Xu Hejian said.

"The overall situation is controllable," he added.

The ruling Communist Party has long pursued a "zero tolerance" covid-19 policy that has brought drastic efforts to stamp out any signs of new outbreaks. With the approach of the Olympics, that policy has become even stricter.

[Video not showing up above? Click here to watch » arkansasonline.com/125china/]

Overall, the number of reported new cases has been falling in China from more than 100 a day at the peak of the Xi'an outbreak to 18 on Sunday, six of which were in Beijing.

Ahead of the games, all participants will be tested every day and kept isolated from the public. Visiting athletes are required to be vaccinated or undergo a quarantine after arriving in China.

"I would estimate there is a good chance of at least one lockdown being implemented in Beijing in the coming month," he said.

The government told people in areas of Beijing deemed at high risk for infection not to leave the city. A number of nearby provinces reported cases linked to the outbreaks in the capital.

Beijing officials said an omicron cluster that infected six people had been brought under control. The Fengtai outbreak is driven by the delta variant and Chinese health officials say it is linked to imported frozen food.

Pang Xinghuo, deputy director of the Beijing Center for Disease Control, said gene sequencing of virus samples from the frozen food was consistent with that in 28 infected people.

Foreign experts are skeptical that covid-19 can spread easily from packaging.

Access to Xi'an was suspended Dec. 22 following a delta outbreak. More than 2,000 people were infected in the city, which is about 600 miles southwest of Beijing.

Other outbreaks have prompted the government to impose travel bans on a number of cities, including the port of Tianjin, about an hour from Beijing.

Information for this article was contributed by Huizhong Wu of The Associated Press.