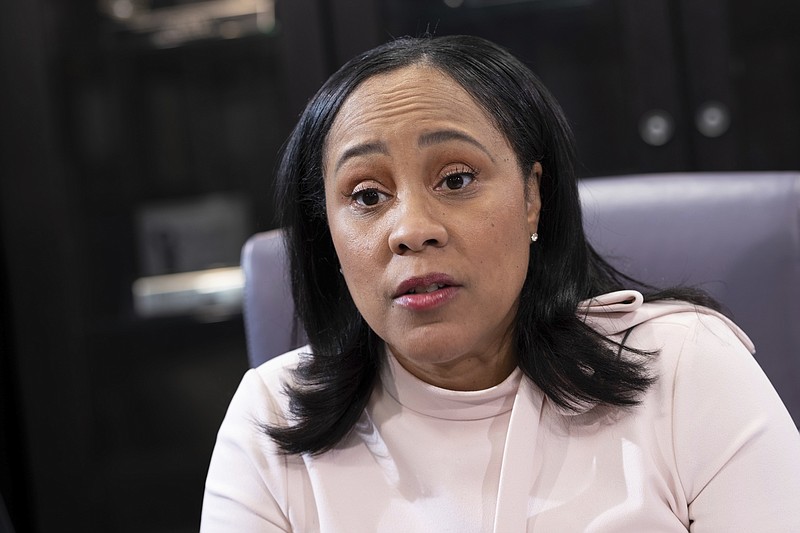 Fulton County Georgia District Attorney Fani Willis photographed in her office on Jan. 4, 2022. A request by the Georgia prosecutor who&#x2019;s investigating whether Donald Trump and others broke the law by trying to pressure Georgia officials to throw out Joe Biden&#x2019;s presidential election victory has been approved. Willis last week sent a letter to county superior court Chief Judge Christopher Brasher asking him to impanel a special grand jury. Brasher issued an order Monday, Jan. 24, 2022 saying the request was considered and approved by a majority of the superior court judges. (AP Photo/Ben Gray)

ATLANTA -- Judges have approved a request for a special grand jury by the Georgia prosecutor who's investigating whether former President Donald Trump and others broke the law by trying to pressure Georgia officials to throw out Joe Biden's presidential election victory.

Willis wrote in her letter to Brasher that her office "has received information indicating a reasonable probability that the State of Georgia's administration of elections in 2020, including the State's election of the President of the United States, was subject to possible criminal disruptions." She said her office has "opened an investigation into any coordinated attempts to unlawfully alter the outcome of the 2020 elections in this state."

The special grand jury "shall be authorized to investigate any and all facts and circumstances relating directly or indirectly to alleged violations of the laws of the State of Georgia, as set forth in the request of the District Attorney," the order says.

Willis has declined to speak about the specifics of her investigation, but in an interview with The Associated Press earlier this month she confirmed that its scope includes -- but is not limited to -- a Jan. 2, 2021, phone call between Trump and Georgia Secretary of State Brad Raffensperger, a November 2020 phone call between U.S. Sen. Lindsey Graham and Raffensperger, the abrupt resignation of the U.S. attorney on Jan. 4, 2021, in Atlanta, and comments made during December 2020 Georgia legislative committee hearings on the election.

In a statement last week, Trump called his call to Raffensperger "perfect" and said he did not say anything wrong. Graham, R-S.C., has also denied any wrongdoing.

Special grand juries, which are not used often in Georgia, can help in the investigation of complex matters. They do not have the power to return an indictment but can make recommendations to prosecutors on criminal prosecutions.

Willis wrote in her letter that the special grand jury is needed because it can serve for longer than a normal grand jury term, which is two months in Fulton County. It also would be able to focus on this investigation alone, allowing it to focus on the complex facts and circumstances.

Willis' investigation became public last February when she sent letters to top elected officials in Georgia instructing them to preserve any records related to the general election, particularly any evidence of attempts to influence election officials.

The probe includes "potential violations of Georgia law prohibiting the solicitation of election fraud, the making of false statements to state and local government bodies, conspiracy, racketeering, violation of oath of office and any involvement in violence or threats related to the election's administration," the letters said.