Kennedy draws fire for saying things worse than they were for Anne Frank by The Associated Press | January 25, 2022 at 4:22 a.m. 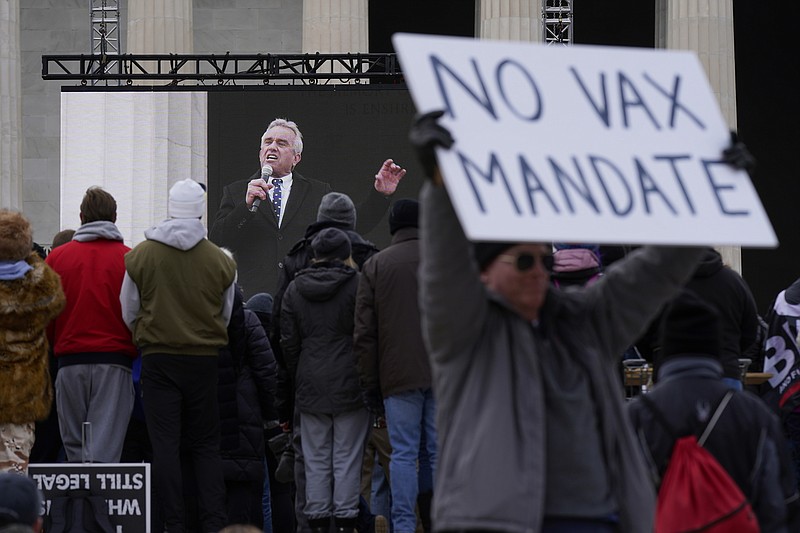 Robert F. Kennedy Jr., is broadcast on a large screen as he speaks during an anti-vaccine rally in front of the Lincoln Memorial in Washington, Sunday, Jan. 23, 2022. (AP Photo/Patrick Semansky)

"Making reckless comparisons to the Holocaust, the murder of six million Jews, for a political agenda is outrageous and deeply offensive. Those who carelessly invoke Anne Frank, the star badge, and the Nuremberg Trials exploit history and the consequences of hate," the U.S. Holocaust Memorial Museum said Monday in a statement posted to Twitter.

A spokesman said the museum made the statement in response to Kennedy's speech and other recent incidents of people invoking the Holocaust for political purposes. Frank was the teenager who died in a Nazi concentration camp after hiding with her family in a secret annex in an Amsterdam house for two years.

Jonathan Greenblatt, CEO of the Anti-Defamation League, wrote on Twitter that Kennedy invoking Frank's memory and the mass murder of Jews by the Nazis to make a comparison with the U.S. government "working to ensure the health of its citizens is deeply inaccurate, deeply offensive and deeply troubling. This must stop."

Among the others condemning the comment were Yad Vashem, the World Holocaust Remembrance Center, in Jerusalem, which said it "denigrates the memory of its victims and survivors."

During a Sunday rally in Washington organized by his anti-vaccine nonprofit group Children's Health Defense, Kennedy complained that people's rights were being violated by public health measures.

"Even in Hitler's Germany, you could cross the Alps to Switzerland. You could hide in an attic like Anne Frank did," said Kennedy, son of former U.S. Attorney General Robert F. Kennedy.

Kennedy Jr. went on to say that today, "the mechanisms are being put in place that will make it so none of us can run and none of us can hide," and complained about 5G, the newest generation of wireless communication networks, and about vaccine passports.

In an email sent Monday by a spokeswoman, Kennedy described his statement as "a factual observation that technology has given an arsenal of frightening instrumentalities to totalitarian elements."