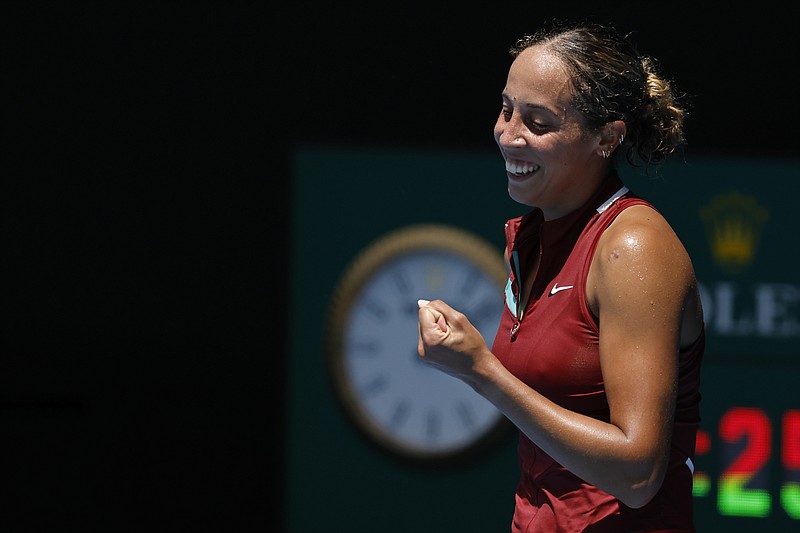 Madison Keys of the U.S. celebrates after defeating Barbora Krejcikova of the Czech Republic in their quarterfinal at the Australian Open tennis championships in Melbourne, Australia, Tuesday, Jan. 25, 2022.(AP Photo/Hamish Blair)

Her 6-3, 6-2 quarterfinal win over French Open champion Barbora Krejcikova earlier today was her 10th match win in a row and 11th of the new year. That includes five wins so far at Melbourne Park, five in winning the Adelaide International title 10 days ago and one at a Melbourne tournament in the first week of the season.

"I did everything I could to rest this offseason and focus on starting fresh and new ... starting from zero and not focusing on last year," Keys said in her on-court interview. "I think it's going well so far!"

Last week, Keys gave more details on how terrible 2021 was for her.

"I was just at a very high anxiety level all of the time," Keys said. "I wasn't sleeping as well. It felt like there was literally a weight on my chest just because I became so focused and obsessed with it that I wasn't enjoying really anything because it's all that I was thinking about."

Krejcikova took a medical timeout while trailing 5-2 in the first set from what might have been heat stress, and appeared to be lethargic at times during the 35-minute second set.

Keys will play either top-ranked Ash Barty or Jessica Pegula in the semifinals. Barty and Pegula were playing a night match on Rod Laver Arena.

In Alize Cornet's 17th trip to the Australia Open, her 63rd run at a Grand Slam, and two days after celebrating her 32nd birthday, Cornet finally qualified for the quarterfinals at one of the four major events in tennis. She dropped to her knees on the hard blue court, clasped her hands and took a few moments to let it sink in.

Cornet recovered after a second-set meltdown in the hot Melbourne sun on Monday to advance to the last eight at the Australian Open with a 6-4, 3-6, 6-4 win over two-time major champion Simona Halep.

Her victory over Halep, a former Wimbledon and French Open champion and runner-up in Australia, gave her a record for most appearances at a major before reaching the quarterfinals. Tamarine Tanasugarn previously held the mark at 45, set at Wimbledon in 2008.

"It's never too late to try again!" Cornet said in her on-court TV interview. "To be in my first quarterfinal. It's a dream come true.

"The journey goes on. I still can't believe it."

No. 115-ranked Kaia Kanepi had the same feeling, waiting until she was 36 to reach the quarterfinals in Australia and finally advancing when, after wasting four match points, she upset second-seeded Aryna Sabalenka 5-7, 6-2, 7-6 (7).

Kanepi's match had to be shifted off the main stadium court because of a late-finishing day program. Kanepi wrapped it up just after midnight on Margaret Court Arena to set up a showdown against 2020 French Open champion Iga Swiatek, who beat Sorana Cirstea 5-7, 6-3, 6-3.

"I thought I was going to lose it after the match points I had on my serve," said Kanepi, who had reached the quarterfinals twice at each of the other three majors. "It was difficult to come back.

It helped her that Sabalenka's service woes continued and she made 15 double-faults, giving her 56 for the tournament.

"Australian Open was the only quarterfinal of a Grand Slam I was missing," Kanepi said. "At my age, I didn't believe I would do it."

The second-ranked Medvedev is trying to become the first man in the Open era to win his second major singles title in the next Grand Slam event. The U.S. Open champion is now potentially three wins from achieving that.

Cressy's serve-and-volley style created some frustrations for Medvedev, who said late in the fourth set that this was the "most unlucky day I've ever had in my life." His luck changed quickly. After saving eight break-point chances in the set, Cressy was broken in that game and Medvedev served out at love. 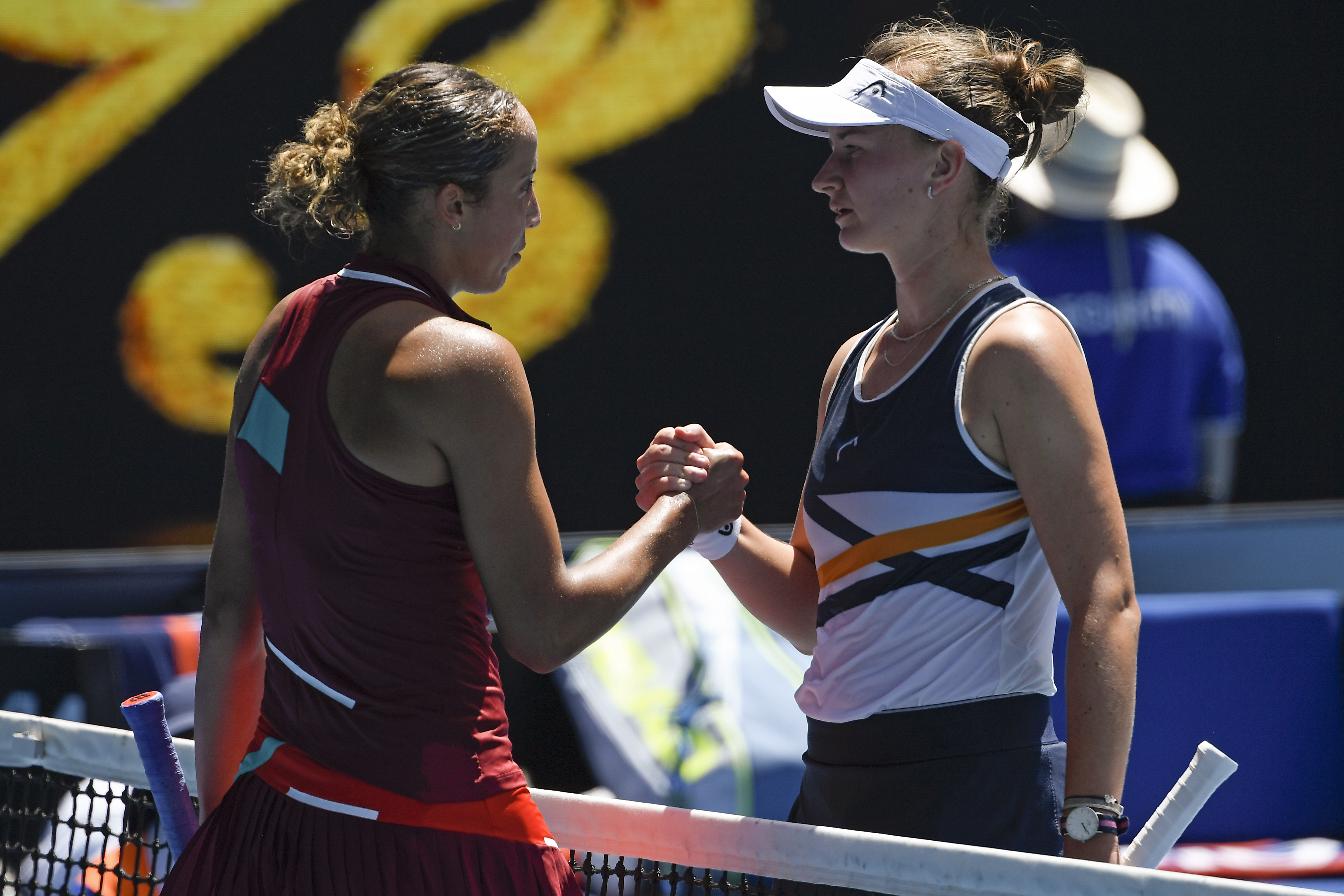 Madison Keys, left, of the U.S. is congratulated by Barbora Krejcikova of the Czech Republic following their quarterfinal at the Australian Open tennis championships in Melbourne, Australia, Tuesday, Jan. 25, 2022. (AP Photo/Andy Brownbill) 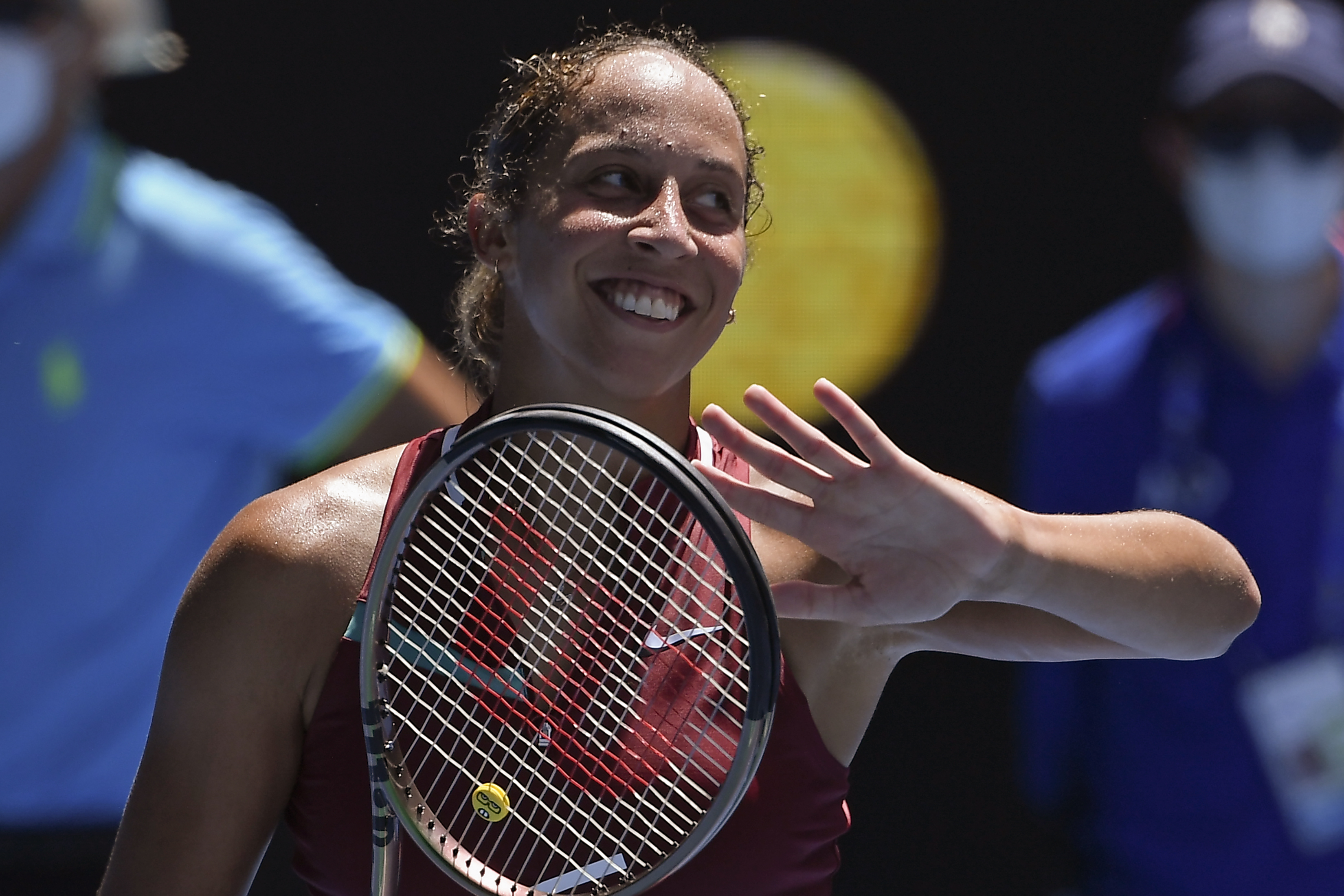 Madison Keys of the U.S. celebrates after defeating Barbora Krejcikova of the Czech Republic in their quarterfinal at the Australian Open tennis championships in Melbourne, Australia, Tuesday, Jan. 25, 2022. (AP Photo/Andy Brownbill)