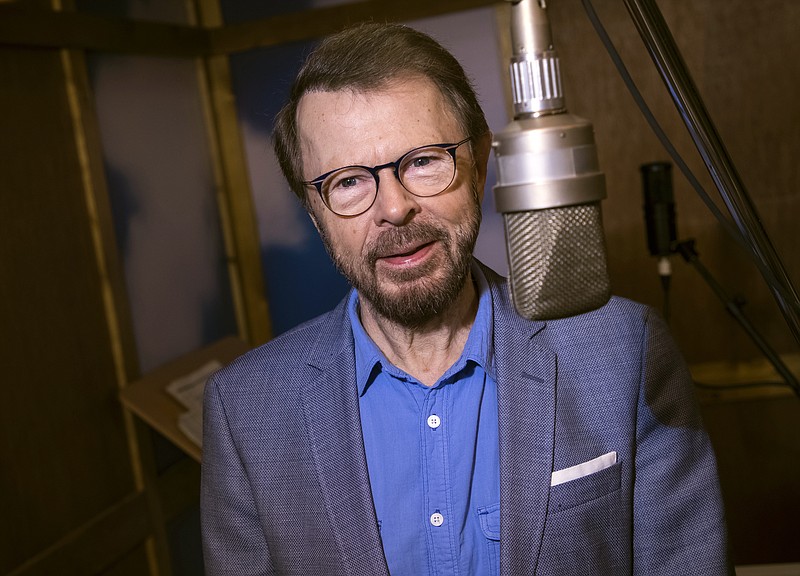 FILE - Bjorn Ulvaeus, of ABBA, poses for photographers in a recreation of the Swedish recording studio Polar on Dec. 13, 2017, in London. Ulvaeus is launching a radio show on Apple Music. The songwriter and guitarist will host the &quot;Bj&#xf6;rn from ABBA and Friends' Radio Show&quot; on Apple Music Hits starting Monday, Jan. 24, 2022. (Photo by Vianney Le Caer/Invision/AP, File)

• ABBA's Bjorn Ulvaeus on Monday launched a radio show on Apple Music Hits, with hopes of figuring out why his songs like "Mamma Mia" and "Dancing Queen" have stayed stuck in the heads of so many people for decades. The limited series includes music and conversations with friends and collaborators of the guitarist, singer and co-songwriter from the Swedish supergroup, beginning with his fellow producer, songwriter and Rock and Roll Hall of Famer Nile Rodgers. Ulvaeus and Rodgers talked about the secrets of hit-making and why ABBA's music has remained in the public consciousness. "I have long wanted to ask some emotionally intelligent as well as intellectual people who know about ABBA about why they think our songs have lasted for such a long time -- almost 50 years -- because I don't understand it myself," said Ulvaeus, 76. The show comes amid an ABBA renaissance. Ulvaeus and bandmates Agnetha Faltskog, Anni-Frid Lyngstad and Benny Andersson released their first new music together in four decades in November on the album "Voyager." And in May, a series of holographic live shows is set to begin, created by the group and George Lucas' special-effects company, Industrial Light & Magic.

• The sister of Spain's King Felipe VI, Cristina de Borbon, and her husband, Inaki Urdangarin, are ending their marriage of nearly 25 years, Spain's state news agency EFE reported Monday, citing a statement from the couple. The announcement came a week after a gossip magazine in Spain published photos of Urdangarin taking a stroll in a French coastal town while holding hands with a work colleague. The couple asked for "respect" for a private decision "to end our marriage relationship by mutual agreement," and they said their commitment to their four children remained "intact." Urdangarin, a 54-year-old former Olympic handball medal winner, was convicted of fraud and tax evasion in 2018. The couple was stripped of their aristocratic titles and dropped from the Royal House's payroll, and he served part of a five-year and 10-month sentence until early last year when judges allowed him to swap it for community work. The judicial process, which also saw Cristina questioned and fined as a beneficiary of her husband's crimes, contributed to the erosion of the royal family's image, leading eventually to the abdication of Juan Carlos I, who passed on the throne to his son, Felipe, in 2014. Urdangarin was asked last week about the photos published by Lecturas, a magazine focused on celebrities. "These are things that happen," he answered.