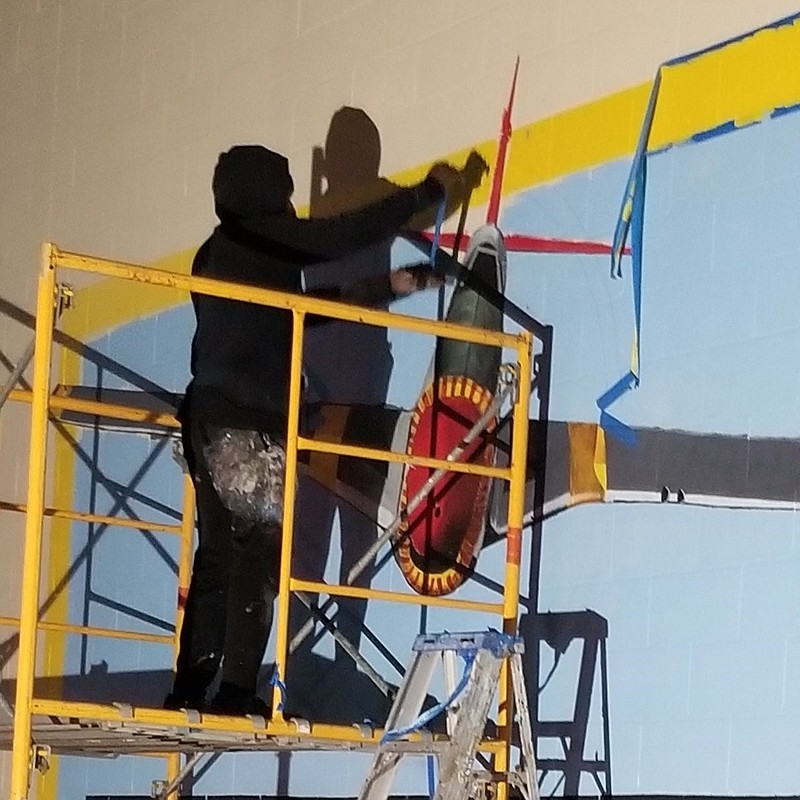 For Robert "Brandon" Maddox, it's about blending his love of history with paint, and his latest murals are big, bold and historically significant. Often, it's about his personal observations and his perspective sharpened into focus through the long lens of passing time.

Maddox doesn't just paint pretty but there's thought and retrospect behind his work, and Jefferson County Judge Gerald Robinson describes him as "a talented young man. A jewel that people should get to know."

The Sgt. Elga Lee Roberts Jefferson County Veterans Service Office, 114 S. State St. opened in November. Robinson approached Maddox about completing two murals, one on the exterior and the other on the inside.

Robinson said they knew from the inception that they wanted murals on the inside and out that mimicked the other murals in the area, but reflecting the military-related mission of the VA Center. He wanted to grab tourists' attention and the personal touch that a hometown artist like Maddox brought to the work.

"I've seen a few of his pieces and greatly appreciate his talent," Robinson said.

His bright colors and the scale of his subjects work well when painting a large-scale mural.

Speaking from his Atlanta, home, the 31-year-old Maddox recently discussed his work.

"The judge gave me an idea of what they wanted and I believed I could do it, but the time frame was my concern," Maddox said.

While gaining his footing as an artist, Maddox has a day job as a quality engineer with Carcoustics USA South in Buford, Ga. He graduated with an engineering degree from the University of Arkansas at Pine Bluff in 2013.

By combining his vacation time and his December holiday, he decided he could commit to the project.

It was "my only window to do it," Maddox said.

Robinson said, "I was very happy with the finished product."

Maddox was commissioned to undertake the work, and the VA staff had specific instructions on the subject, at least on the inside of the building. These included former Secretary of State Colin Powell, Gen. Lori Robinson, Adm. Michael Martin Gilday and Gen. David Hilberry Berger.

Adm. Gilday has served as the 32nd Chief of Naval Operations since 2019.

Maddox arrived in Pine Bluff and was on the job Dec. 7. He would complete both murals by New Year's Eve.

Outside the VA facility, Maddox had more leeway.

"For the exterior the subject matter was given and upon my research I found that two Tuskegee airmen were from Pine Bluff and decided to pay homage to them," Maddox said.

Both were original Tuskegee Airmen.

Maddox, who has an interest in history, said, "I enjoyed learning about their stories."

Clark was born in 1919 in Pine Bluff and became the first Black fighter pilot from Arkansas in the U.S. Army Air Forces to be assigned to the 553rd Replacement Training Unit at Selfridge Field in Michigan.

He attended Harvard Medical School and became the first Black staff physician at Kaiser Hospital in San Francisco, Calif. He died in 2019.

Many of Maddox's subjects are drawn from history as well as Black history so this mural was a perfect fit for him.

The extended work schedule allowed him to visit with his parents, Angela and David Maddox, along with his biological father, Darryl Cook.

"I was able to spend time with them," and he said he was able to cultivate a relationship with Cook who often brought Maddox lunch while he was working.

They were thrilled with his work.

"Oh, man, it was a little bittersweet, I wish he was still alive to see it," Maddox said.

Still, White is part of these murals. Before starting, Maddox used one of his grandfather's favorite sayings, "God bless the labor of these hands."

GROWING UP IN PINE BLUFF

Although he doodled as a kid and was described as having an eye for detail, Maddox didn't pick up the paintbrush with any serious intent until about 2016.

"My drawing tapered off during high school and college. I was in a different space." In other words, he said, he was more interested in baseball.

He attended Trinity Episcopal School at Pine Bluff but it wasn't until a couple years after college graduation that he turned back to art.

His engineering job didn't reach into his creative side like painting does.

A couple of years after college graduation, he picked up a paintbrush. He works primarily in oil but also works in mixed mediums. He uses acrylics for murals.

For him, "It's an escape...It's about finding those special, creative moments."

THE GIRL AND THE BUTTERFLY

"Colorless" is now part of the Little Rock's Mosaic Templars Cultural Center's permanent collection in 2017, and while Maddox is fascinated by history, his work often contains commentaries that are as strong and bold as his color choices.

It's hard to look away from the oil painting that focuses on a young Black girl drinking from a whites-only fountain, while a butterfly floats above.

Maddox named it "Colorless," because, he said, "It's not black water or white water but it is vital for all humans."

Labeling water fountains and entryways and more was a common practice in the early and mid part of the last century, and Maddox said, "It shows the ignorance of adults..."

In his painting, just as a caterpillar goes through a metamorphosis, he said, "The butterfly represents a reformed way of thinking...A place of love and acceptance."

In 2019, Maddox painted a mural inside Neighbor to Neighbor at 1419 S. Pine St. that has since become a much-recognized symbol for the nonprofit organization.

His portrait of a Black woman with short braids who seems to be looking toward the future, and a large black bird with bright red markings in flight, commands visitors' attention.

She now describes Maddox's painting as "so iconic, it has become a part of our brand," and many Jefferson County residents now recognize them for it.

Tate and Maddox go way back. She was his first-grade teacher, who he said he adored and for whom he was happy to do the piece.

"I'm excited to hear that he is continuing to do more murals in Pine Bluff. He is very talented and a nicer young man you will never meet," Tate said. 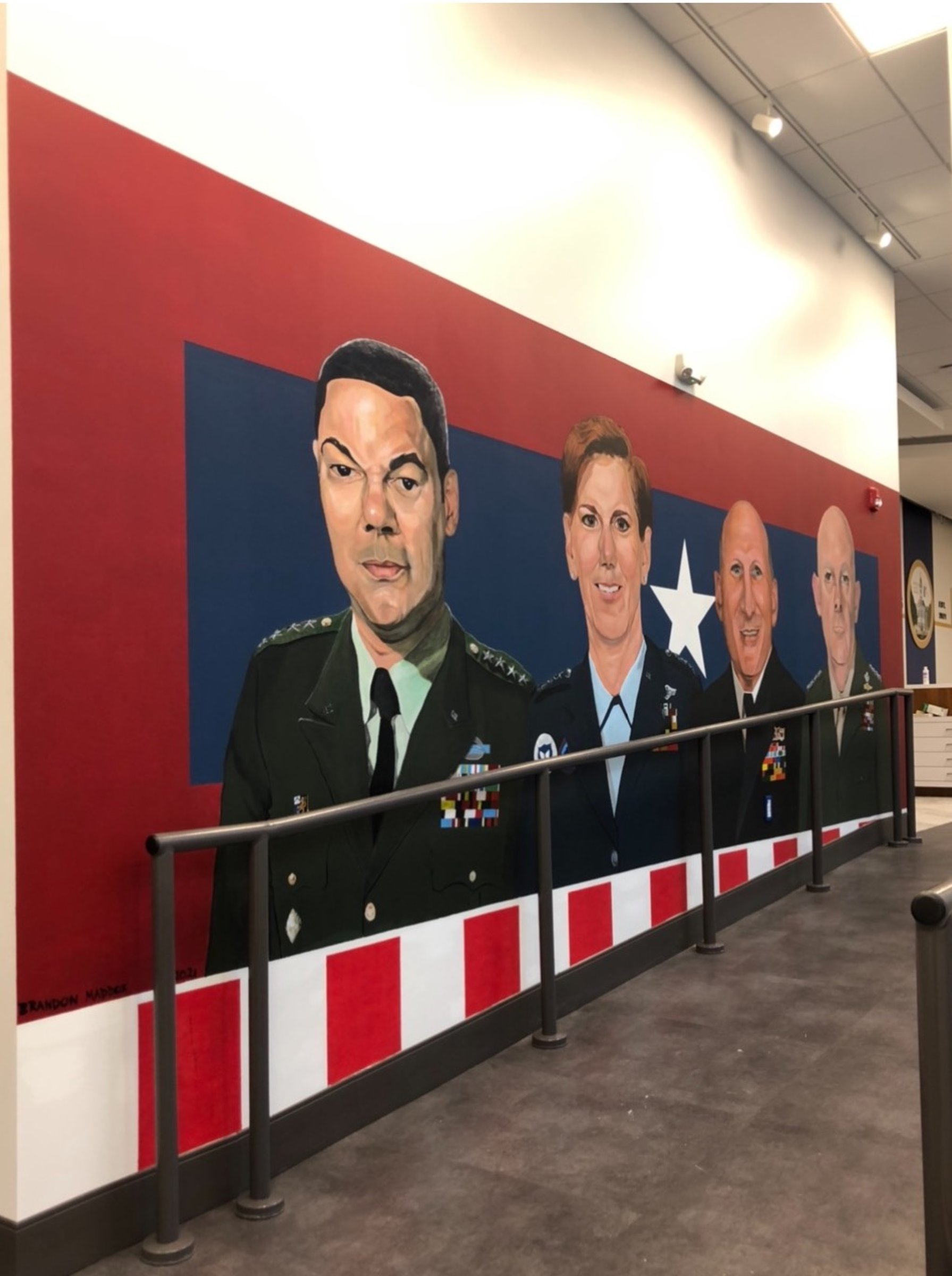