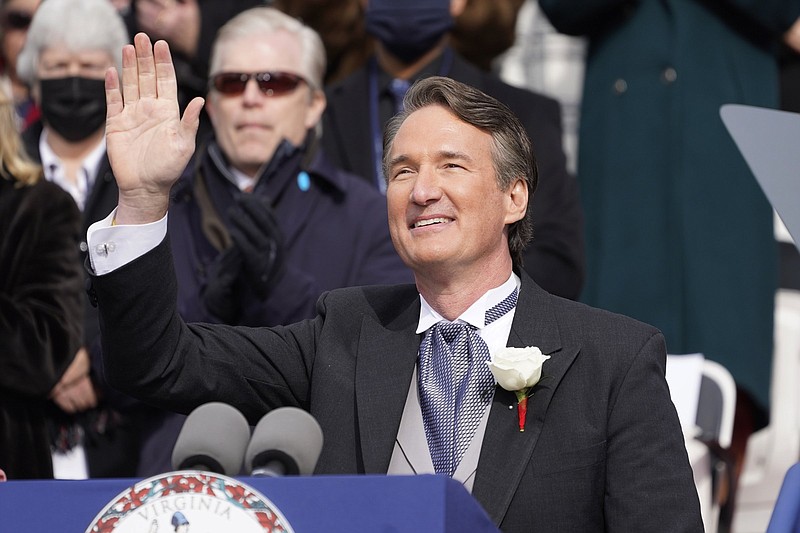 Virginia Gov. Glenn Youngkin waves to the inaugural crowd after being sworn in at the Capitol Saturday Jan. 15, 2022, in Richmond, Va. (AP Photo/Steve Helber)

RICHMOND, Va. -- Republican Virginia Gov. Glenn Youngkin was facing a new legal challenge over his executive action that aimed to let parents opt out of school mask mandates as his order took effect Monday but was ignored by some districts.

Youngkin issued the order as one of his first acts after being sworn in as governor Jan. 15 and confusion has swirled over the implications since then. Some districts have interpreted the order as being at odds with a state law that deals with covid-19 mitigation in schools and have opted to keep preexisting mask mandates in place for students.

[Video not showing up above? Click here to watch » arkansasonline.com/125va/]

On Monday, some students reporting to class ignored local mandates and went maskless, but there were no reports of major issues or violent confrontations.

With the order facing a legal challenge filed last week filed by a group of parents and another filed Monday morning by seven school boards, Youngkin urged patience and asked parents to listen to their children's school principals for the time being.

"Listen to a principal today. And I know that there are some school systems that are doing things that are inconsistent with respecting the rights of parents. ... Let's respect it right now and let this legal process play out," he said in an interview with Richmond radio station WRVA.

The lawsuit argues the state constitution gives local school boards the authority to run their districts. It also cites a state law that requires school systems to follow federal health guidelines, which include recommendations for universal masking.

"At issue is whether locally-elected school boards will maintain the exclusive authority and responsibility conferred upon them by Article VIII, Section 7 of the Constitution of Virginia to supervise the public schools in their respective school divisions or whether the Governor can unilaterally infringe upon that authority through an executive order," the lawsuit states.

Youngkin spokesperson Macaulay Porter said the administration was disappointed that the school boards were acting counter to parents' rights.

"The governor and attorney general are in coordination and are committed to aggressively defending parents' fundamental right to make decisions with regard to their child's upbringing, education and care, as the legal process plays out," she said in a statement.

Supporters of the executive order say the state law is not in conflict with Youngkin's executive order because the Centers for Disease Control and Prevention only recommends mask-wearing and does not mandate it. But Fairfax County School Board Chair Stella Petarsky said the existing mask mandate has allowed the school system to maintain in-person learning throughout the school year.

"We have held transmission levels low," she said. "We have not had to shut a single school because of covid. We've kept our kids in the classroom, and we're going to do everything in our power to ensure that we continue that."

The day seemed to unfold in most schools without mass chaos. In northern Virginia's Loudoun County, no students were sent home Monday morning for defying the mask order, said Wayde Byard, a school district spokesperson.

Those who refused to wear masks were routed to school auditoriums where they could do virtual work through the school's online platform, he said. Lunch periods were adjusted to ensure maskless students would receive lunch, he said.

At Woodgrove High School, for example, about 30 students out of more than 1,400 refused to wear masks.

Four or five parents opted to pull their children. The rest stayed at the school, isolated from masked peers, he said.

He said there were angry parents at a few schools, but principals defused the situations.

"It was pretty much a non-event," Byard said.

In Richmond, a school spokeswoman said that to the best of her knowledge, the district had no students show up maskless in protest.

Parent Carra Rose said her third grader and kindergartener -- who have been wearing N95 masks to school -- were excited that Richmond Public Schools kept its mask mandate in place.

"They're old enough to understand what this virus can do and that their grandmother is also immunocompromised," she said. "They wouldn't be able to see their grandmother, and they want to keep everybody as safe as possible."

Elicia Brand, a Loudoun County parent and co-founder of Army of Parents, a Virginia-based grassroots organization, opposes the mask mandates but said she is understanding for now of the fact that Youngkin advised parents to listen to local principals.

"We will hold him accountable to have our backs," she said. "He has to remember it was parents who put him in office."

She said she gave her own middle school children the opportunity to decide for themselves whether to wear masks, and they chose to do so, in part because they did not want to stand out. She said she observed varied responses from principals across the county in how respectfully they treated maskless children.

Monday's lawsuit came after a group of parents in Chesapeake filed a petition last week at the Virginia Supreme Court challenging the executive order. The court has so far taken no action.

Democrats commended the school boards who filed suit against Youngkin on Monday and accused the governor of using children as political pawns.

"Youngkin is quickly on his way to becoming the most divisive and authoritarian governor in our commonwealth's long history," state Sen. Mamie Locke said at a news conference.

Information for this article was contributed by Bryan Gallion of The Associated Press.