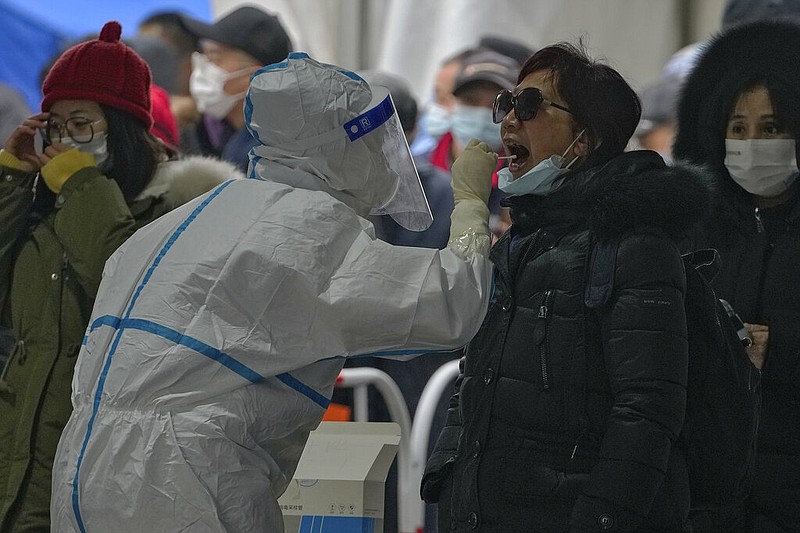 A woman get a throat swab at a mass coronavirus testing site in Beijing, Monday, Jan. 24, 2022. (AP/Andy Wong)

World health officials are offering hope that an ebbing of the omicron wave will give way to a more manageable phase of the covid-19 pandemic, even as they warn of difficult weeks ahead and the possibility of another, more dangerous variant arising.

In the U.S., cases have crested and are dropping rapidly, following a pattern seen in Britain and South Africa, with researchers projecting a period of low spread in many countries by the end of March. Though U.S. deaths -- now at 2,000 each day -- are still rising, new hospital admissions have started to fall and a drop in deaths is expected to follow.

The encouraging trends after two years of coronavirus misery have sparked a noticeably hopeful tone from health experts. Rosy predictions have crumbled before, but this time they are backed by what could be called omicron's silver lining: The highly contagious variant will leave behind extremely high levels of immunity.

On Monday, the World Health Organization issued a statement anticipating an end to the "emergency phase" of the pandemic this year and saying that the omicron variant "offers plausible hope for stabilization and normalization."

But with vaccination, new drug therapies and -- during surges -- testing and masks, the world could reach a less disruptive level of disease in which the virus is, as Fauci put it, "essentially integrated into the general respiratory infections that we have learned to live with."

The places in the U.S. where omicron struck first are seeing the sharpest declines. New cases in the Northeast are nose-diving, while other states -- including Arizona, Texas, Oregon, Kansas and North Dakota -- are still waiting for relief.

Falling, too, are new U.S. hospital admissions of patients with confirmed covid-19. They are averaging nearly 20,000 per day, down about 7% from the previous week, according to the Centers for Disease Control and Prevention.

Those numbers include patients who went to hospitals for other reasons and tested positive. But even after accounting for these incidental infections, the trend is hopeful.

One influential model projects that nearly all nations will be past the omicron wave by mid-March, including China and other countries with "zero covid" policies. The wave will leave behind high levels of immunity -- both from infection and vaccination -- that could lead to low levels of transmission for many weeks or months.

"What do we end up with at the end of this?" said Dr. Christopher Murray of the University of Washington, who developed the closely watched Institute for Health Metrics and Evaluation model. "We end up with the highest levels of global immunity that we've seen in the pandemic."

The model estimates that 57% of the world's population already has been infected with the virus at least once.

Another research group, which combines several models and shares the projections with the White House, predicts a strong decline in U.S. infections by April, unless a new variant emerges that can sidestep the growing levels of immunity.

"It would be dangerous to forget that possibility, as it has caught us before," said Katriona Shea of Pennsylvania State University, a leader of the team that pulls together the models.

"Even if we project a more optimistic future, right now we still have a lot of covid spreading, a lot of strain in our hospital systems, and our deaths have not yet peaked," said Lauren Ancel Meyers, director of the University of Texas COVID-19 Modeling Consortium.

"There's still a lot of pain before omicron has run its course," she said, but added: "It's very plausible that omicron will be a turning point in terms of our relationship with this virus."

The WHO's director-general warned Monday that conditions remain ideal for more coronavirus variants to emerge, and it's dangerous to assume omicron is the last one or that "we are in the endgame."

But Tedros Adhanom Ghebreyesus said the acute phase of the pandemic could still end this year if some key targets are met.

Tedros laid out an array of achievements and concerns in global health over issues like reducing tobacco use, fighting resistance to anti-microbial treatments, and risks of climate change on human health. But he said "ending the acute phase of the pandemic must remain our collective priority."

"There are different scenarios for how the pandemic could play out and how the acute phase could end." He added, "globally, the conditions are ideal for more variants to emerge."

But he insisted that "we can end covid-19 as a global health emergency, and we can do it this year," by reaching goals like WHO's target to vaccinate 70% of the population of each country by the middle of this year, with a focus on people who are at the highest risk of covid-19, and improving testing and sequencing rates to track the virus and its emerging variants more closely.

Omicron, which is less likely to cause severe illness than the previous delta variant, spreads more easily than other coronavirus strains and has become dominant in many countries. It also more easily infects those who have been vaccinated or have previously been infected with the virus.

"It's true that we will be living with covid for the foreseeable future and that we will need to learn to manage it through a sustained and integrated system for acute respiratory diseases" to help prepare for future pandemics, Tedros said. "But learning to live with covid cannot mean that we give this virus a free ride. It cannot mean that we accept almost 50,000 deaths a week from a preventable and treatable disease."

In stark terms, Tedros also appealed for strengthening WHO and increasing funding for it to help stave off health crises.

"Let me put it plainly: If the current funding model continues, WHO is being set up to fail," he said. "The paradigm shift in world health that is needed now must be matched by a paradigm shift in funding the world's health organization."

Virus-fighting antibodies capable of blocking the omicron variant persist four months after a third shot of the Pfizer-BioNTech coronavirus vaccine, according to a new study.

The study, which was published on a preprint server Saturday, gives a first hint about the durability of vaccine protection, with a key line of immune defense remaining intact. The study has not yet been peer-reviewed and will need to be replicated and extended to a longer period.

The laboratory study suggests another shot may not be needed right away -- a question that has caused anxiety for people wondering if and when they will need to get another booster.

"This is very, very new for the field," said Pei-Yong Shi, a microbiologist at the University of Texas Medical Branch in Galveston, whose team tested antibodies in the blood of vaccinated people against an omicronlike virus in collaboration with Pfizer scientists. "That really shows that at least up to four months, post-dose three, there are still substantial neutralizing activity against omicron."

Antibodies are known to drop off in the months after vaccination. Omicron drew special concern because even in the month after two doses, when levels of virus-fighting antibodies should be near their peak, antibodies capable of blocking omicron were minimal, and even undetectable in many subjects. Those omicron-blocking antibodies were even less evident at the time people were about to receive third doses.

Multiple studies have shown this erosion.

"You wait a month and check the blood, and almost zilch neutralization activity against omicron," said Duane Wesemann, an immunologist at Brigham and Women's Hospital in Boston, who was not involved in the study.

A third dose rebuilds that line of immune protection against omicron, but just as important, it increases the breadth of the immune response by creating a more potent repertoire of antibodies -- a process known as affinity maturation. This greater breadth of protection is thought to be a large part of why the third shot is so helpful against omicron.

[Video not showing up above? Click here to watch » arkansasonline.com/125calif/]

A major question had been how long that shored-up protection would last.

During the four months after a booster shot, antibodies against omicron did drop, the study found. But they remained high enough that, at least inferring from comparisons with other variants, they should continue to provide a layer of protection, Shi said.

The big uncertainty, said Shane Crotty, a vaccine expert at La Jolla Institute for Immunology, is whether antibody levels continue to drop after four months, or eventually stabilize at some level.

Pfizer and BioNTech said in a statement Monday that they will soon be testing a fourth dose of the original vaccine and an omicron-specific booster in human trials.

The companies plan to manufacture 4 billion doses of their vaccine this year, regardless of whether they continue to make the original shot or revise it to match omicron, the companies said.

Antibodies are just one easily measurable component of the immune response, and protection against severe illness and hospitalization can remain intact even as the levels of antibodies drops off.

Information for this article was contributed by Carla K. Johnson and Jamey Keaten of The Associated Press; and by Carolyn Y. Johnson of The Washington Post.