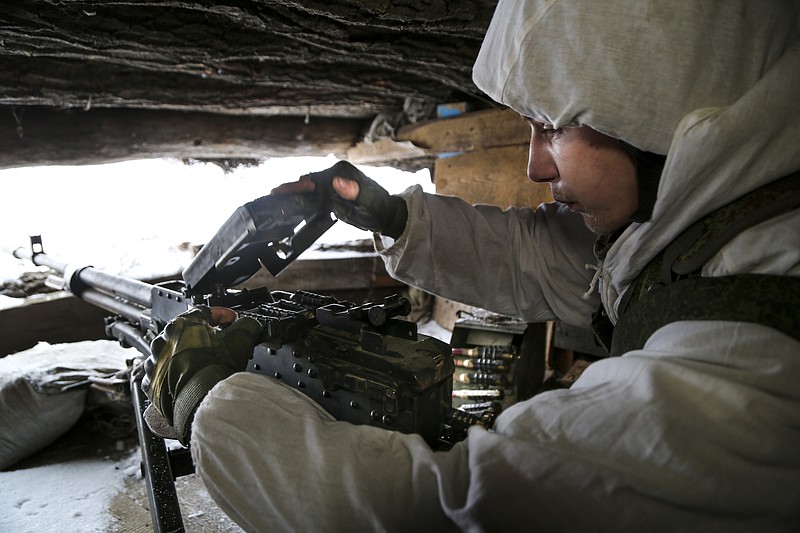 A serviceman checks his machine-gun in a shelter on the territory controlled by pro-Russian militants at frontline with Ukrainian government forces in Slavyanoserbsk, Luhansk region, eastern Ukraine, Tuesday, Jan. 25, 2022. Ukraine's leaders sought to reassure the nation that a feared invasion from neighboring Russia was not imminent, even as they acknowledged the threat is real and prepared to accept a shipment of American military equipment Tuesday to shore up their defenses. (AP Photo/Alexei Alexandrov)

KYIV, Ukraine -- Ukraine's leaders sought Tuesday to reassure the nation that an invasion from neighboring Russia was not imminent, even as they acknowledged the threat is real and received a shipment of U.S. military equipment to shore up their defenses.

Moscow has denied it is planning an assault, but it has massed an estimated 100,000 troops near Ukraine in recent weeks and is holding military drills at multiple locations in Russia. That has led the United States and its NATO allies to rush to prepare for a possible war.

U.S. President Joe Biden told reporters that Russian President Vladimir Putin "continues to build forces along Ukraine's border," and an attack "would be the largest invasion since World War II. It would change the world."

Several rounds of high stakes diplomacy have failed to yield any breakthroughs, and tensions escalated further this week.

NATO said it was bolstering its deterrence in the Baltic Sea region, and the U.S. ordered 8,500 troops on higher alert for potential deployment to Europe as part of an alliance "response force" if necessary. British Prime Minister Boris Johnson also said he is prepared to send troops to protect NATO allies in Europe.

"We have no intention of putting American forces or NATO forces in Ukraine," Biden said, adding that there would be serious economic consequences for Putin, including personal sanctions, in the event of an invasion.

In a show of European unity in Berlin, German Chancellor Olaf Scholz and French President Emmanuel Macron called for an easing of the crisis.

Scholz said he wanted "clear steps from Russia that will contribute to a de-escalation of the situation." Macron, who said he would talk to Putin by phone Friday, added: "If there is aggression, there will be retaliation and the cost will be very high."

The U.S. and its allies have threatened sanctions like never before if Moscow sends its military into Ukraine, but they have given few details, saying it's best to keep Putin guessing.

The U.S. State Department has ordered the families of all American personnel at the U.S. Embassy in Kyiv to leave the country, and it said that nonessential embassy staff could leave. Britain said it, too, was withdrawing some diplomats and dependents from its embassy, and families of Canadian diplomatic staff also have been told to leave.

Ukrainian authorities, however, have sought to project calm. Speaking in the second televised speech to the nation in as many days, President Volodymyr Zelenskyy urged Ukrainians not to panic.

"We are strong enough to keep everything under control and derail any attempts at destabilization," he said.

The decision by the U.S., Britain, Australia, Germany and Canada to withdraw some of their diplomats and dependents from Kyiv "doesn't necessarily signal an inevitable escalation and is part of a complex diplomatic game," he said. "We are working together with our partners as a single team."

Defense Minister Oleksii Reznikov told parliament that "as of today, there are no grounds to believe" Russia will invade imminently, noting that its troops have not formed what he called a battle group to force its way over the border.

"Don't worry, sleep well," he said. "No need to have your bags packed."

In an interview late Monday, however, he acknowledged "risky scenarios" are possible.

Russia has said Western accusations it is planning an attack are merely a cover for NATO's own planned provocations. Kremlin spokesman Dmitry Peskov again accused the U.S. of "fomenting tensions" around Ukraine, a former Soviet state that has been in a conflict with Russia for almost eight years.

Moscow has rejected Western demands to pull its troops back from areas near Ukraine, saying it will deploy and train them wherever necessary on its territory as a response to what it called "hostile" moves by the U.S. and its allies. Thousands of troops from Russia's Southern and Western Military Districts took part Tuesday in readiness drills in those regions in maneuvers involving Iskander missiles and dozens of warplanes.

In 2014, after the ouster of a Kremlin-friendly president in Kyiv, Moscow annexed Ukraine's Crimean Peninsula and threw its weight behind a separatist insurgency in the country's eastern industrial heartland. Fighting between Ukrainian forces and Russia-backed rebels has killed over 14,000 people, and efforts to reach a settlement have stalled.

In the latest standoff, Russia wants guarantees from the West that NATO will never admit Ukraine as a member and that the alliance would curtail other actions, such as stationing troops in former Soviet bloc countries. Some of these, like the membership pledge, are nonstarters for NATO, creating a seemingly intractable stalemate that many fear can only end in a war.

Moscow has accused Ukraine of massing troops near rebel-controlled regions to retake them by force -- accusations Kyiv has rejected.

Analysts say Ukraine's leaders are caught between trying to calm the nation and ensuring it gets sufficient assistance from the West in case of an invasion.

"The Kremlin's plans include undermining the situation inside Ukraine, fomenting hysteria and fear among Ukrainians, and the authorities in Kyiv find it increasingly difficult to contain this snowball," said political analyst Volodymyr Fesenko.

With little sign of diplomatic progress, and rhetoric reminiscent of the Cold War, Russia on Tuesday announced a flurry of military drills across its vast territory, spanning from the Pacific Ocean to its western flank around Ukraine.

The announcement, which came after a series of military moves made by the United States and NATO aimed at deterring a Russian incursion into Ukraine, demonstrated the vast reach of the Russian forces and were carried out by units positioned to the north, south and east of Ukraine.

They involved tanks and drones, troops from regular infantry and elite paratroopers. They took place both near Ukraine and far from the region, with three navy ships taking part in joint drills with the Chinese fleet in the Arabian Sea, the Russian defense ministry said. The Russians limited access to independent journalists, instead releasing photos and video of the drills.

In the west of Russia, crews boarded the Iskander-M short-range ballistic missile systems, drove them to a training ground and lifted their missiles up in their combat positions, according to a video released by the ministry.

Closer to Ukraine, Russian troops continued to disembark heavy-duty armored vehicles and other equipment from rail platforms in Belarus, ahead of joint drills with Belarusian forces.

Belarus shares a border with Ukraine, and NATO and U.S. officials have warned that the influx of Russian forces there could threaten the Ukrainian capital, Kyiv, less than 50 miles from Belarusian territory.

Peskov dismissed such fears Tuesday, saying that tensions around Ukraine have been stirred up by the United States.

"We are observing such actions of the United States with profound concern," Peskov said Tuesday.

On the other side of Ukraine, in Crimea, Russian tanks launched planned shooting exercises. The Russian contingent in Transnistria, a breakaway region of Moldova, on Ukraine's southwest, was put on combat alert as part of a planned exercise, the ministry said.

Other exercises were also reported in the North Caucasus, near Moscow, in the Baltic Sea. In the Ivanovo region near Moscow, the Yars mobile missile launcher vehicles, used for intercontinental missiles, began patrolling the area.

Putting U.S.-based troops on heightened alert for Europe on Monday suggested diminishing hope in the West that Putin will back away.

The Pentagon said Tuesday it is still identifying the roughly 8,500 U.S. troops being placed on higher alert for possible deployment to Europe, and said that more could be tapped if needed. The U.S. is still in "active consultation" with allies about the capabilities they might need, said press secretary John Kirby.

As part of a new $200 million in security assistance directed to Ukraine from the United States, a shipment including equipment and munitions arrived Tuesday in Ukraine, according to Deputy Defense Minister Hanna Maliar.

If Russia invades, "we will provide additional defensive material to the Ukrainians, above and beyond what we have already sent," U.S. Charge d'Affaires in Ukraine Kristina Kvien said at the airport.

"And let me underscore that Russian soldiers sent to Ukraine at the behest of the Kremlin will face fierce resistance. The losses to Russia will be heavy," Kvien said.

The U.S. moves are being coordinated with other NATO members to bolster a defensive presence in Eastern Europe. Denmark is sending a frigate and F-16 warplanes to Lithuania; Spain is sending four fighter jets to Bulgaria and three ships to the Black Sea to join NATO naval forces, and France stands ready to send troops to Romania.

Biden's national security team has been working with several European nations, the European Commission, and global suppliers on contingency plans if Russia cuts off energy, according to two senior administration officials who briefed reporters about efforts to mitigate spillover effects from potential military action. The officials spoke on condition of anonymity to discuss the deliberations.

If needed, Europe would look to natural gas supplies in North Africa, the Middle East, Asia and the U.S. The effort would require "rather smaller volumes from a multitude of sources" to make up for a Russian cutoff, according to one official.