Kansas lawmaker, a pro-ivermectin doctor, is under investigation 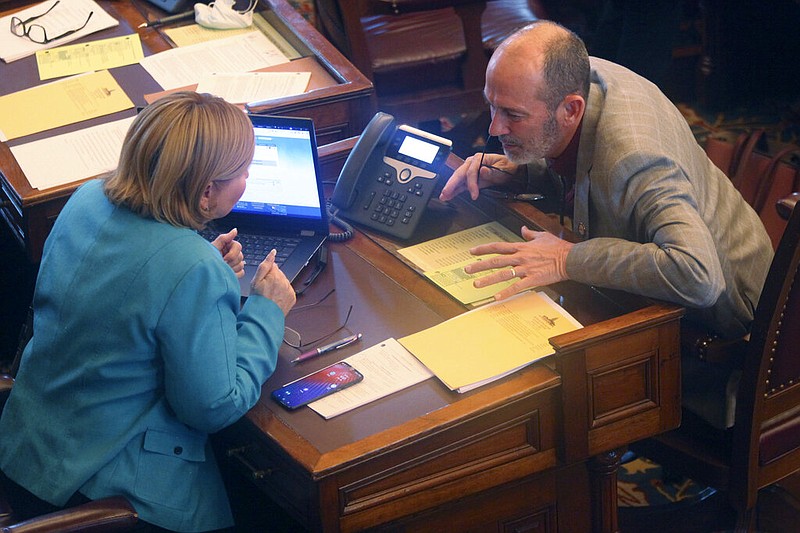 Kansas state Sens. Caryn Tyson (left), R-Parker, and Mark Steffen, R-Hutchinson, confer at the Statehouse in Topeka, Kan., in this Feb. 4, 2021, file photo. Steffen, who is also a physician, said Wednesday, Jan. 26, 2022, that he's been under investigation by the state medical board for his public comments about covid-19, dating back even to late 2020, before he was in the Legislature. (AP/John Hanna)

TOPEKA, Kan. — A Kansas doctor-lawmaker who has prescribed a parasitic worm treatment for covid-19 symptoms acknowledged Wednesday that the state medical board has been investigating him since the summer of 2020.

Conservative Republican state Sen. Mark Steffen disclosed the Kansas Board of Healing Arts’ investigation of him during a Senate committee hearing. He was testifying in favor of a bill that would require pharmacists to fill prescriptions for both the anti-worm treatment ivermectin and the anti-malaria drug hydroxychloroquine for potentially dangerous off-label uses in treating covid-19.

Steffen said the medical board has been investigating him for 18 months over statements dating back to his brief time as a local county commissioner before he took his Senate seat in January 2021. He said no hearings have been scheduled.

“They’re using it to hold over me, to think they’re going to silence me as I serve as a state senator,” he told the committee. “And obviously, that’s not working out for them.”

During the committee’s two days of hearings, several Kansas doctors reported having trouble getting ivermectin prescriptions filled by pharmacists. Committee Chair Richard Hilderband, a conservative Republican from southeast Kansas, said he expects the bill to win the panel’s approval after it is debated next week.

“That is something between a doctor and a patient, on what their best way forward on care is,” Hilderbrand said.

Steffen is among the Republican-controlled Legislature’s most vocal skeptics of masks and covid-19 vaccines and critics of the U.S. government’s and Democratic Gov. Laura Kelly’s handling of the coronavirus pandemic. He is an anesthesiologist and pain-management specialist from Hutchinson, a city of 40,000 residents about 50 miles northwest of Wichita.

Steffen even suggested that Kelly pushed the board to keep his case “in perpetual limbo” as a threat to him. The governor appoints the medical board’s members, but Kelly said she had “nothing to do with it.”

“I can’t take credit for it,” she told reporters. “This is the first I’ve heard of it.”

While medical groups and health experts have worked to stamp out the use of ivermectin for treating covid-19, hospitals around the nation have faced lawsuits over their refusal to give it to patients.

Ivermectin is approved by the U.S. Food and Drug Administration to treat infections of lice, roundworms and other tiny parasites in humans. The FDA has tried to debunk claims that animal-strength versions of the drug can help fight covid-19, warning that large doses can cause nausea, throwing up, diarrhea, seizures, delirium and even death.

And on Wednesday, top officials at two large Kansas health systems, Ascension Via Christi and University of Kansas Health, submitted testimony opposing the bill forcing pharmacists to fill ivermectin and hydroxychloroquine prescriptions, saying it “directly conflicts” with standards for pharmacists and physicians.

Susan Gile, the Kansas medical board’s acting executive director, declined to respond to Steffen’s comments, saying that the board does not confirm or deny ongoing investigations. She told the Kansas Senate committee that off-label uses of drugs are “not uncommon,” but a doctor still has a duty to do “what a reasonable physician would have done under the same or similar circumstance.”

Steffen said the investigation does not involve complaints from patients. He said in an interview that he has prescribed ivermectin as a covid-19 treatment, though he did not provide details.

Asked whether he still writes such prescriptions, he said: “I’d be more than happy to do it for people.”