Unemployment rate sinks to 3.1% in state 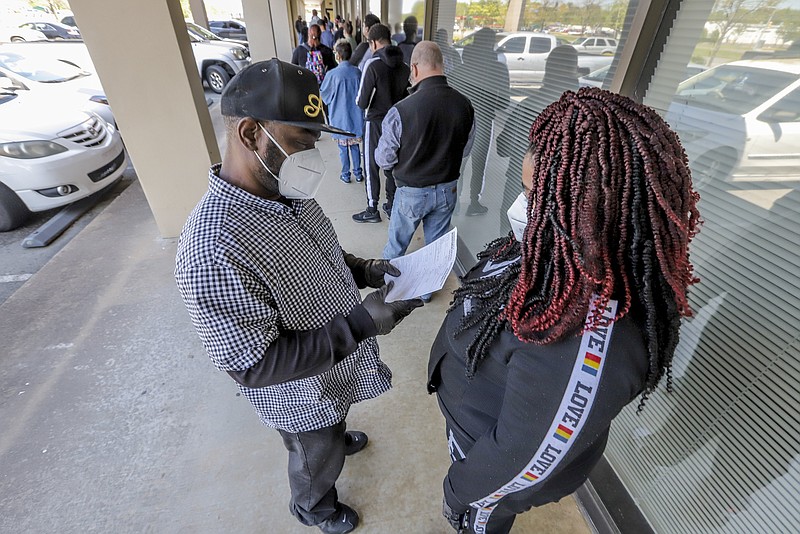 In this Thursday, April 16, 2020 photo, Keith Davis, left, and his friend Jakia Hart, left, wait outside the Arkansas Workforce Center in Little Rock, Ark. The pair said they were there because of COVID-19 related layoffs. The centers offer unemployment insurance, employment assistance and assistance for needy families, with over 30 such centers around the state.. (John Sykes Jr./The Arkansas Democrat-Gazette via AP)

Arkansas' unemployment rate continued to fall in December, ending 2021 at a record low of 3.1%. That was a decline from 3.4% in November and continued a full year of improved employment during the pandemic, state officials reported Tuesday.

Arkansas' civilian labor force shrank by 1,098, with 3,750 fewer Arkansans unemployed and 2,652 more workers with jobs. The U.S. unemployment rate declined to 3.9% in December, down three-tenths of a percentage point from 4.2% in November.

"That's an extraordinary number to get down to and it's lower than the national average," Gov. Asa Hutchinson said Tuesday about the state's unemployment rate during his weekly news conference.

Unemployment was stuck at 4.4% from March-June but has dropped steadily every month beginning in July. At the same time, statewide unemployment was lower than the overall U.S. rate throughout the entire year.

Over the last four months of 2021, payroll employment was up by 15,000 and from December 2020 to December 2021 the state gained 26,300 jobs, up 2.1%, according to Michael Pakko, chief economist at the Arkansas Economic Development Institute.

Arkansas Commerce Secretary Mike Preston noted that key sectors such as professional and business services, financial services, manufacturing, trade and transportation all added thousands of jobs during the year. "We're getting growth in the sectors that you want to see grow," Preston said, noting that those areas are important to diversifying the state's economy.

[Graphic not showing up above? Click here to see it: arkansasonline.com/126jobs]

"It's nice to have the number reflect what we're seeing -- growth in our economy," Preston said Tuesday. "Reaching 3.1% is something we've never seen before for our state. Everything is moving in the right direction."

Pakko noted that Arkansas payroll employment has nearly recovered to the pre-pandemic peak of February 2020, with the shortfall less than 10,000 jobs, or 0.7%. Nationwide, he said, the employment shortfall is 2.3% compared with February 2020.

"It was a strong way to end the year with everything looking pretty good," Pakko said of Tuesday's unemployment report.

As the unemployment rate improves, statistics reveal there is still a great deal of turmoil in the state's labor market as employers have difficulty filling jobs and more and more Arkansans are joining what is being called the "Great Resignation" as workers leave their jobs to make career switches or stay home because of pandemic-related issues such as child care or workplace-safety concerns.

The Arkansas Division of Workforce Services reported Tuesday that nearly 1,100 workers dropped out of the labor pool from November to December, indicating the number of Arkansans no longer looking for work despite jobs being available across most sectors.

State officials will focus on retraining and other efforts to strengthen and build up the labor pool, the governor said in his remarks Tuesday. "It's important to get those numbers back up," he added.

"That is a concern to us and we want to look deeper into that," Hutchinson said. "But it is a reminder of the strain that our workforce sees and feels during this pandemic. Omicron is part of the cause of some leaving the workforce ... in the Great Resignation across America."

A recent report issued by research firm WalletHub says Arkansas ranked 20th in the nation in November with 3.1% of nonfarm payroll workers joining the Great Resignation. That means more than 40,000 Arkansans dropped out of the labor pool that month and the study said the resignation rate for the past 12 months up to November was 3% in Arkansas.

Federal reports on job openings and labor turnover rates have indicated Arkansas is following a national trend of workers leaving the labor force at higher rates than ever before, Pakko said. "Arkansas has been subject to the same trends as the rest of the country and, specifically, we've had high rates of job quitting or people leaving jobs voluntarily in October and November."

Arkansas continues to attract investments and jobs. One of the most significant recently announced was U.S. Steel's plan to invest $3 billion in a new mill that is scheduled for construction beginning next month. Major announcements have been made by Amazon, Westrock Coffee, Revolution Plastics, Structurlam and Riceland Foods, among others.

Getting workers for those jobs and others that pop open across the state has become increasingly difficult. "Our problem right now is just finding enough people to fill the vacant jobs we have," Preston said of the shrinking labor pool challenge. "You talk to any business owner out there and they all say the same thing. There's still people who have not come back into the workforce or have dropped out entirely."

"The number of people actually claiming unemployment is back to where we were before the pandemic," he said.

For the full year, the trade, transportation and utilities sector added 5,200 jobs; manufacturing increased by 4,900; and the leisure and hospitality industry added 4,400 jobs. Construction fell by 2,300 jobs and the government sector lost 1,900 workers.