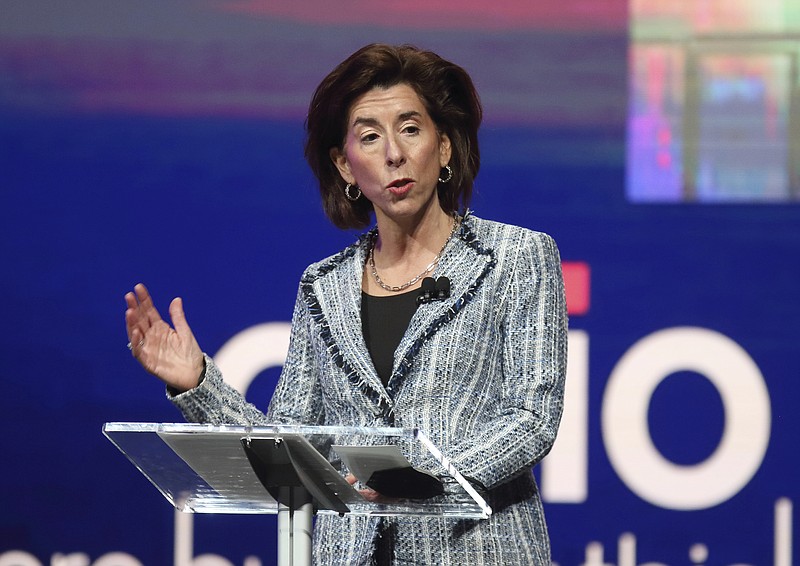 WASHINGTON -- The U.S. supply of computer chips has fallen to low levels, raising the prospect of factory shutdowns, the Commerce Department reported Tuesday.

Companies that use semiconductors are down to less than five days of inventory -- a sharp drop from 40 days in 2019, according to a department survey of 150 companies. The chips used in the production of automobiles and medical devices are especially scarce.

Demand for chips, the department said, was up 17% last year from 2019. The need for chips is expected to increase, as technologies that use vast amounts of semiconductors, like 5G communications and electric vehicles, become more widespread.

A majority of semiconductor fabrication plants are using about 90% of their capacity to manufacture chips, meaning they have little immediate ability to increase their output, according to the data that the Commerce Department compiled.

Citing the results of the survey, the Biden administration called on Congress to pass stalled legislation that would provide $52 billion for domestic semiconductor production.

"The semiconductor supply chain remains fragile, and it is essential that Congress pass chips funding as soon as possible," Commerce Secretary Gina Raimondo said in a statement. "With skyrocketing demand and full utilization of existing manufacturing facilities, it's clear the only solution to solve this crisis in the long-term is to rebuild our domestic manufacturing capabilities."

Momentum on the legislation stalled amid ideological disputes between the House and Senate over how to direct the funding. In June, House lawmakers passed their own narrower bill, eschewing the Senate's focus on technology development in favor of financing fundamental research.

But administration officials, led by Raimondo, have begun prodding lawmakers behind the scenes to help bridge their differences to swiftly pass the bill, emphasizing the urgency of quickly signing solutions into law.

"There's no getting around this. There is no other solution," Raimondo said. "We need more facilities."

The Commerce Department's survey found that it takes companies twice as long in some cases to procure certain in-demand chips, sometimes as long as a year. Survey respondents also said they did not see the supply-demand mismatch in the industry dissipating in the next six months.

The shortages have affected larger legacy chips, which are necessary for auto production, as well as the most advanced chips required to power technologies like artificial intelligence.

Raimondo said she had spent "an enormous amount of time" talking about the shortage to chief executives, some of whom had personally taken to hunting around the world for a small number of chips crucial to their supply chains.

She added that the survey also revealed the worrying extent to which the United States is reliant on Taiwan for the most advanced chips. Taiwan Semiconductor Manufacturing Co. has become the contract manufacturer of choice for many companies, which may design their chips in the United States but turn to Asia to manufacture them.

China considers its claim to Taiwan nonnegotiable, and it has been taking an increasingly aggressive military posture toward the island, potentially putting U.S. supply of advanced chips at risk.

In a briefing with reporters Tuesday, Raimondo said the survey had also uncovered unusually high prices for semiconductors that are sold through brokers, and that the Commerce Department would be investigating those practices.

The Biden administration has set up an early alert system to notify government and industry of impending chip shortages and convened company leaders to address the issue, among other actions. It has also welcomed industry investment while acknowledging that any new construction of chip manufacturing facilities in the United States will take several years and will not provide an immediate remedy to the shortages.

On Friday, Intel announced that it would invest $20 billion in a facility in Ohio, which would contain two chip factories and directly employ 3,000 people. Construction of the first two factories is expected to begin this year, but production will not start until 2025, Intel said.

Information for this article was contributed by staff members of The Associated Press, and by Ana Swanson and Catie Edmondson of The New York Times.