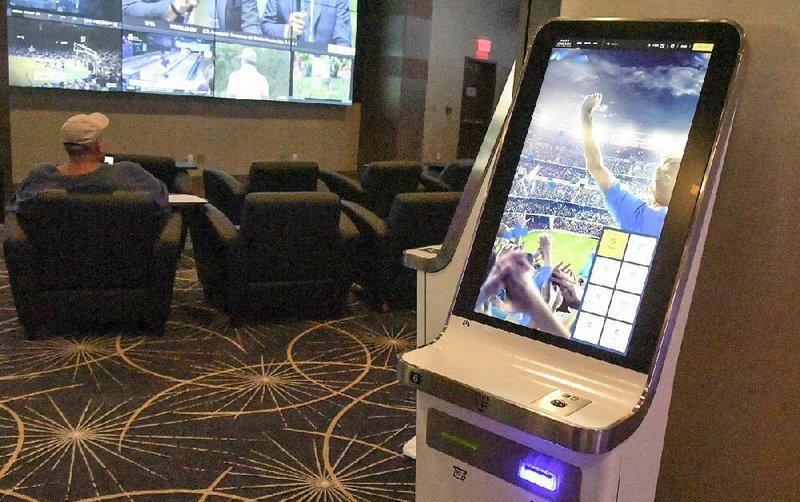 Arkansas' three operating casinos won't be able to accept mobile sports bets for the Feb. 13 Super Bowl after the attorney for the state Racing Commission decided to pull proposed rules from a legislative panel's agenda, a spokesman for the state Department of Finance and Administration said Tuesday.

The word "revenue" was changed to "receipts." But another matter had been of concern to online sports betting companies.

On Dec. 30, the Racing Commission unanimously signed off on the proposed rules that would allow mobile sports betting through the state's licensed casinos, including granting established casinos 51% of the proceeds when partnering with online bookmakers.

The 51% split would set Arkansas apart from the rest of the nation, where the average share is 5%-15% with local casinos.

John Burris, a lobbyist with the Capitol Advisors Group, who represents online sports betting operators DraftKings Inc., Fan Duel Inc., BetMGM, Fanatics and Bally's, had asked the commission on Dec. 30 to amend the proposed rules to allow the sports betting companies to negotiate the split directly with the casinos, with the casinos having complete control to "accept or reject" that offer. The change was not made.

The proposed rules had been expected to be considered by the Legislative Council's Administrative Rules Subcommittee on a supplemental agenda this morning before Freeland pulled the proposed rules off that agenda.

If the Legislative Council had approved the proposed rules this week, that would have cleared the way for the casinos to accept mobile sports bets for the Feb. 13 Super Bowl.

Hardin said Tuesday that Freeland's decision to pull the proposed rules will allow for additional time to adequately address questions recently raised by state legislators and other interested parties.

"The Commission understands making a change, although small, to the wording one day prior to legislative review results in new questions," he said in a written statement.

"By holding the rules until February or March, we ensure continued full transparency."

Gov. Asa Hutchinson said Tuesday in a written statement, "There have been concerns expressed by numerous legislators about the late change in the language of the rules for mobile sports betting.

"The change does not appear to be significant, but in fairness it made sense to consider the rules in regular order at the next meeting," the Republican governor said.

Carlton Saffa, chief market officer for the Saracen Casino Resort in Pine Bluff, said Tuesday night, "The Saracen team was prepared to speak in favor of the rule allowing mobile sports wagering; we had hoped to have this authorization before the Super Bowl.

"We planned to have subject matter experts as well as vendors representing state-of-the-art technology on hand to address any questions members may have had," he said in a written statement.

"We look forward to addressing the issue next month and are optimistic that, just as the Racing Commission passed the mobile wagering rules 7-0 [on Dec. 30], the Legislative Council will be supportive," Saffa said. "Mobile wagering has broad support and is something Arkansans ask us for daily."

Spokespeople for Oaklawn Racing Casino Resort and Southland Casino Racing could not be reached immediately for comment by email or telephone early Tuesday evening.

The Racing Commission's agenda for Tuesday morning's meeting described the changing of one word in the proposed rules as "a correction."

Under the proposed rules approved by the Racing Commission on Dec. 30, "operation of an online sports pool shall be prohibited in circumstances in which a majority of the net gaming revenue, as defined in Amendment 100, from the online sports pool is paid to a third-party vendor assisting in the operating of the sports pool."

The commission Tuesday morning voted to change the word "revenue" to "receipts" in its proposed casino gambling rules.

Freeland told the commission that the proposed change is in response to public comments questioning what the commission meant by net casino gambling "revenue." He said the word change is consistent with Amendment 100 to the Arkansas Constitution.

There is no difference in the dictionary definitions of revenue and receipts, he said.

Freeland told the commission that there is a legal argument that if a third-party vendor gets a majority of the revenue from online sports betting, that would violate Amendment 100 to the Arkansas Constitution.

In November 2018, voters approved Amendment 100 to authorize the Racing Commission to license one casino apiece at the existing racetracks in Hot Springs and West Memphis, and one casino each in Jefferson and Pope counties.

Nicole Gillum, general counsel for the Capitol Advisors Group, said in an email dated Tuesday to Freeland and commission aide Nikki Langston, "We have repeatedly raised the concern about the definitions included in the proposed mobile sports betting rule.

"We have also repeatedly expressed our concerns around the revenue share provision contained in said rule," she wrote.

In an advisory opinion dated Dec. 30 requested by state Sen. Jonathan Dismang, R-Searcy, Rutledge said it wouldn't be a violation of Amendment 100 to the Arkansas Constitution for a casino licensee to contract with a third-party vendor to assist in the operation of a certain function of casino gambling, such as an online sports pool, under which the third-party vendor retains a majority of the revenue generated from assisting in the operation of casino gambling.

"Amendment 100 is silent about such contracts or contractual agreements," Rutledge wrote in her advisory opinion.

Gillum wrote in her email to commission officials, "Given this development, and the problems it creates on multiple fronts, we believe public interest is best served by a future meeting planned well in advance where all stakesholders express opinions on what changes should be made to the proposed rule."

Rather than adopting any changes in the proposed rules Tuesday, she asked the commission in her email to plan a meeting in the near future to hear all concerns and proposed solutions after which the commission can make a decision about appropriate changes.

Rep. Les Eaves, a co-chairman of the Legislative Council's Administrative Rules Subcommittee, said in a text message to this newspaper that "several members have expressed concerns [about] changing a definition in the rule after [it] has already received public comment."

They also are concerned about the commission changing that proposed rule Tuesday and for the subcommittee to consider the proposed rule this morning, said Eaves, who is a Republican from Searcy.

Sen. Kim Hammer, a Republican from Benton who is the other co-chairman of the subcommittee, said in a text message to this newspaper, "I was beginning to hear pushback that [the revision in the proposed rule] should go back to public comment because it was a change.

"One word can have a significant meaning like the difference between may and shall," he added.

Saracen Casino Resort, Southland Casino Racing, Oaklawn Racing Casino Resort and the recently licensed Legends Resort and Casino in Pope County were given the green light in 2019 to offer sports betting on their premises.

Hardin said about $33 million was wagered on sports at the state's three casinos in 2020 and that increased to $67 million in 2021.

"While we don't have a formal revenue impact for mobile sports betting, we believe doubling the existing totals would be a very conservative estimate," he said.