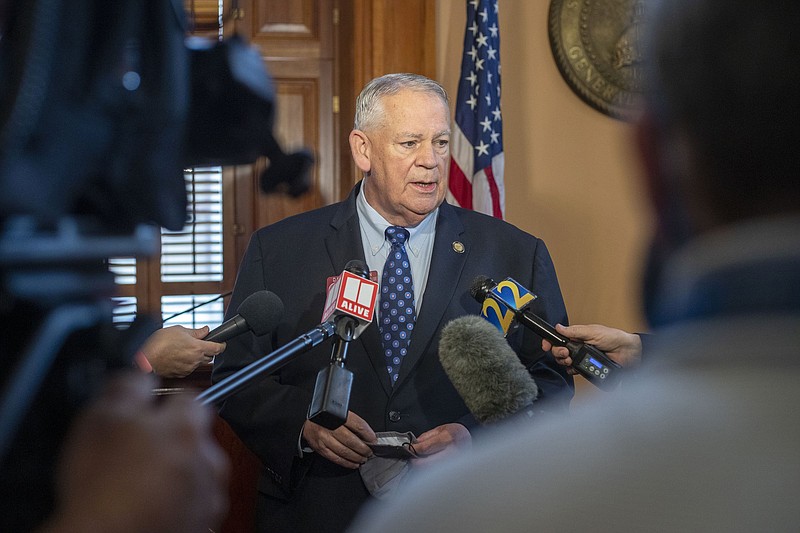 Georgia Speaker of the House Rep. David Ralston, R-Blue Ridge, speaks with reporters at the Georgia State Capitol Building in Atlanta, March 25, 2021. Facing a surge in overdose deaths and rural suicides, Georgia lawmakers unveiled a bill Wednesday, Jan. 26, 2022 to bolster the state's dismal mental health care system. The legislation would pressure private insurers to improve coverage for mental health disorders and substance abuse and create an incentive for people to become mental health workers. It was announced by Ralston, whose support gives it a strong chance of passage, though its exact cost was not immediately clear. (Alyssa Pointer/Atlanta Journal-Constitution via AP)

The legislation would pressure private insurers to improve coverage for mental health disorders and substance abuse, and create an incentive for people to become mental health workers. It also calls for a grant program to establish effective policies for ensuring adherence to court-ordered mental health or substance abuse treatment.

The bill was announced by House Speaker David Ralston, whose support gives it a strong chance of passage even though exact costs are still unclear. Flanked by lawmakers from both parties at the state Capitol, Ralston said the system has been inadequate for too long.

"I am tired of telling desperate and hurting families that we have no treatment options available in Georgia," he said. "I'm tired of seeing the faces of those whose spiral downward has been fed by substance abuse."

From 2019-20, suicides in rural Georgia increased by more than 8% to 428, according to a recent presentation by Department of Behavioral Health Commissioner Judy Fitzgerald. Fitzgerald told lawmakers preliminary data indicates 2021 was even worse.

[Video not showing up above? Click here to watch » arkansasonline.com/127ga/]

The state also experienced a surge in substance abuse. From April 2020 to 2021, Georgia overdose deaths climbed by 36% to 2,086, Fitzgerald said.

"Isolation, stress, limited access and the strain of the pandemic is having devastating consequences in our communities," she said.

The nonprofit group Mental Health America has consistently ranked Georgia among the worst states for access to mental health care. Of the state's 159 counties, 77 had no psychiatrists working full time and 76 did not have a licensed psychologist, according to a January 2021 state commission report.

A key provision of the bill aims to ensure private insurers provide the same level of benefits for depression, anxiety and other mental disorders as they do for medical conditions.

Such parity is required by federal law, which generally bans insurers from charging higher co-pays or deductibles, requiring pre-authorization or imposing other restrictions on mental health and substance abuse treatment that they don't require for medical or surgical procedures. But critics accuse insurers of violating the requirement, citing as evidence a dearth of mental health providers in insurance networks in some parts of the state.

The bill would require the state's insurance commissioner to collect data to check that insurers are complying with mental health parity requirements. The commissioner would also have to set up a process for responding to consumer complaints of potential violations.

State Insurance Commissioner John King said later he wasn't going to put insurers on the "defensive," but they "need to get on board."

"The insurance industry is listening," he said. "They're not stupid. They understand that this is important."

Insurers have known their members must have access to behavioral and physical health services since a 2008 federal parity law, said Jesse Weathington, president and CEO of the Georgia Association of Health Plans. But he said in a statement Tuesday that insurers are facing a provider shortage exacerbated by the pandemic that "has at its root the failure of Georgia to adequately invest in mental health delivery."

Ralston said separate from the bill, the budget for the next fiscal year will address vital needs in mental health and substance abuse care.

Gov. Brian Kemp has proposed millions of dollars in new funding for the state Department of Behavioral Health and Developmental Disabilities to treat adults with substance abuse and mental health problems -- and add hospital beds for those experiencing mental health crises.

Kemp praised Ralston's bill, saying in a statement it will create "a lasting, positive impact across our state."

"HB 1013 is legislation that could serve as a major step forward by ensuring that all Georgia patients have equal access to affordable mental and behavioral health treatment under state law," said David Schaefer, with the Georgia Budget and PoIicy Institute.

But his statement also called for a full expansion of Medicaid. Democrats in Georgia have pushed for full expansion for years and say it would greatly improve access to mental health services in addition to medical care. Republicans, however, oppose that plan.

Lawmakers and advocates say they want the focus on mental health to continue.

"It is truly my hope and dream that Georgians will look back on this day for generations as the beginning of a real commitment to the reform of our mental care delivery system," Ralston said.