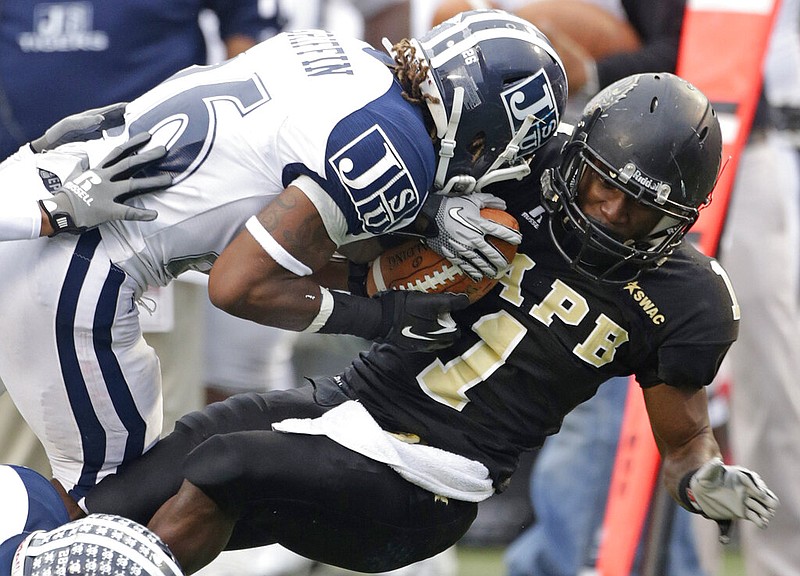 In this Dec. 8, 2012, file photo, Arkansas-Pine Bluff wide receiver Johnathan Johnson (1) is stopped by Jackson State linebacker Ryan Griffin (26) in the first half of an NCAA college game for the SWAC championship at Legion Field in Birmingham, Ala. (AP/Dave Martin)

The University of Arkansas at Pine Bluff football team will take on Jackson State University in the first SWAC Classic during the 2022 season.

The Southwestern Athletic Conference announced the launch of the neutral-site game, to debut this coming season at Legion Field in Birmingham, Ala. The Birmingham City Council approved an agreement with the conference to host the game for three years with an option for an additional two years, conference officials said Wednesday.

A specific date for the game has not been announced.

"These match-ups will be highlighted by games that are not included as a part of our league's conference slate of games but instead will feature conference opponents that will traditionally roll off each respective programs' schedule under our 10-year scheduling model," SWAC Commissioner Charles McClelland said in a news release.

Jackson State and UAPB last squared off in 2019, with JSU winning 21-12. The teams faced each other in the 2012 SWAC championship game at Legion Field, a game UAPB won 24-21 in overtime.

Jackson State won the SWAC title this past season under coach and Pro Football Hall of Famer Deion Sanders, and their success helped to bring added attention to SWAC and HBCU football.

UAPB seeks to rebound from a 2-9 season after making the spring 2021 SWAC title game in Jackson.

The SWAC Classic will also feature Jackson State against Southern University in 2023 and 2024.