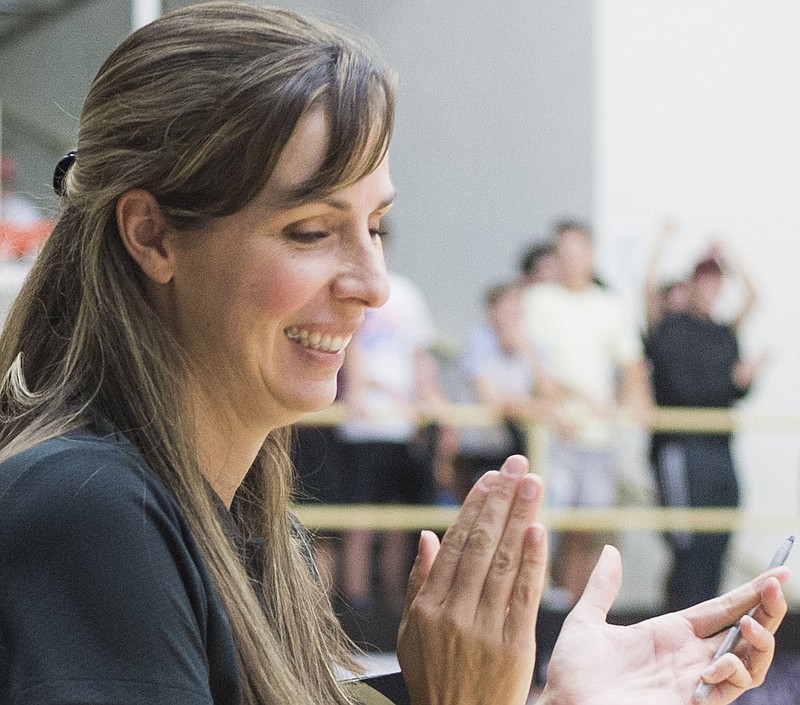 Michelle Smith has built her own type of family with the Bentonville High School volleyball program over the past 15 seasons, but now she's ready to step away to concentrate on her own household.

Smith told administration and her team on Wednesday that this year would be her last as the Lady Tigers' coach.

Watching her three daughters -- Patience (8), Grace (7) and Haven Joy (4) -- grow up before her eyes just became too difficult, Smith said. Grace was born around 24 hours after the Lady Tigers claimed the Class 7A state title in 2014.

"I don't want to look back and have regrets," Smith said. "I definitely don't in my coaching career. This is a change of season that I'm at peace with.

"I have 30-plus girls here that I'm raising every year, and I have three at home that I'm missing out on. And that's getting hard."

Smith, who was also a two-time All-Southeastern Conference honoree while playing volleyball at the University of Arkansas, leaves quite a coaching legacy at Bentonville. She has 388 career victories, including a record of 380-141- 11 at Bentonville.

She led the Lady Tigers to six state titles. That included a run of four championships in five seasons from 2007-11. She also had a 6-1 record in the state finals.

Smith also said the timing was right as the program's in great shape.

"It's not about me; it's about taking care of these girls," Smith said. "Stepping away now, the house is built. The foundation is strong. That's what brings me joy -- knowing that the next coach can walk in here and that these girls are taken care of."

"What she's done with our volleyball program has been a model for other coaches to follow," Passmore said. "She's established tradition within the Bentonville volleyball program that anybody would be proud of, not just in the state but across the country."

"She's a class act. She's built a sense of pride with her kids and we're definitely gonna miss her."

Passmore said there's no timetable yet for finding Smith's replacement.

Smith said she will help her husband with their family business and also teach online as an adjunct professor for the University of Arkansas in the Kinesiology department.

In addition, Smith's longtime assistant coach Kelli Moore is also stepping away from coaching for family reasons. Moore and Smith have been on the bench together for 11 seasons at Bentonville.