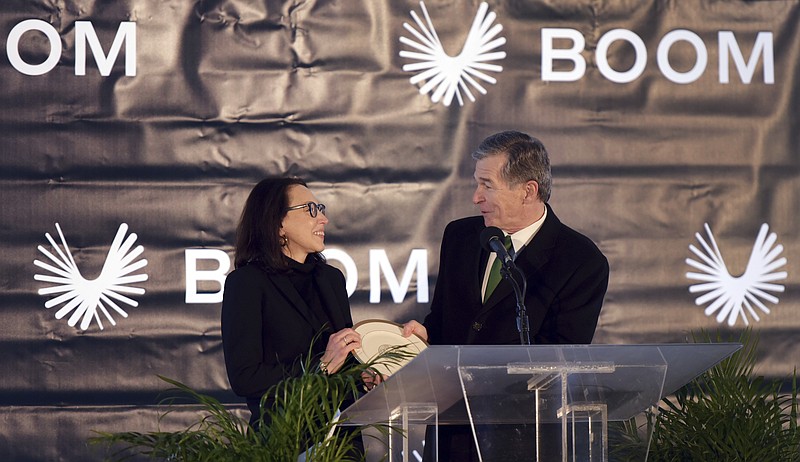 North Carolina Gov. Roy Cooper presents a gift to Kathy Savitt, President and Chief Business Officer of Boom Supersonic, during an announcement, Wednesday, Jan. 26, 2022 that the aviation company will build its supersonic jet at Piedmont Triad International Airport in Greensboro, N.C. The company said it will employ more than 1700 people by the end of the decade. (Walt Unks/Winston-Salem Journal via AP)

RALEIGH, N.C. -- A Colorado-based aviation company announced Wednesday that it has chosen a North Carolina airport as the manufacturing site for next-generation supersonic passenger jets. If successful, the investment could create more than 2,000 jobs in the region over the next decade while cutting flight times significantly for a post-Concorde generation of air travelers.

Boom Supersonic announced that Piedmont Triad International Airport in Greensboro will be the home for its first full-scale manufacturing plant, including the final assembly line, testing and delivery center for its proposed Overture supersonic airliner. Boom estimates it will create more than 1,750 jobs by 2030, with a goal of reaching more than 2,400 jobs by 2032.

State and local governments have offered $230 million in financial incentives to make the project a reality, including money for airport improvements, which lawmakers approved in November, and other sweeteners approved Wednesday.

As with most such projects, some of the incentives going to Boom Technology Inc., the company's parent, will be canceled if it doesn't meet job-creation and investment goals. The anticipated capital investment is $500 million.

Jacksonville, Fla., and Greenville-Spartanburg, S.C., were also in the running for the plant, according to a North Carolina Commerce Department official who publicly briefed an incentives committee before the announcement. The project had been known to recruiters as "Project Thunderbird."

[Video not showing up above? Click here to watch » arkansasonline.com/128boomjet/]

The Overture plane is designed to carry 65 to 88 passengers and cruise at 60,000 feet at 1,300 mph -- twice the speed of today's passenger jets. Many technical and manufacturing hurdles still must be overcome before the aircraft becomes a practical option for airlines, however.

In a news release Wednesday, the company said the new factory will begin production in 2024, with the first Overture aircraft rolled out in 2025, flying in 2026 and carrying its first passengers by 2029.

"Selecting the site for Overture manufacturing is a significant step forward in bringing sustainable supersonic air travel to passengers and airlines," Boom Supersonic CEO Blake Scholl said in the release. He said North Carolina's ready aerospace workforce, easy access to technical schools and proximity to aerospace suppliers were factors influencing the company's decision to locate in the state.

The Piedmont Triad airport is already the headquarters of Honda Aircraft Co. and the production site for its seven-passenger HondaJet Elites.

Boom is one of several companies trying to revive supersonic passenger travel, which died with the grounding of the Concorde after a crash nearly two decades ago. Boom has built a one-third-size demonstrator aircraft called the XB1, but now it faces the daunting challenge of bulking that up.

Information for this article was contributed by David Koenig of The Associated Press. 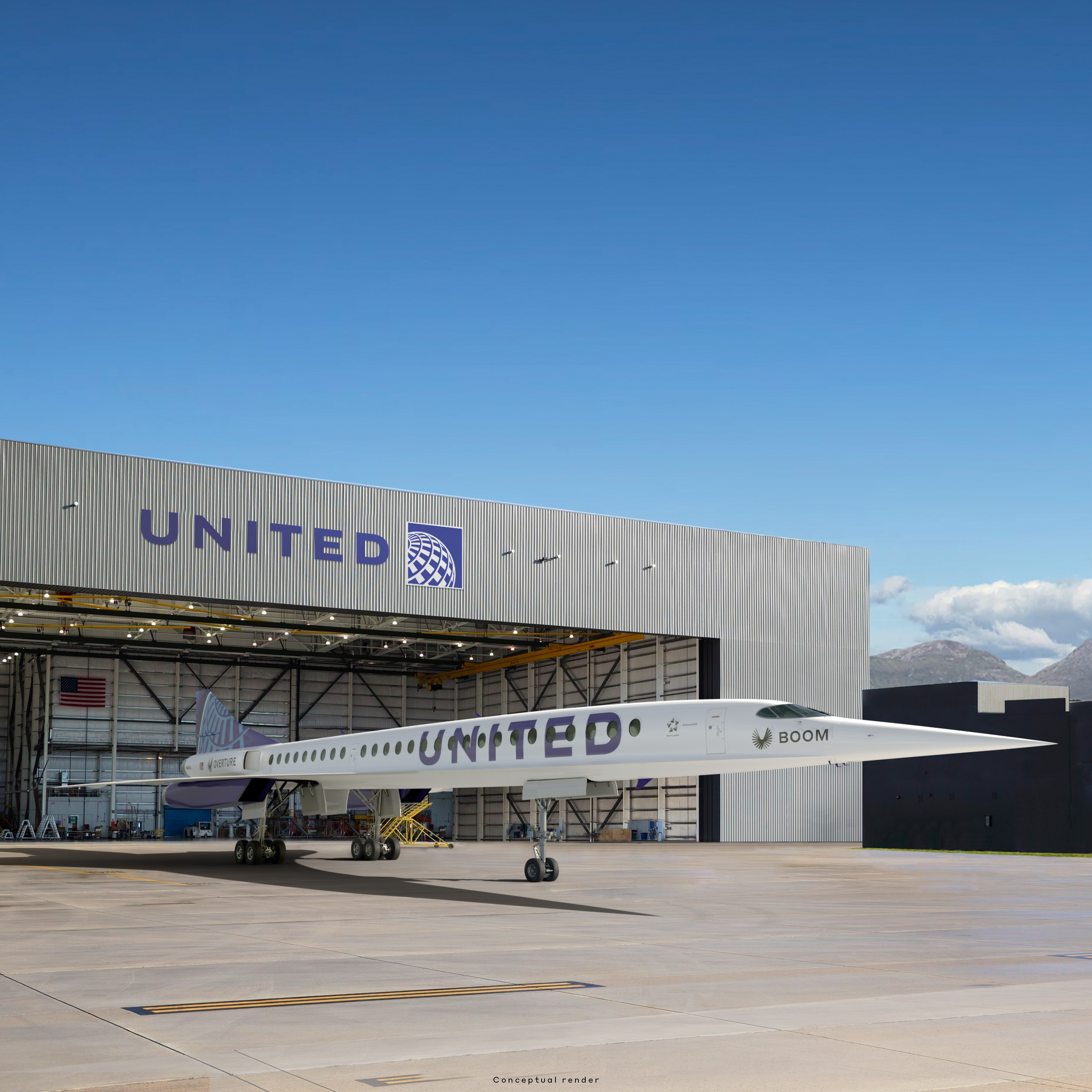 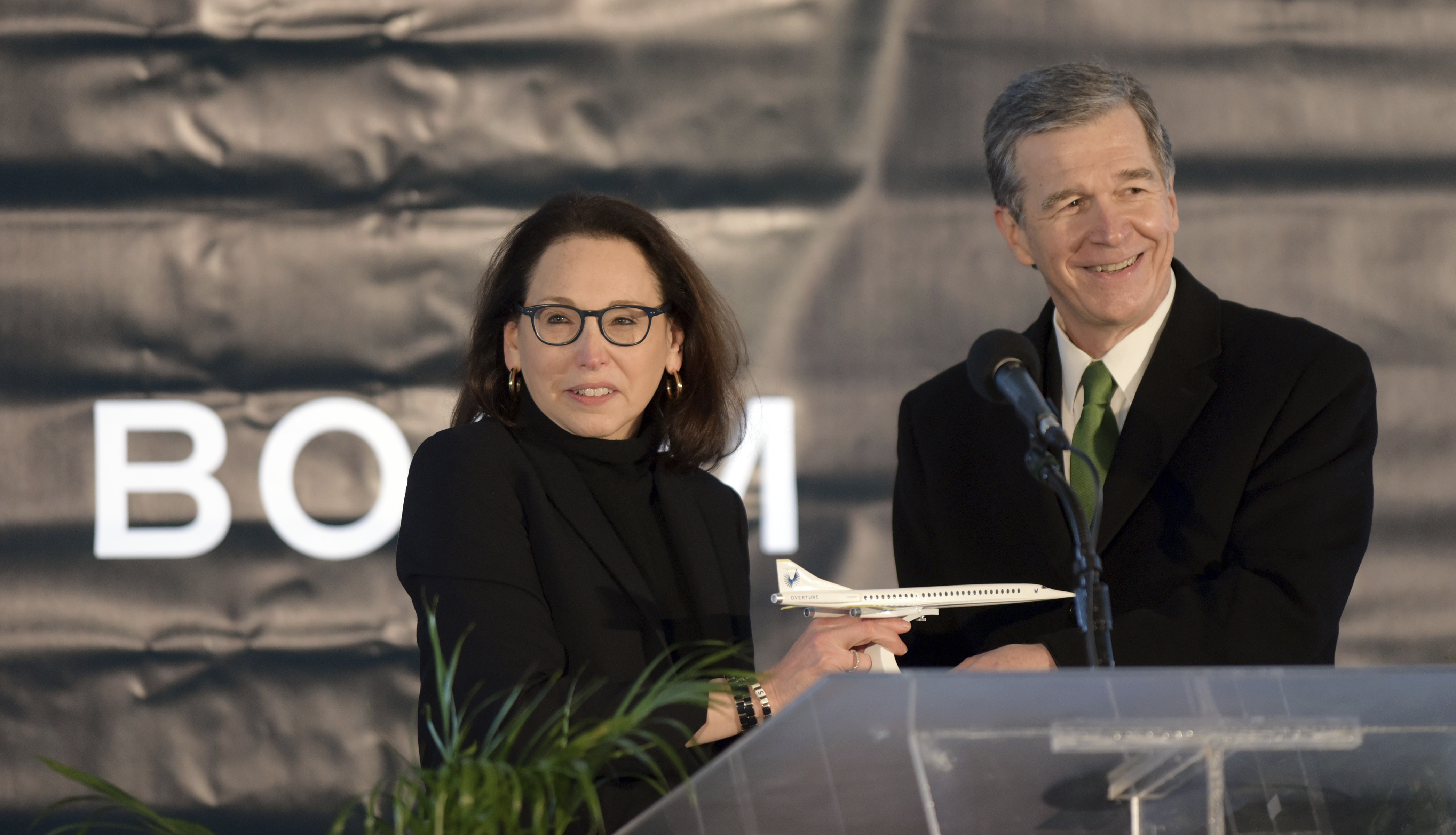 North Carolina Gov. Roy Cooper receives a model of Boom Supersonic's Overture jet from Boom's President and Chief Business Officer Kathy Savitt during an announcement, Wednesday, Jan. 26, 2022 that the aviation company will build its supersonic jet at Piedmont Triad International Airport in Greensboro, N.C. The company said it will employ more than 1700 people by the end of the decade. (Walt Unks/Winston-Salem Journal via AP)