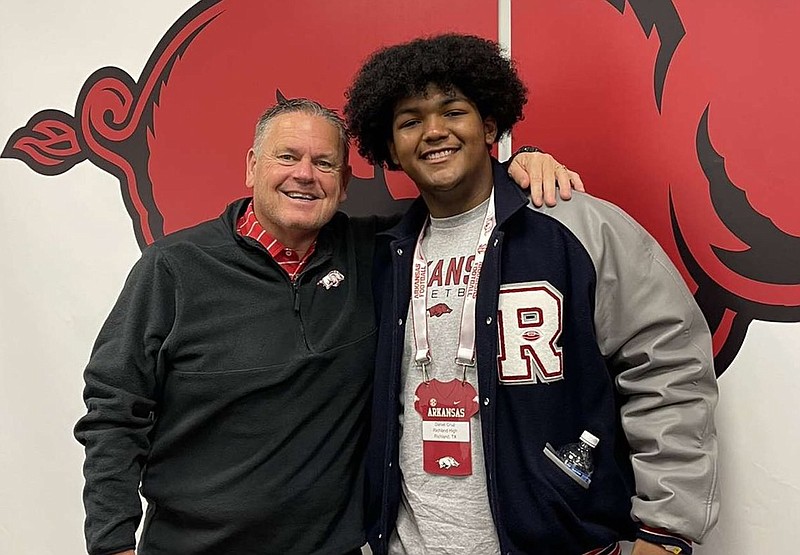 Daniel Cruz, 6-4, 287 pounds, of North Richland Hills (Texas) Richland, has offers from Arkansas, TCU, Baylor, SMU and Tulsa. He was a 4-5A-I first-team all-district selection as a sophomore.

"The part that stuck out to me was Coach Pittman, how nice he was and how he asked questions about my family,” Cruz said. “It felt like an actual family going there. Coach Briles being great, Coach Yurachek, it was overall just a great experience. I would definitely love to come back.”

Cruz, who started as a freshman at the varsity level, said he will return.

"Definitely a visit in the future. Definitely thinking about that,” he said. “I'm going to ask my mom and see what my coaches think, but I definitely see myself coming back here for a visit.”

While it is early in the recruiting process, Cruz is very fond of the Razorbacks.

"I definitely like them a lot right now,” Cruz said. “They’re pretty great and I'd definitely love to see more of them.”

Lonoke’s Chauncey Johnson, 6-4, 295, is a promising prospect who should see his share of major-college attention. He and numerous other prospects attended Arkansas’ 77-68 victory over West Virginia in Bud Walton Arena.

“To me, the highlights of the visit was the atmosphere (in) the whole facility,” said Johnson, pictured below. “The coaches really made it feel like home when I was up there. The atmosphere of the basketball game was really amazing – something like no other.” 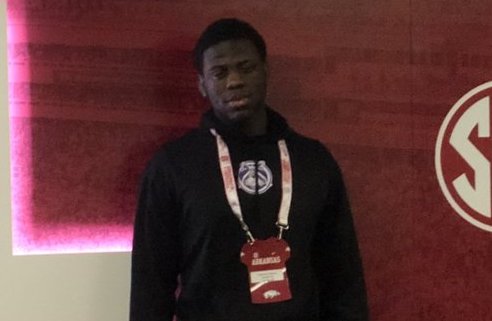 He was named to the Arkansas Democrat-Gazette All-Arkansas Preps Underclassman team after grading at 81% and having 67 pancakes/knockdowns.

Johnson plans to come back to Fayetteville after the urging of offensive line coach Cody Kennedy.

“Coach Kennedy told me to keep working and getting better, “ said Johnson, who is also drawing interest from Missouri. “He also wants to get me in for spring practices and camps in the summer.”