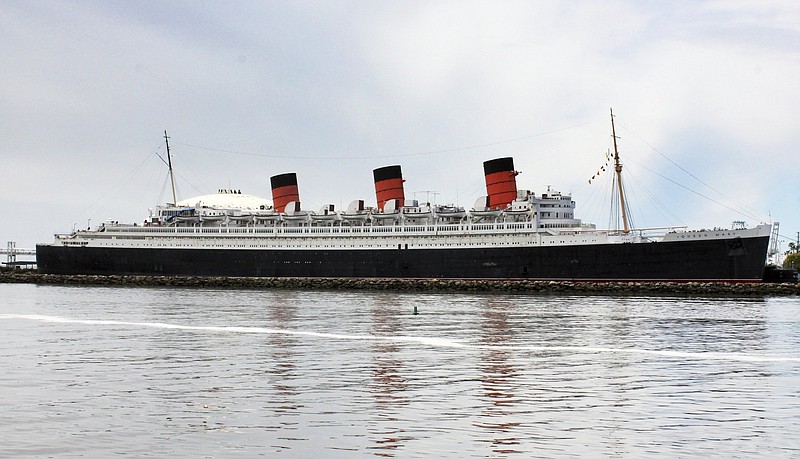 The retired Cunard ocean liner Queen Mary is seen at its permanent mooring in the harbor at Long Beach, Calif. The historic ocean liner, a Southern California tourist attraction and hotel for decades, is being prepared for “critical repairs,” the city of Long Beach said Thursday. (AP)

A $5 million repair project will begin next month to reopen the Queen Mary to the public, marking the latest step to keep the beleaguered Long Beach, Calif., tourist attraction afloat.

The former ocean liner turned floating hotel closed in May 2020 because of the pandemic. It has been the subject of several studies to gauge the work needed to keep the vessel open to tourists and prevent parts of the ship from flooding. The 88-year-old ship is in such disrepair that the city of Long Beach had considered the option of sinking it after taking control of the vessel from the lease operator last year.

Long Beach officials said Thursday that the $5 million in crucial repairs should be completed by the end of 2022.

"Addressing these critical repairs has been a long time coming," Long Beach Councilwoman Mary Zendejas said in a statement.

The company that held the lease to operate the ship, Eagle Hospitality Trust, filed for bankruptcy protection in January 2021 and agreed to surrender its lease agreement in June. Long Beach, which owns the ship and the property around it, said Eagle Hospitality defaulted on several provisions of the lease, including failure to maintain the aging ship.

Over the past 50 years, Long Beach has recruited several companies -- including Walt Disney Co. -- to manage the ship and develop the adjacent oceanfront property, with mixed results. Before the pandemic, the ship generated $3.3 million in tax revenue annually from its operation as a hotel, a venue for concerts and festivals, and as a film location.

Previous studies since 2017 estimated the ship needs as much as $289 million in renovations and upgrades to keep parts of it from flooding. According to inspection reports released last year by city-hired marine engineering firm Elliott Bay Design Group, the Queen Mary needs $23 million in immediate repairs to prevent it from potentially capsizing.

The $5 million in work will represent the first phase of the most crucial repairs, according to the city of Long Beach.

The upgrades will include the removal of deteriorating lifeboats that exert stress and create "severe cracks" in the ship's support system, the city said in a news release. Thirteen original lifeboats will be removed from the ship and temporarily stored while the city determines whether there is any interest from museums and other nonprofit groups to preserve them.

The city also plans to install permanent bilge pumps to remove water intrusion in the event of an emergency and make improvements to the bulkhead, emergency generator and the "water intrusion warning system," according to the city. Other electrical work, including lighting for one of the ship's huge exhaust funnels, have already been completed.

Half of the funding for the initial repairs will come from the city's Tideland Funds, which are generated by permit fees, parking revenue and rents from various waterfront concessions and leases along the shore. The funds are set aside for the maintenance, operation and repairs of the marinas, beaches and waterways, the convention center, the Queen Mary and other facilities along the shoreline.

The other half of the funding is expected to be approved by the City Council in the next few months.

The Queen Mary was launched in 1934 and arrived in Long Beach harbor at the end of its final voyage in 1967.