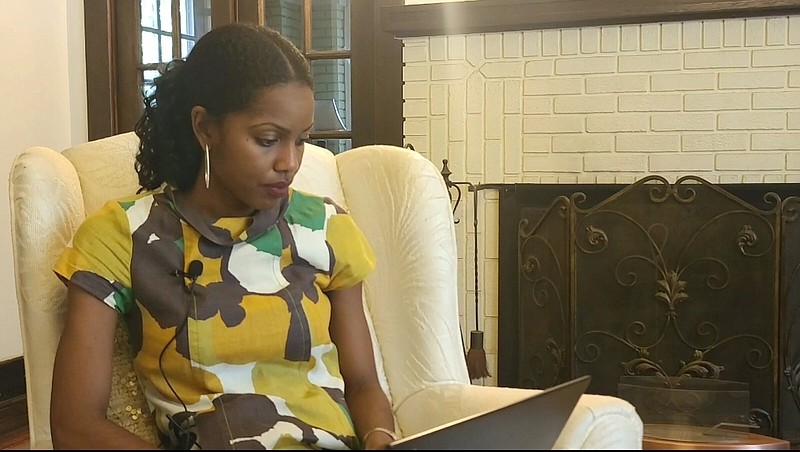 Council Member Joni Alexander reviews surveillance footage of herself being robbed at gunpoint in front of her home. Video at arkansasonline.com/71alexander/. (Pine Bluff Commercial/Eplunus Colvin)

It was an out-of-body experience for Pine Bluff Council Member Joni Alexander as she watched surveillance footage from a robbery that occurred early Sunday morning in front of her home in the 300 block of Martin Street.

What started as a fun night on the town with her cousin from out of town ended traumatically for the Ward 1 council member, who did not seek re-election.

"Three black males, all armed with assault rifles, decided to gamble with my life," said Alexander. "It still feels surreal, but I'm thankful that my family and I are still alive."

According to documents provided by the Pine Bluff Police Department, at approximately 5 a.m. on June 26, officers Joshua Lane and Tiffany Wood were flagged down at the Jefferson County jail by Alexander, who told the officers she was robbed at gunpoint at her residence and her purse was stolen.

Alexander stated she had a .22 caliber pistol, two cell phones, and credit cards in her purse, with a combined value of about $4,000.

After the assailants ran away, Alexander told her cousin to leave and go get help, but she quickly realized she had no way to communicate other than by using the emergency walkie talkies provided to all city council members. The communication devices can only be used to send out an emergency signal, which she triggered. Faced with uncertainty, she hurriedly left her home to seek help.

Alexander's cousin circled the neighborhood while making a 911 call, which lasted approximately five minutes after the 911 dispatcher returned the call, stating she had missed a call from that phone number.

In the background of the 911 call, one can hear an emergency signal going off -- the one that Alexander's walkie talkie was causing -- and a dispatcher asking: "Whose alert phone is going off?" "I don't know," someone else said.

The cousin, who was afraid the suspects were still lingering and unsure of Alexander's safety, seemed frustrated by the length of the call, as several seconds were spent in silence as the emergency signal went off in the background

Alexander, who said she had to leave the driveway she had just been robbed in, came back to her residence with the officers to give them her statement. She told the officers that she was dropped off by her cousin and while speaking to her cousin, three Black males approached her on foot with large firearms, telling her to "shut up" as she let out a frantic scream. One of the suspects took her purse, while another fired shots in the air as he ran away.

Sgt. Sabrina Washington, the responding officer, arrived at Alexander's residence around 6 a.m., where she was briefed by Lane.

Lane described Alexander as "frantic" and someone who had "blatant expressions of fear."

Washington relieved Lane of his shift duties and stayed with Alexander, who stated she might still be in shock due to the incident.

"Mrs. Alexander stated she has security cameras around her residence and that they should have captured the entire incident, but she could not access the footage at this time because her phone was just stolen," said Washington.

Alexander told Washington the suspects fled north. Washington said in her report that she left the scene, traveling north in the direction that Alexander stated the suspects ran, in an attempt to locate any evidence that would indicate gunshots being fired in the area. While walking the grounds in the area, she located 11 .223 caliber shell casings and four 7.62 mm shell casings.

Washington had left the area afterward to assist with another call when she received information from dispatch that Jefferson County Judge Gerald Robinson, Alexander's husband, had located shell casings in the street of their residence and that he had recovered the surveillance footage.

Later that morning, Alexander learned the status of her belongings, after Robinson received a phone call from Alexander's sister.

"My whole family, all of our phones are connected on find my friends," said Alexander, who noted that her sister located the address on Chestnut Street where Alexander's phone was showing to be located. "I know that neighborhood is right behind my street, two blocks back, so we told the officers."

As police shifts were changing around 7 a.m., Washington said she received a phone call from Robinson stating he had found a way to track the stolen phone and that it was pinging from the area of 804 South Chestnut St.

"I told Mr. Robinson I would relay this information to the day shift supervisors and patrolmen so they could follow up on this incident," said Washington.

According to reporting officer Lt. Marcus Smith, he along with Detective Keith Banks and other officers arrived at the location in the 800 block of South Chestnut and made contact with a 26-year-old woman who gave the officers consent to search the home around 8:15 a.m.

Banks reported that he located a Draco assault rifle hidden inside an air vent. The officers were advised by the woman that two Black males were armed and inside a locked room. According to the report, the back bedroom door was locked.

According to Alexander, she, Robinson and her pastor went to the scene, where her stolen items were, to show the officers the surveillance footage.

A Black man later identified as Rodney Whitmore, age 30, who police say fit the description of one of the suspects, was sitting on the front porch of a home on the same street, South Chestnut.

According to Banks, while officers were on Chestnut, Whitmore was there observing the officers who were on the scene. "Ms. Alexander approached the officers with the video of the robbery. One of the suspects showed to be Rodney Whitmore. He was taken into custody and transported to the Pine Bluff Police Department," said Banks.

At 11:14 a.m., Whitmore was read his Miranda Rights. According to the report, Whitmore admitted being involved in the robbery. He stated he did not know the names of the other two suspects. Whitmore was held in connection with charges of aggravated robbery and theft of property and transported to the Jefferson County jail.

Officers stated that, during the investigation, one witness reported seeing Whitmore with a black purse and a handgun. The witness also stated Whitmore said he robbed a woman and that was how he obtained the purse, according to police.

The purse and phones were later recovered behind 804 S. Chestnut St. by Robinson, Alexander and her pastor. The phones had been broken and the purse was burned. Alexander said her pastor also noticed a rifle, shoes and a backpack.

Officers said they received a phone call from Robinson saying his wife's cell phone and black purse had been found. Officers went back to the address and met with Robinson and Alexander.

An AR-15-type rifle partially buried underneath some leaves was recovered by crime scene tech MD Shahriyar, who was called to process the crime scene. Shahriyar looked inside the backpack and located a Glock 42. According to the report, both guns and the Glock 42 came back as having been stolen out of Pine Bluff on Mar. 27.

There are still two other suspects at large, people who, according to Alexander, "got absolutely nothing out of it, other than just terrorizing the neighborhood."

Alexander faults the incident on several variables and said this incident confirmed she made the right decision not to seek re-election for city council.

"We have a problem in Pine Bluff," said Alexander. "If not addressed, I guess it's inevitable that one day you or your loved one may come face to face with it." 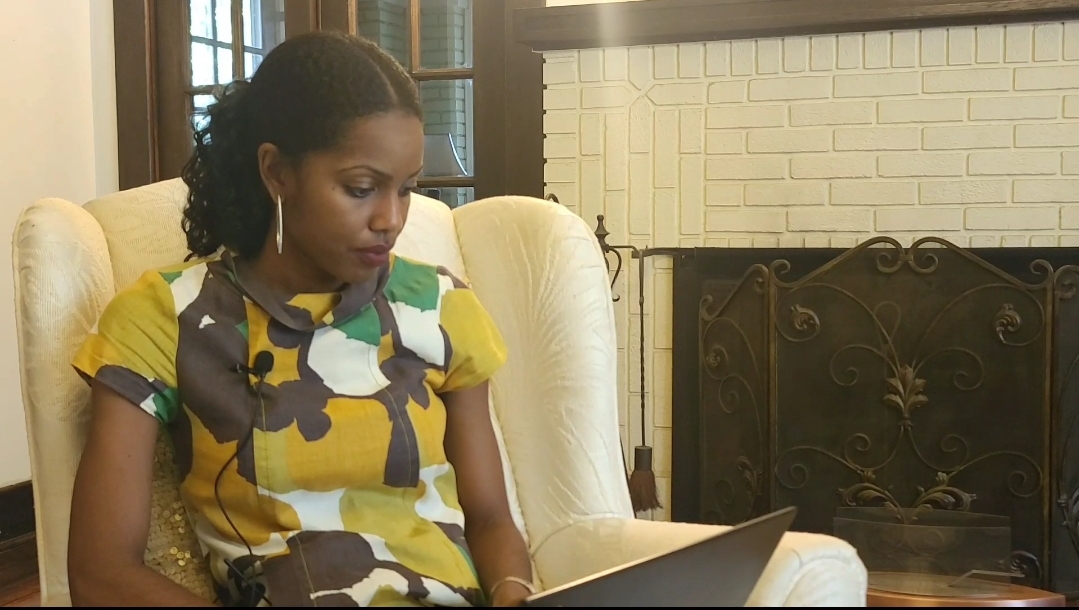 Council member Joni Alexander reviews surveillance footage of herself being robbed at gunpoint in front of her home. (Pine Bluff Commercial/Eplunus Colvin)