Justices rein in authority of EPA 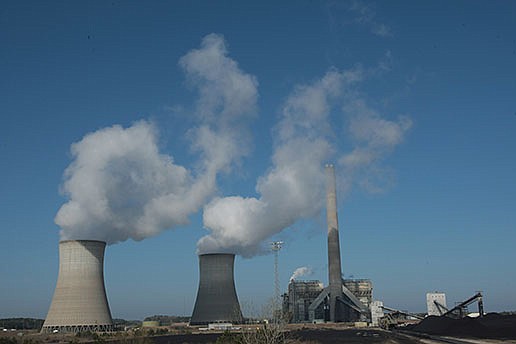 The Supreme Court on Thursday limited the EPA’s ability to regulate emissions from power plants such as the White Bluff plant near Redfield, shown in 2008. (Democrat-Gazette file photo)

The vote was 6-3, with the court's three liberal justices in dissent, saying that the majority had stripped the EPA of "the power to respond to the most pressing environmental challenge of our time."

Chief Justice John Roberts, writing for the majority, said Congress had not clearly given the agency sweeping authority to regulate the energy industry.

"Capping carbon dioxide emissions at a level that will force a nationwide transition away from the use of coal to generate electricity may be a sensible 'solution to the crisis of the day,'" he wrote, quoting an earlier decision. But, he added, "a decision of such magnitude and consequence rests with Congress itself, or an agency acting pursuant to a clear delegation from that representative body."

In dissent, Justice Elena Kagan wrote that the court had substituted its own policy judgment for that of Congress.

"Whatever else this court may know about, it does not have a clue about how to address climate change," she wrote. "And let's say the obvious: The stakes here are high. Yet the court today prevents congressionally authorized agency action to curb power plants' carbon dioxide emissions."

President Joe Biden, in a statement, called the ruling "another devastating decision that aims to take our country backwards. While this decision risks damaging our nation's ability to keep our air clean and combat climate change, I will not relent in using my lawful authorities to protect public health and tackle the climate crisis."

University of Georgia meteorology professor Marshall Shepherd, a past president of the American Meteorological Society, said of the decision: "It feels like a gut punch to critical efforts to combat the climate crisis which has the potential to place lives at risk for decades to come."

Richard Revesz, an environmental expert at the New York University School of Law, called the decision "a significant setback for environmental protection and public health safeguards."

But he said in a statement that EPA still has authority to address greenhouse gas emissions from the power sector.

EPA spokesman Tim Carroll said the agency is reviewing the decision. "EPA is committed to using the full scope of its existing authorities to protect public health and significantly reduce environmental pollution, which is in alignment with the growing clean energy economy," Carroll said.

Patrick Morrisey, the attorney general of West Virginia and one of the leaders of the challenge to the EPA's authority, welcomed the decision.

"EPA can no longer sidestep Congress to exercise broad regulatory power that would radically transform the nation's energy grid and force states to fundamentally shift their energy portfolios away from coal-fired generation," he said.

"The Court has undone illegal regulations issued by the EPA without any clear congressional authorization and confirmed that only the people's representatives in Congress -- not unelected, unaccountable bureaucrats -- may write our nation's laws," McConnell said in a statement.

Richard Lazarus, a law professor at Harvard, said "the court's ruling is a major setback for EPA's ability to address climate change, and it could hardly have come at a worse time."

"By insisting instead that an agency can promulgate an important and significant climate rule only by showing 'clear congressional authorization' at a time when the court knows that Congress is effectively dysfunctional, the court threatens to upend the national government's ability to safeguard the public health and welfare at the very moment when the United States, and all nations, are facing our greatest environmental challenge of all: climate change," he added.

The ruling curtailed but did not eliminate the agency's ability to regulate the energy sector. The agency may still use measures such as emission controls at individual power plants. But the court ruled out more ambitious approaches such as a cap-and-trade system at a time when experts are issuing increasingly dire warnings about the quickening pace of global warming.

The implications of the ruling could extend well beyond environmental policy and further signal that the court's newly expanded conservative majority is deeply skeptical of the power of administrative agencies to address major issues facing the nation and the planet.

That skepticism has been evident in recent decisions arising from the coronavirus pandemic. The court ruled, for instance, that the Centers for Disease Control and Prevention was not authorized to impose a moratorium on evictions and that the Occupational Safety and Health Administration was powerless to tell large employers to have their workers be vaccinated or undergo frequent testing.

The question before the justices in the new case, West Virginia v. Environmental Protection Agency, No. 20-1530, was whether the Clean Air Act allowed the EPA to issue sweeping regulations across the power sector. More broadly, the court was asked to address whether Congress must "speak with particular clarity when it authorizes executive agencies to address major political and economic questions."

The court has called this inquiry the "major questions doctrine."

Last year, on the last full day of Donald Trump's presidency, a federal appeals court in Washington struck down his administration's plan to relax restrictions on greenhouse gas emissions from power plants. The Trump administration said the Clean Air Act unambiguously limited the measures the agency could use to those "that can be put into operation at a building, structure, facility or installation."

A divided three-judge panel of the court, the U.S. Court of Appeals for the District of Columbia Circuit, ruled that the Trump administration's plan, called the Affordable Clean Energy Rule, was based on a "fundamental misconstruction" of the relevant law, prompted by a "tortured series of misreadings."

"The EPA has ample discretion in carrying out its mandate," the decision concluded. "But it may not shirk its responsibility by imagining new limitations that the plain language of the statute does not clearly require."

The panel did not reinstate a 2015 Obama-era regulation, the Clean Power Plan, which would have forced utilities to move away from coal and toward renewable energy to reduce emissions.

But it rejected the Trump administration's attempt to replace that rule with what critics said was a toothless one.

The appeals court's ruling also cleared the way for the Biden administration to issue stronger restrictions.

The Obama-era plan had aimed to cut emissions from the power sector 32% by 2030 compared with 2005 levels. To do so, it instructed every state to draft plans to eliminate carbon emissions from power plants by phasing out coal and increasing the generation of renewable energy.

The Clean Power Plan never came into effect. The Supreme Court blocked it in 2016, effectively ruling that states did not have to comply with the measure until a barrage of lawsuits from conservative states and the coal industry had been resolved. That ruling, followed by changes in the court's membership that have moved it to the right, has made environmental groups wary of what the court might do in cases on climate change.

Arkansas has five coal-fired electric plants, the Entergy Arkansas-run White Bluff plant near Redfield and Independence plant near Newark -- both scheduled to close by the end of 2028 -- the Southwestern Electric Power Co. and Arkansas Electric Cooperatives-owned Flint Creek plant near Gentry, the John W. Turk plant in Fulton and the Plum Point Energy Station in Osceola.

Information for this article was contributed by Adam Liptak of The New York Times, Mark Sherman, Matthew Daly, Seth Borenstein and Cathy Bussewitz of The Associated Press and Robert Barnes and Dino Grandoni of The Washington Post.