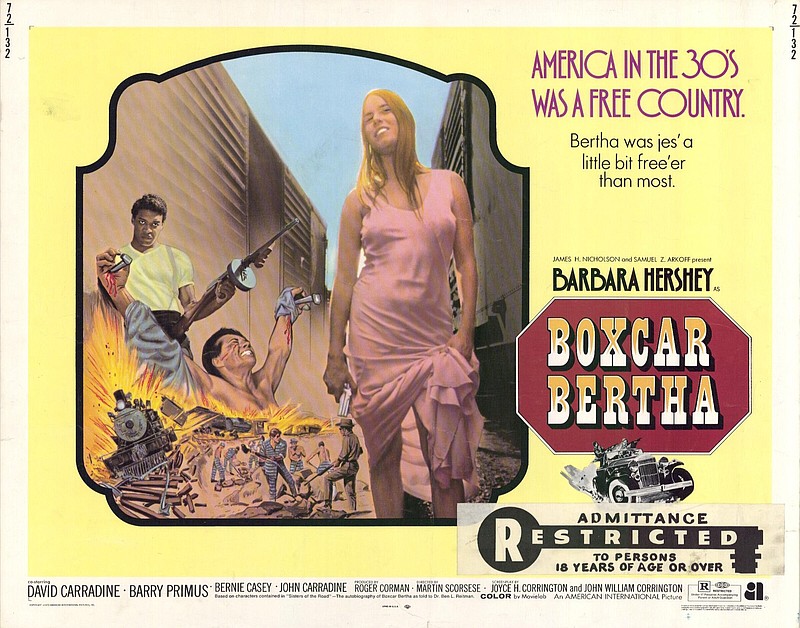 Because so many of Oscar-winner Martin Scorsese's movies have been set and shot in his native New York, it's easy to forget that his first movie for a Hollywood studio was actually filmed near Camden.

Furthermore, the Arkansas influence on the 79-year-old filmmaker is inescapable.

Because it was made for the paltry sum, even in 1972, of $600,000 and was shot in a mere 24 days, it's hard to think of "Boxcar Bertha" as one of Scorsese's movies. Unlike "The Irishman," "Casino" or "The Wolf of Wall Street," the film runs a taut 88 minutes. The director didn't have access to de-aging software or other amenities at his disposal at the time. That's probably because "Boxcar Bertha" was only his second feature-length movie.

His 1968 Big Apple-shot debut "Who's That Knocking at My Door" gained the following praise from Roger Ebert: "[a]s a film, it has something to say to everyone. As a technical achievement, it brings together two opposing worlds of American cinema."

It plays like a rough draft for his later masterpiece "Mean Streets," but hardly anyone saw it. So Scorsese paid his bills by working as an editor on the Woodstock documentary and later assembling the montages in "Elvis on Tour."

One person who did catch Scorsese's firstborn was exploitation producer Roger Corman, who was still releasing his movies through American International, the company that released his low-budget Edgar Allen Poe adaptations like "The Pit and the Pendulum" and his youth-skewing films like "The Wild Angels."

Corman earned the nicknames "The Prince of Profit" and "The King of the Bs" because he found audiences for his discount fare. With "Boxcar Bertha," he bet that audiences were eager for another violent, Depression Era story like Arthur Penn's "Bonnie and Clyde." With the demise of the production code in 1968, Corman's movies also featured nudity, profanity and other content previously forbidden. Car chases and explosions were also part of the formula.

Needless to say, young men were eager to see what Corman had to offer. Furthermore, the anti-establishment attitude that permeated the Vietnam era made his stories all the more appealing.

ANOTHER LAND OF OPPORTUNITY

Corman has a knack for creating astonishing visuals without squandering limited meager studio resources. His "The Fall of the House of Usher" begins with the hero riding his horse though an ash-filled, hazy wasteland that perfectly sets the mood. Corman had read in a newspaper about a forest fire near Los Angeles and rushed to get the shots while the smoke was still lingering.

At a conventional studio, "Boxcar Bertha" would have been potentially expensive because of the sets needed to re-create the era. In Camden and Reader and in Ouachita County, there were several '30s-era buildings that were still standing. As the title implies, it's a railroad story, and according to the Encyclopedia of Arkansas, the Possom Trot Line of the Reader Railroad between Reader and Camden had the vintage equipment needed for the movie.

While "Bonnie and Clyde" loosely dealt with real-life bank robbers Bonnie Parker and Clyde Barrow and "Bloody Mama" was based on outlaw Ma Barker, the origins of "Boxcar Bertha" are murkier. According to Keith Phipps of TheRinger.com, doctor and anarchist (as well as one of Emma Goldman's lovers) Ben Reitman based his "Sister of the Road: The Autobiography of Box Car Bertha" on what he claimed was a combination of three female hobos he encountered while he was treating patients who couldn't afford conventional medical care.

The finished film, which was adapted by "The Omega Man" screenwriters Joyce Hooper Corrington and John William Corrington, still includes much of Reitman's pro-union sentiments, even if trying to locate the "real" Bertha's biographical information might be futile.

As it stands, Bertha (Barbara Hershey, before starring in "Beaches" and earning an Emmy for "A Killing in a Small Town") is a young woman who becomes orphaned as a teen because her father's crop dusting plane crashes. She falls in with a railroad union organizer named Big Bill Shelly (David Carradine) and winds up becoming an outlaw when the railroads regularly push the police to arrest or even try to kill Bill and his compatriots Rake Brown (Barry Primus) and Von Morton (Bernie Casey).

Because simply unionizing the railroads puts them on the wrong side of the law, Bertha's troupe takes up robbing banks and trains, and she later works in a brothel. (You can spot Scorsese as one of her clients.) True to Corman's formula, you can set your watch to Bertha's first nude scene. Corman didn't want to make his viewers wait more than a few minutes for skin or vehicular mayhem.

Nonetheless, the fledgling director still managed to make "Boxcar Bertha" his own. Scorsese, who briefly studied to be a priest, explores some of the same religious themes he'd cover in "Mean Streets," "The Last Temptation of Christ," "Kundun" and "Silence." In one of the more memorable sequences, a smug railroad magnate (delightfully played by Carradine's father, John) tells Big Bill he shouldn't be robbing him and his upper-class ilk but should be storing treasure in heaven. The robber says that sounds hollow coming from someone with a fat bank account.

Somehow, Scorsese and company even work in a crucifixion that would seem right at home either in "The Last Temptation of Christ" or "Silence." Despite the tight schedule, Hershey introduced Scorsese to Nikos Kazantzakis' novel of the former film, and he later cast Hershey as Mary Magdalene. Victor Argo, who has a supporting role in "Boxcar Bertha," plays the apostle Peter.

While toxic masculinity has often been a subject in his movies like "GoodFellas," "Boxcar Bertha" is intriguing because Bertha frequently rescues the men in her life and takes control of her destiny. While Hershey projects a winning innocence throughout the movie, her Bertha is frequently smarter than the guys around her. Despite the downbeat ending, it's easy to see why she might have more of a future than they will. In this light, his work on the female-centric "Alice Doesn't Live Here Anymore" and the Netflix documentary series "Pretend It's a City" about Fran Lebowitz don't seem like anomalies.

Scorsese took the helm of "Boxcar Bertha" after having been fired from the 1970 movie "The Honeymoon Killers." To prep for his film for Corman, Scorsese drew up 500 storyboard sketches for each shot and managed to deliver the tawdry delights Corman wanted while also coaxing solid performance and more entertainment than one might expect from a "Bonnie and Clyde" knock-off. When Corman saw Scorsese's sketches, he knew the investment wasn't going to waste.

When the movie was released on June 14, 1972, it was a part of a double bill with "1000 Convicts and a Woman." Scorsese was probably not practicing any award acceptances speeches under those circumstances. Like Francis Ford Coppola and Peter Bogdanovich before him, he ended up moving to more prestigious and expensive projects afterward.

As fellow Corman alumnus John Sayles ("Lone Star," "Passion Fish") put it, "You work for Roger until he can't afford you anymore."

In Mary Pat Kelly's "Scorsese: A Journey," Hershey recalls, "If I was doing 'Boxcar Bertha' now, I would have gotten much more out of it. But it was the most fun I'd ever had on a movie."

Back in Arkansas, people in Ouachita and Nevada counties didn't think they had encountered future greatness in Scorsese and Hershey, whose mother has Natural State roots. Sadly, many residents didn't share Hershey's enthusiasm.

In a 2012 guest column for this newspaper, Margaret Jane Gatewood recalled, "With thunderous applause, the curtain went up on the premiere of 'Boxcar Bertha' in Camden. Quickly thereafter, the house came down. Every 15 minutes, there was some kind of offensive or otherwise provocative scene, followed closely by violence. Women gasped and covered their eyes. Barely recognizable were any of the Camden people; the backs or tops of their heads were visible. Only two actors had their names published in acknowledgement."

Scorsese later made the charming children's offering "Hugo," but Arkansas shows up in a lot of the work that has followed "Boxcar Bertha." His concert film "The Last Waltz" features Turkey Scratch's Levon Helm, whose tales of discovering blues clearly seems to have rubbed off on the director. Scorsese later produced and directed an episode of the documentary series "The Blues."

Helm's co-conspirator in The Band, Robbie Robertson, had toured with Helm as part of Arkansan Ronnie Hawkins' The Hawks. In Robertson's "Somewhere Down the Crazy River," which Scorsese directed the video for, you'll hear a reference to the popular Helena joint Nick's Cafe.

Neither Hershey nor Scorsese were available to comment. It was disappointing because it would have been worth asking them what their experiences in Arkansas mean to them now.

The letdown has been mitigated by the fact that Scorsese is currently in post-production on "Killers of the Flower Moon," about the real life murders of Osage Tribe members in Oklahoma a century ago. The new film stars Leonardo DiCaprio, Robert De Niro, Lily Gladstone, Jesse Plemons, Tantoo Cardinal and John Lithgow. The new movie was filmed in Oklahoma, and it's doubtful he'd be making it if he hadn't learned some important lessons while making a film here.